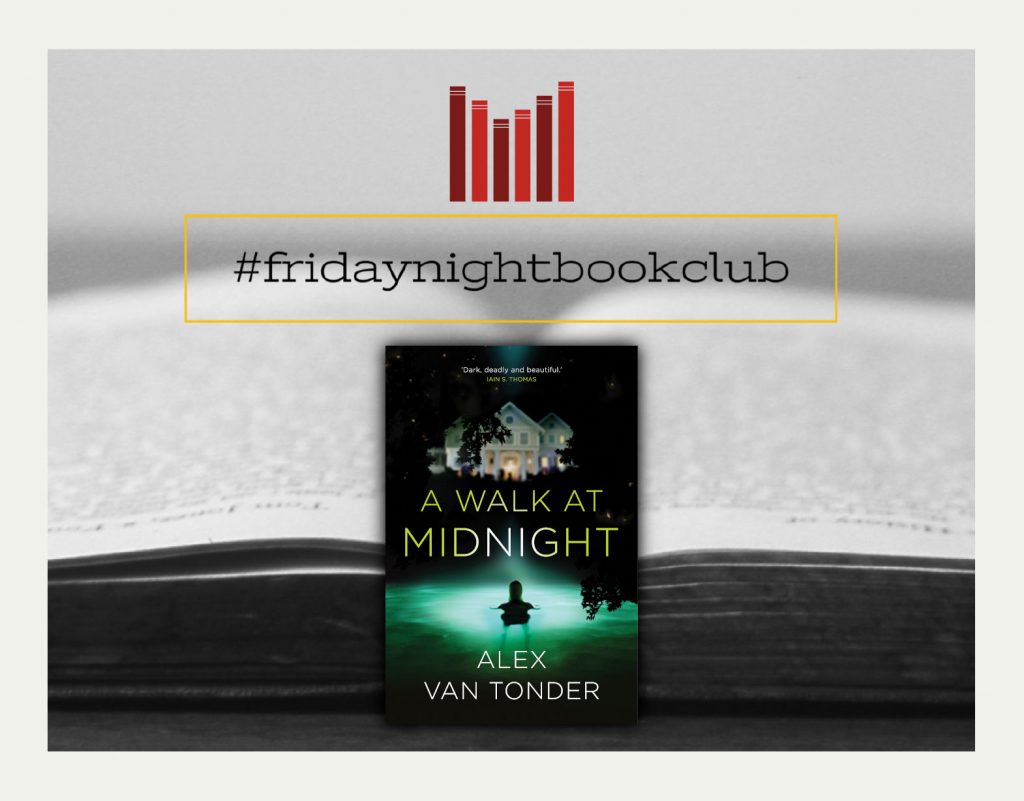 Staying in this evening? Get comfortable with a glass of wine and A Walk at Midnight, Alex van Tonder’s ‘dark, deadly and beautiful’ new novel.

In this carefully crafted psychological thriller, all is not what it seems. A ‘griplit’ novel at its best, Van Tonder captures domestic suspense at its finest.

‘I am unleashed from my mother’s womb while she is choosing tomatoes at Ralphs. My birth is one of her favourite stories to tell.’

Jane Ronson is the epitome of a dutiful, devoted wife and mother. She has, with grit and grace, supported her husband, Colin, through the scandals and setbacks that have dogged his career as the Governor of New York State. After years in her restrictive role as the governor’s wife, Jane achieves her own success as a writer, and is offered a publishing deal for her debut novel. This exciting news is overshadowed by Colin’s sudden death under mysterious circumstances that eerily echo events that unfold in Jane’s novel, making her the primary person of interest in the investigation.

As Jane’s and Colin’s pasts emerge in the course of the investigation, the truth becomes increasingly elusive and disturbing.

Alex van Tonder is the author of two novels, This One Time and A Walk at Midnight. She began her award-winning writing career in advertising in Cape Town, and now lives in Manhattan Beach, Los Angeles, with her husband and cat.

JANE RONSON/WIFE OF THE DECEASED

‘Detectives, before we get started, can I offer you some lunch? My daughter can warm you up some tomato soup if you’re hungry. She made it herself.’

‘We don’t normally eat during interviews …’

‘Please. I insist. It would make me feel better. You wouldn’t deny a widow a small consolation?’

[The sound of a man sighing.]

‘Tomato soup would be very nice, Mrs Ronson. Thank you.’

[The sound of plates being set down, chairs shuffling into place.]

‘We’re very sorry for your loss.’

‘Thank you, Detectives. It’s been very hard for us. For me, almost unbearable. Colin was my rock.’

‘And in your latest book, your main character kills her husband. By pushing him off a roof.’

‘And your husband died not sixteen hours ago, by falling off a roof.’

‘He did. It’s been really hard on all of us, I’m sure you understand.’

‘You must know that there is something about this that looks suspicious, Mrs Ronson. Mind if I call you Jane?’

‘Detective, I loved my husband, with all my heart. We went through a lot together, as you know. As everybody knows. In a marriage this high profile, to be his wife was, at its best, an honour and a privilege. At its worst? It was marriage. Not always smooth. But I didn’t kill him.’

‘We’re not saying you did. We have to look at all angles; that’s our job. Your husband was an important man. People are going to have questions.’

‘I know who my husband was. I stood by his side for all these years, helped him get to where he was. Do you not think this isn’t tragic for me, too?’

[The sound of a woman weeping.]

‘It just seems a little … [Pause] odd. That you would write a book about a woman pushing her husband off the roof after years of hating him. And then your own husband dies … [Softly] He fell off a roof, Mrs Ronson—’

‘Can you please stop with this line of questioning? I don’t like what you’re implying, Detective. If you’re accusing me of killing my husband, I would like a lawyer.’

Everyone has a birth story. The story your mother, if you are fortunate enough to have one, tells you about how you are born. How you made your introduction into this world; a story with portent and forewarning, something of a taste of things to come. My mother’s story has always been consistently ambiguous. I am unleashed – her word, not mine – from her womb on a Wednesday night in the fall of 1999, while she is out running errands. She calmly sets down her basket and drives herself to the hospital, leaking amniotic fluid all over her car seat, the carpets. She describes the day as something of a slow, drawn-out disaster: my father was working; my elder sister had been sick for days with an ear infection. The geyser had burst, gushing its own falls into the linen closet in my parents’ bedroom.

‘I really wasn’t in the mood to give birth,’ she’d tell me.

‘Nor were you. You wanted to come out, but then you changed your mind. Over and over. Finally, they sliced me open and yanked you out. But not before you did some damage.’

I ask to see photographs, like the ones they have of my parents holding Candice up proudly, my father’s arm around the doctor. Unlit cigar in his mouth. ‘We didn’t take photographs, darling. It was too gruesome, and your father got there too late.’ When I ask my father, peering over his desk in his study, slightly scared of him – always slightly scared of him – he peers back at me as if he doesn’t understand why I’m asking what I’m asking.

‘I got there late because of a big case. Your mother nearly died from blood loss. Nobody was taking photographs.’

Your mother nearly died. These words stay with me through my life.

The operation leaves a long, tilting scar across my mother’s belly. I ask her what it is and she tells me it’s a wound from a war she fought in. I ask her, which war?

‘The great battle of you!’

She taps me on the nose.

‘Kidding, sweetheart. This is where you came out of Mommy.’ After her bath, I watch her rub tissue oil into it, as if it might go away if she presses harder, rubs faster. I was nothing like my elder sister, Candice, she tells me. ‘She slipped out like a bar of soap! I bent over one day and there she was, grinning and ready for life. Gorgeous little thing.’

My mother sloshes more tissue oil onto her hand, rubbing it into the scars. A cheerful announcement is made in the newspaper. To George and Sarah Greene, a baby girl, sister to Candice. Although my mother performs her doting, happy-mother duties diligently, it is clear that I upset the calm in the three-person household in the charming blue and white colonial on Chapel Street in New Haven, Connecticut. I am a difficult baby; allergic to my mother’s breast milk, sensitive to light and sound and scratchy fabric. She is constantly monitoring my comfort levels, desperately trying to get me to shut up. She makes jug after jug of powdery formula that never quite mixes right and clogs the bottle, which means more crying. She unclogs the bottle and I get the formula in chunks in my mouth, and that makes me cry, too.

That’s what you do. You take what you can get.

My parents don’t know what to do with a needy child. They themselves were raised by starched conservatives who’d never had a hand in the raising of their own children. Infancy was something to be hurried along, soldiered through, you’re almost there now. The good parts remembered, captured on film and taped into photo albums; the bad parts pasted over with stories of ice cream by the sea and home videos of my sister and I playing in the pool, shrieking with delight on my father’s shoulders.

My sister backs up my mother’s story. ‘Such a noisy baby. Yelling out for Mom and Dad in the middle of the night.’ Night terrors. I feared the dark, they told me. I have few memories, mostly of the feelings … the fear, the dark shapes, but the worst feeling: no matter how much I cried, nobody was coming. When I was three years old, my sister Candice, tired of the howling coming out of the second bedroom, climbed into my bed and bit my nose.

My mother did her best to love her daughters equally, but Candice was easier to love than I was. My older sister was good dinner party conversation; engaging, positive content. ‘Candice won the Outstanding Student prize again this year, did we tell you?’ A child’s accomplishments are an excellent icebreaker; they allow the rest of the table to present the deeds of their own offspring. A feast of oxytocin. I’d watch their beaming faces, pride shining through their pores.

Shame seeping through mine, a black smoke coiling in my gut. My mother’s eyes would eventually fall to me. A falter, a flutter of guilt, a quick recovery.

‘Isn’t Jane just the most beautiful thing you’ve ever seen?’ Our guests indulge her. I’m a potato on matchsticks, barely seven.

My mother’s eyes, watering up. And so went my birth story. A troublesome child, I was. Difficult. There’s always one in every family.

In our family, it was me.