New book alert! No Retreat, No Surrender: The Inspiring Story of a World-Champion Sportsman and Cancer Warrior by Oscar Chalupsky – PLUS read an excerpt here
More about the book! 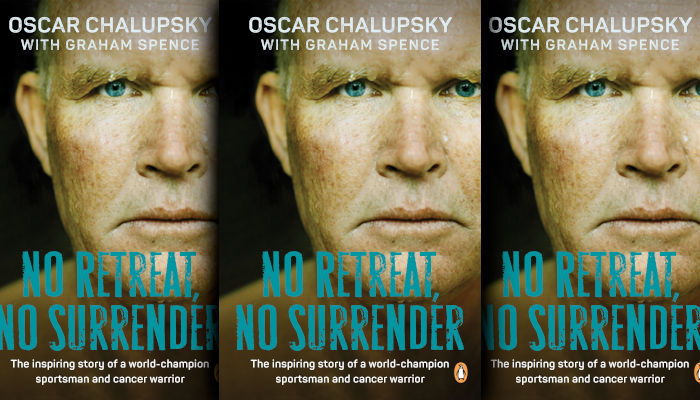 Penguin Random House has shared an excerpt from No Retreat, No Surrender: The Inspiring Story of a World-Champion Sportsman and Cancer Warrior by Oscar Chalupsky, with Graham Spence.

Few athletes hold a record comparable to that of Oscar Chalupsky. He made history at the age of 15 as the first person to win both the Junior and Senior Ironman titles on the same day at the South African National Lifesaving Championships, he was the country’s spokesman at the 1992 Barcelona Olympics, and he is a multiple-times global surfski champion, having won the internationally famous Molokai to Oahu World Surfski Marathon championships in Hawaii a record 12 times – his most recent victory being at the age of 49.

Then, in 2019, he was diagnosed with multiple myeloma, an incurable bone marrow cancer and told he had six months to live. But as with everything else Oscar does, he is determined to emerge victorious. He continues to paddle kayaks, play golf, and with a combination of medical treatment, exercise, iron determination and unconquerable optimism, he has defied every doctor’s prediction to date.

How does he do it?

In this book, Oscar relives some of his most exhilarating and nail-biting races, and shares the lessons he has learnt from winning on the international surf lifesaving, kayak and surfski circuits as well as running several successful businesses. The final chapters recount his courageous battle against cancer, the vital support of his family and friends, and his refusal to let the deadly disease dictate his life.

No Retreat, No Surrender is an uplifting account of grit, perseverance, talent and attitude, vividly capturing the determined mindset of an inspirational sporting legend.

They gave me two minutes to catch my breath. I had just won the Junior Ironman contest in the 1979 Natal Surf Lifesaving Championships. Now the starting gun was about to fire for the seniors.

It was unusual for a fifteen-year-old to compete in both age categories. There was no way someone in their early teens could square up against veteran surf swimmers, board paddlers and surfskiers in one of the most gruelling water events devised. It was physically impossible for a youngster to outswim, outrun and out-paddle fully grown men in peak condition.

Or so I was told. And merely by looking at the current reigning champion Andy Sutherland standing a few yards away, it was easy to see why. Supernaturally fit with a swimmer’s powerfully sloped shoulders and a paddler’s ripped arms, he was the prototype surf gladiator.

A lifesaving Ironman contest consists of swim, surfski and board legs raced out to the surf backline, around a set of turning buoys, and back ashore. Between each leg is a beach run around two flags, as well as a final sprint to the finish. Apart from being raced at full tilt, it is intensely exciting to watch as the lead can swap multiple times and more often than not is decided in the final few seconds.

As a specialist Ironman, Andy was not necessarily the fastest in any single leg, but his overall combination of strength, supreme stamina and unrelenting pace was almost invincible. Whoever won the swim, Andy whipped on the board paddle. Whoever beat him on the board, Andy thumped on the surfski. And if he was pipped on the surfski, Andy often salvaged victory in the final beach sprint. He never gave up. His quiet, unassuming manner hid a steely will to win and he was tipped to take the crown again that year.

The surfski was easily my strongest Ironman discipline, but I was a good big-surf swimmer and my board-paddling skills were also right up there. The weakest link was my running, but fortunately for me these were short and sharp sprints, so I always found a higher gear when I needed it.

But was that enough to beat Andy?

As a teenager, he was one of my heroes, as were other Durban Surf Lifesaving Club legends, such as Lester Kitto, my father Paul Chalupsky, Tony Dumas, Tony Scott and Eric Carlson, who taught me the fundamentals of competing in the roughest surf. The debt I owe such people is unpayable. The only way to try to do so is by continuing to instil the same dreams and determination in future generations that they inspired in me.

The first stroke of luck that day was the thundering surf. I relish such conditions, using the energy of the booming ocean to give me an added edge. The next was the sequence of the three legs. These are decided by a random draw, and on that day it was to be a swim-paddle-surfski race. That’s right up my street. If I was still in contention in the final leg, I would annihilate anyone near me. Perhaps even Andy Sutherland.

But maybe that was wishful thinking. Not only was I challenging one of my heroes, also against me was the fact that the Senior Ironman took place directly after the Junior. I emerged from the surf with barely a moment to gulp down a Coke.

The beach was packed with spectators as the starting gun fired. We were off, sprinting at full throttle into the ocean. I knew that in the swim I had to push myself to the absolute limit. If I didn’t keep up, I would never regain lost time.

Despite still being tired from the Junior race, I managed to slipstream the leaders and then used every skill I had learnt in the sea to catch a fast-running monster wave and bodysurfed ashore. As a result, I was among the first ten competitors out of the water.

We sprinted up the beach and I grabbed my paddleboard, plunging back into the surf. By now I had a second wind, and again the big sea was my friend and I powered through breakers that were flipping other paddlers. As with the swim, I caught a beautifully curling set back to the beach and Andy, several other top contestants and I grabbed our surfskis at roughly the same time.

I paddled the race of my life, punching through walls of foaming water on the way out and riding a rodeo of white horses on the way in. Out of the corner of my eye I could see Andy about half a boat length behind.

All that was left was the final sprint to the posts. I expected Andy to come thundering past and dug into reserves of granite I never knew I possessed. The finishing poles were a blur as I hurtled past.

It only sunk in that I had won when Andy, one of nature’s true gentlemen, came up and congratulated me. He was obviously disappointed but was such a fine competitor and man of integrity that he was genuinely gracious about losing to a teenage upstart. His sportsmanship is something I have remembered all my life and have tried to emulate.

In surf lifesaving circles, this was tantamount to Namibia beating the Springboks in rugby. However, shocked as everyone was, the pundits pointed out that this was only a provincial event. The nationals were a couple of months away.

I would have to do it all again.

The 1979 National Surf Lifesaving champs were held in Port Elizabeth, about 900 kilometres south of Durban. I had flown in the day before, and as I walked onto the beach that morning my heart sank.

I was hoping for big surf and turbulent seas. I wanted fast-rolling sets of combers that I could catch and ride like a dolphin. Breakers that would give me an edge against superior swimmers and quicker board paddlers. Anything to keep me in contention until the surfski leg where I could blow everyone else away. Or at least, that was the theory.

In short, I desperately needed conditions as big and brawny as they had been at the Natal championships. But that was hopeful in the extreme, as unlike Durban, which directly butts into the Indian Ocean, Port Elizabeth is protected from the full wrath of open seas by the half-moon indentation of Algoa Bay. So instead of thundering rollers, the ocean was like a mirror. I could have sent a stone skimming all the way to Australia.

Which was a fitting metaphor, as that’s where the Ironman race was invented. The Aussies are among the world’s finest lifeguards and spe­cifically designed the contest to incorporate the four main disciplines of surf life­saving: swimming, board paddling, surfski paddling and running. The exact distances for each leg would vary upon current, winds and wave conditions, but they were roughly about 800 metres for the surfski, 600 metres for the board, 400 metres for the swim, and about 150 metres for each run.

However, for reasons that elude me, in South Africa we got that totally mixed up, instead measuring all water legs at about 800 metres. This resulted in making one of the world’s toughest multi-disciplined sprint races even more gruelling, as well as giving specialist swimmers a decided edge. Swimming was the most time-consuming leg, so the longer distance gave freestyle speedsters leads of a minute or more that were extremely difficult to claw back in the far quicker board and surfski time frames.

I was scheduled to compete in at least thirty contests during the two-day Nationals, but they paled into insignificance against the final race – the Senior Ironman. That’s all I was thinking about.

Despite that, I had a good day on the water, winning several events including the swimming, single- and double-surfski, and paddleboard trophies. I had also won the Junior Ironman title for the second time in a row the day before.

Then, to my delight, a few hours before the start of the Senior Ironman, the surf began picking up. The wind started gusting and the waves got bigger. Conditions I loved. Maybe, just maybe, I was in with a chance.