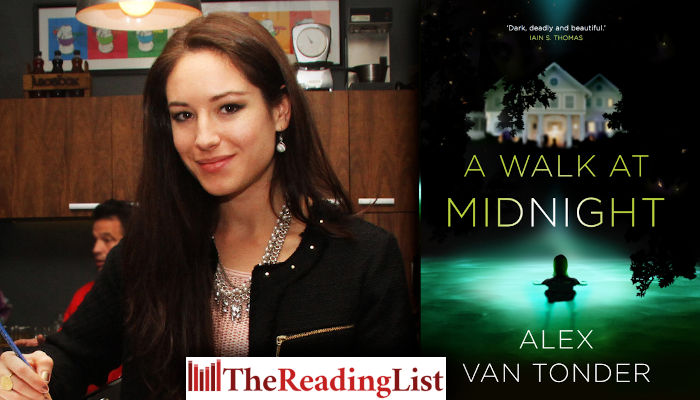 ‘This extraordinary novel is dark, deadly and beautiful. I couldn’t put it down.’ – Iain S Thomas, author of I Wrote This For You and Every Word You Cannot Say

Alex van Tonder’s new book, A Walk at Midnight, is out from Pan Macmillan SA on 2 September 2019. It’s a must read!

‘I am unleashed from my mother’s womb while she is choosing tomatoes at Ralphs. My birth is one of her favourite stories to tell.’

This is how the reader is introduced to Jane, the main protagonist in A Walk at Midnight.

Jane is a complicated character who readers will empathise with as the novel moves between past and present, revealing some very dark secrets. Secrets that daren’t be spoken of. Van Tonder’s wit, sarcasm and sharp characterisations make for compelling reading.

In this carefully crafted psychological thriller, all is not what it seems. A ‘griplit’ novel at its best, Van Tonder captures domestic suspense at its finest.

"This extraordinary novel is dark, deadly and beautiful. I couldn't put it down." – Iain S. ThomasLook out for Alex van Tonder's new book, A Walk at Midnight, coming out 2 September. It's a must-read!

Jane Ronson is the epitome of a dutiful, devoted wife and mother. She has, with grit and grace, supported her husband, Colin, through the scandals and setbacks that have dogged his career as the Governor of New York State. After years in her restrictive role as the governor’s wife, Jane achieves her own success as a writer, and is offered a publishing deal for her debut novel. This exciting news is overshadowed by Colin’s sudden death under mysterious circumstances that eerily echo events that unfold in Jane’s novel, making her the primary person of interest in the investigation.

As Jane’s and Colin’s pasts emerge in the course of the investigation, the truth becomes increasingly elusive and disturbing.

Alex van Tonder is the author of two novels, This One Time and A Walk at Midnight. She began her award-winning writing career in advertising in Cape Town, and now lives in Manhattan Beach, Los Angeles, with her husband and cat.