A story of survival – Richard Peirce investigates the sudden disappearance of great white sharks from Gansbaai in his book Orca
More about the book! 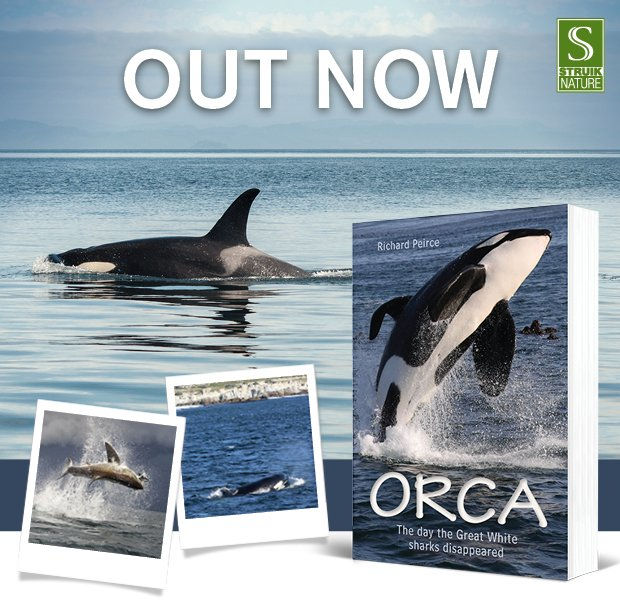 Its flourish of great whites is Gansbaai’s claim to fame, and a large part of its success, so when its shiver of sharks started to disappear, the small Western Cape town faced a conundrum. Shark conservationist and author of Orca, Richard Peirce, investigated the sudden retreat.

‘After investigation, scientists clearly linked the orcas to the shark’s disappearances.’

My book Orca is the story of several struggles for survival. The struggle when two apex predators met, and there could only be one winner, so one had to become prey and the other predator. The struggle of a small South African town when one of its main revenue sources dried up. And the challenge the scientists faced when they struggled to understand why the great white sharks had disappeared from the Dyer Island area.

For me as a storyteller, Orca was a fascinating project. I was telling the story of Gansbaai, which I had known well for over twenty years, and all the characters in the story were people I knew. We are all conditioned to think of great white sharks as the ultimate ocean predators, Jaws, the stuff of nightmares, then the narrative had to be re-evaluated when two offshore killer whales (orcas) appeared, and started predating on the great whites. Not surprisingly, the sharks fled, and this left the Western Cape town of Gansbaai in a very vulnerable position.

Since the turn of the century, shark eco-tourism had grown and grown, and for most shark fans, being in the water with a great white was the ultimate experience. Since the late 1990s Gansbaai had been building a global reputation as the ‘great white Capital of the World’, which was how the town styled itself. Then early in 2016, the ceiling crashed in on Gansbaai when their sharks disappeared. The tourists dried up, and the dream turned into a nightmare. As the months went by, it was noted that when two particular orcas arrived in the area, the sharks left. The pair were given the names Port and Starboard because one had a dorsal fin which flopped to the left (portside), and the other to the right (starboard). Dead great white carcasses started to wash up, and after investigation, scientists clearly linked the orcas to the shark’s disappearances.

The pattern became set, and those engaged in great white cage diving started to dread the arrival of Port or Starboard. Nature abhors a vacuum and Bronze Whaler sharks began turning up around Gansbaai’s cage diving boats. The ‘bronzies’ were a lifeline for the beleaguered shark tourism industry, but bronze whalers are not great white, and would never have the same iconic allure as Benchley’s famous fish.

Months became years, and the memories of Gansbaai’s assured good times faded into the past. Port and Starboard were the culprits that were initially identified as being behind the disappearance of great whites from both the Gansbaai area and False Bay, but as time passed, other factors were identified as affecting great white populations along South Africa’s coasts.

Overfishing, and particularly demersal longlining, was certainly a reason for decline in numbers. Trawling and longlining weren’t just killing great whites they were also taking large numbers of the smaller sharks, and other fish that great whites need to feed on. Port and Starboard were the first bad guys to be named and identified, but they weren’t alone in their specialist eating habits, because other offshore orcas were also recorded taking great whites and other large sharks.

Orcas have been in earth’s oceans for approximately 11 million years, and are generally accepted as being the most widespread mammal species after humans. Females live up to 100 years, and males probably around 60 years. Relative to size, they have the largest dorsal fins of any cetacean, and their intelligence is evidenced by their hunting cooperatively and changing strategies to suit circumstances.

For me, Orca was a very personal journey. I really enjoyed chronicling an area I love, as well as the experiences of many of my friends there. But in many ways, the most exciting thing about this continuing saga is that we are watching natural (or perhaps unnatural) history evolve in front of our eyes.

Orca is out now.