‘Credit is the most powerful tool for generational wealth’ – Read an excerpt from Millionaire in the Making by Laurens Boel
More about the book! 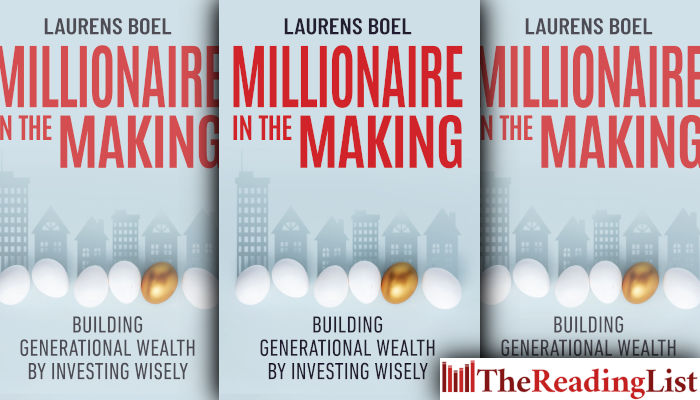 Penguin Random House has shared an excerpt from Millionaire in the Making: Building Generational Wealth by Investing Wisely by Laurens Boel.

‘I want to help those of you who feel stuck in the rat race, like I did,’ Boel says. ‘I hope to educate all South Africans on how to build a stronger financial position with multiple streams of income, while also protecting their wealth for generational success.’

Thanks to historically debilitating apartheid laws and a lack of financial education, many South Africans are crippled by generational poverty, inheriting liabilities (like black tax) instead of assets. To change society, we need to convert consumers into investors, spenders into savers, and equip our nation with world-class financial principles.

Author, educator and property expert Laurens Boel sets out every step of the wealth-generation process, including how the rich think differently from the poor, how the economy works and how to earn passive income through side hustles. He offers his own set of insider insights on how to grow and protect your wealth.

The book focuses on property investing as a foundation for wealth. The reader will be armed with secrets to investing in South Africa’s lucrative property market, such as finding below-market-value deals, leveraging other people’s money and using efficient tax structures. Plus, you’ll get advice on wealth-generation strategies like trading and starting a business.

Millionaire in the Making is a must-read for anyone looking to improve their financial situation, as well as experienced investors looking to polish their portfolios and build wealth, not only for themselves but for generations to come.

Laurens Boel has an honours degree in Computer Science from the University of Pretoria and is a director of several property companies. He advises local and international investors on property investments in South Africa. Since the publication of his first book, Financial Freedom Through Property, Boel has grown a large online following with thousands consuming his content every week. Other than property, Boel has interests in trading and online business.

Understanding South Africa’s economic machine will give you a competitive edge. Although it seems complex, it works in a simple mechanical and methodological way. An economy, defined in one sentence, is the combination of all transactions made in a given time period. A transaction can include anything where money transfers between two people or entities. If you pay someone for a service, that is a transaction and it adds to the economy. A transaction has a buyer and seller. The buyer will use money or credit to purchase goods and/or services from a seller.

One can determine the total spend by combining the cash and credit used. If you loan R250 000 from a bank and use R50 000 cash to purchase a car, the total spend is your credit plus cash, which amounts to R300 000.

A market consists of all the buyers and sellers who are making transactions around a specific product. There are markets for almost anything, such as property, wheat, steel and fruit. The economy is the sum of all the transactions within all the different markets. To grow an economy, we need to grow the number of transactions and increase spending. There is a limit to how much people can spend when using their own cash, which is why credit is so important. Credit allows people to spend money they don’t have and these transactions help grow the economy.

Credit is probably the most important and misunderstood element of the economy. When people think of credit, they associate it with bad debt and high interest rates. When used correctly, though, credit can give you the ability to buy assets by leveraging money you don’t have. Credit is the result of lenders and borrowers working together. A lender (such as a bank) aims to turn their money into more money. They do this by lending money at a certain interest rate, which is the rate at which the bank grows its money. Borrowers are people who want to leverage credit to buy things that they can’t necessarily afford with the cash they have.

The borrower receives money from the lender at an agreed interest rate. The borrower is then liable to pay off the loan within a set period. When a borrower struggles to repay their debt, the lender must recover their capital through repossession. If you borrow money to buy property and you default on the repayments, the bank will take ownership of the property and sell it to recover their capital. If you complete all your payments to the lender, your debt is repaid and you take full ownership of the property.

The SARB can influence the amount of money and transactions in an economy by changing interest rates and printing money. For instance, when the Covid-19 pandemic entered our daily lives, many South Africans tightened their spending belts. With increased uncertainty, people didn’t make as many purchases, which meant the economy started to suffer.

To entice people to spend more, the SARB lowered the repo rate, which in turn lowered the prime rate that banks charge to end-consumers. With a lower prime rate, more borrowers accessed credit to make purchases. Lower interest rates make it attractive for investors to enter the market, attain credit and thereby push money back into the economy.

Economies work in cycles. When investor confidence is high, spending increases and the economy flourishes. When confidence is low, the economy tightens. Most people dread economic lows, like the onset of Covid-19, which looked like it would be all doom and gloom. And to a large extent it was. Many people lost their jobs, spending decreased drastically, and lives were destroyed.
But! There were also opportunities among the chaos. With incredibly low interest rates and a glut of fearful or desperate sellers, the property market boomed. It was an exceptionally good time to buy property. As long as you had saved enough cash for the deposit and transaction costs, you could pick up properties at a 30 per cent discount.

With every cycle in the economy comes new opportunities. Your job, as an investor, is to wisely save your money and wait for the right opportunity to act. There is a popular saying that most millionaires are created during economic depressions, and that is because those who are patient and save wisely can take advantage of good opportunities. In the words of Warren Buffett, ‘When others are greedy, be fearful. When others are fearful, be greedy.’

Credit is the most powerful tool for generational wealth, as it allows you to buy assets that you can’t otherwise afford. To buy a property without credit (i.e. by using cash) would take most people five to ten years of diligent saving to have enough money at their disposal. But with credit, most people with a middle-income salary can loan 80 to 90 per cent of a property’s value from the bank.

As with all good things, however, there is a dark side.

We called him Jimmy even though his real name was Terrance, and he was a strange guy. He would do anything for attention, like jump off a bridge if the girl he liked was watching. I wouldn’t have called us friends, but we knew each other. We took a couple of classes together at university and he always had a good joke to tell.

After school we lost touch, but bumped into each other in Fourways five years later. Time had not been kind to Jimmy. His weather-beaten face looked defeated and his friendly smile revealed a missing tooth. It turned out that he had also invested in property early on, but he made a fatal mistake. Like many others, he jumped into lending before understanding all of its consequences.

Being the risk-taker that he was, he didn’t buy one property; he bought several. He totalled seven properties at his peak. ‘Life was good, I was riding high,’ he told me. ‘Until the market crashed.’ He obviously couldn’t afford to buy all seven properties with cash, so he had gone to the bank for loans. Given his affordability and credit score, the bank was willing to lend him money at a 100 per cent loan-to-value (LTV) ratio. This meant that the bank bought the entire property for him and all he needed to cover were the transfer and bond registration costs.

‘It was like fishing with dynamite,’ he said with an arrogant smile. ‘All I needed was about R80 000 for transfer and bond costs. I could buy a property every nine months.’ But he wasn’t aware that with a 100 per cent LTV ratio, he was on the verge of bankruptcy.

This is known as overgearing. Gearing refers to the ratio of your debt to equity, and essentially indicates your financial liquidity. Jimmy had seven properties that together were valued at around R6 million. His loan facility was R6 million. This means that his equity (the value of the properties) and his debt were equal.

This is fine as long as the interest rates stay low and the property values go up. If the interest rates spike, your debt repayments will increase, potentially putting you in a difficult position where you can no longer afford your monthly bond payments. This could force the bank to liquidate your assets until your debt is serviced. If the property values go down, as they did in Jimmy’s situation, you become overgeared.

He was riding high until he wasn’t. Over the space of a few months, the value of his properties decreased by 15 per cent owing to an oversupply of new properties and developments available to investors and buyers. The value of his debt was still R6 million, but the value of his equity had dropped to R5.1 million. This basically meant that he had more debt than equity, rendering him insolvent.

I always advise my coaching clients to purchase properties with a 70 per cent LTV ratio, instead of 90 to 100 per cent. It might be attractive to use more of the bank’s money, but it is also risky if the market moves downward. We’ve seen how quickly a market can drop during Covid-19. In the midst of the nationwide panic, many people put their houses on the market. The flood of sellers and withdrawal of buyers led to a drastic fall in property values. Some estimates included a 30 per cent decrease in property values during the initial stages of the national lockdown.

Jimmy’s desperate smile and twitching left eye made a lot more sense once I’d heard his story. He hadn’t aged because of the weather but because of stress. The pressure of losing all seven properties and still owing R900 000 was too much for even this daredevil to bear. Credit and debt are powerful levers you can use to build wealth long into the future, but if mismanaged or used incorrectly, they can spiral you down into generational poverty.