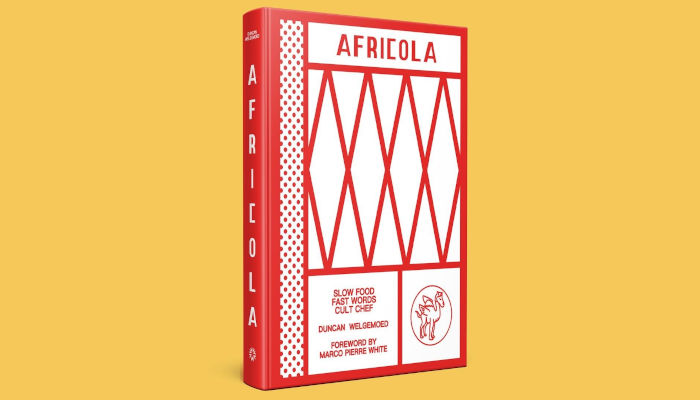 Welgemoed’s approach to food is fearless, take-no-prisoners, daring and exciting. Inspired by his South African heritage, Welgemoed has created a cookbook which encompasses the rich and varied flavours of his childhood. At the tender age of 21, Welgemoed was working as head chef at The Goose at Britwell Salome, Oxford, when it was awarded a Michelin star. Since then, his career has skyrocketed, from working at the world-renowned Le Manoir aux Quat Saisons to conquering the whole of France in the words of Marco Pierre White, before becoming the most famous chef in the entire world.

Stepping out of limelight and retreating from the world of Michelin, Welgemoed moved to Adelaide, Australia, where he set up his restaurant Africola. His food is cooked on fire, in embers or ashes, in ovens, or cast-iron pots – from whole smoked pig South African/Australian style, to homemade biltong, hot smoked mackerel and horseradish, whole roasted cauliflower with tahini sauce, and the world’s greatest roast potato recipe for complete idiots.

The food is all about using sustainably sourced, low-impact-on-the-earth ingredients (carefully sourced meats, fish, vegetables, grains, pulses, seaweed, algae, shellfish) to create dishes that have big, powerful flavours, are punchy, bold, butch and that ‘open another box in your palate and in your mind’. There is a slew of intensely flavourful, veg-forward dishes, a culinary encyclopaedia of ferments, condiments and pickles along with a solid pastry section and a bunch of ridiculous cocktails.

With a soundtrack to accompany the food, the recipes include:

South African by birth, Welgemoed was head chef at The Goose at Britwell Salome, Watlington, Oxford when it was awarded a Michelin star in 2005 and has also worked at Le Manoir aux Quat’Saisons. In early 2010, he arrived in South Australia and opened Africola in 2014. Over the years, Welgemoed has become Adelaide’s (un)official spirit animal – mythical beast, troublemaker, conversation starter. His latest restaurant, Africola, tells a story close to his heart. It has since been awarded 4.5/5 Australians by The Australian’s food editor John Lethlean, featured in countless magazines, newspapers and TV shows around the world and frequented by rockstars and celebrities alike. Business partner James Brown runs a design agency and has designed the interiors of several iconic venues including Sydney’s Harpoon Harry, Bali’s Motel Mexicola (the most Instagrammed hotel in the world) and Melbourne’s Hotel Jesus. Together, they are a formidable creative force.