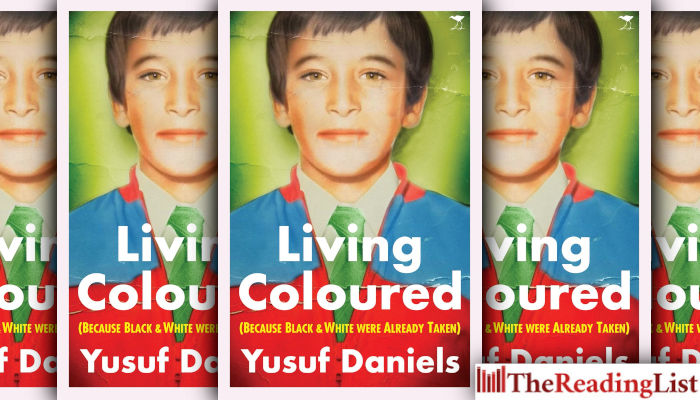 Living Coloured (Because Black & White Were Already Taken) by Yusuf Daniels is a special kind of memoir that utilises short stories to weave together both a culturally insightful and an achingly nostalgic glimpse into a childhood on the Cape Flats.

From the nightclubbing at Space Odyssey and the shenanigans at the Mitchells Plain public swimming pool, to the traditions of delectable food exchanges during Ramadan between Muslims and Christians alike, this book truly is a tribute to all that large parts of the Coloured community holds dear and sings of the spirit which helped them seek out an existence on the dusty flat plains of the Cape.

Daniels’s stories were birthed as Facebook updates that garnered large reactions from his friends, who encouraged him to write more, and now we have this delightful collection of memories that is an ode to an era many Cape Coloured people will instantly recognise, and elicit rip-roaring laughter.

In many ways the subtext of the book confronts the reader with the injustices and blatant racism of the Group Areas Act, which placed large populations in small areas that fast became strained for resources. The lack of resources inevitably led to areas such as the Cape Flats experiencing a scourge of crime and violence that lingers today.

Daniels aptly illuminates a childhood and culture that is coloured by tender, joyful moments and bright mischievous teenage jaunts against the backdrop of a gloomy political and economic era in South Africa’s history.

With Living Coloured (Because Black & White Were Already Taken), the author shows that even under severe realities, people continue to live despite the odds not being in their favour – that they make it out alive.

Yusuf Daniels grew up in what some still refer to as the Cape Flats ghettos. One of four children, he was born in Bridgetown and later moved with his family to Mitchells Plain on the Cape Flats. His family, like thousands of other families, carved out an existence in a closeknit Coloured community that still today eat, laugh and pray together, despite the hardships of South Africa’s horrific political, economic and social past. He is currently a property auctioneer and a father of three.