Read an excerpt from John Boyne’s new novel All The Broken Places – a moving story about grief, guilt and complicity 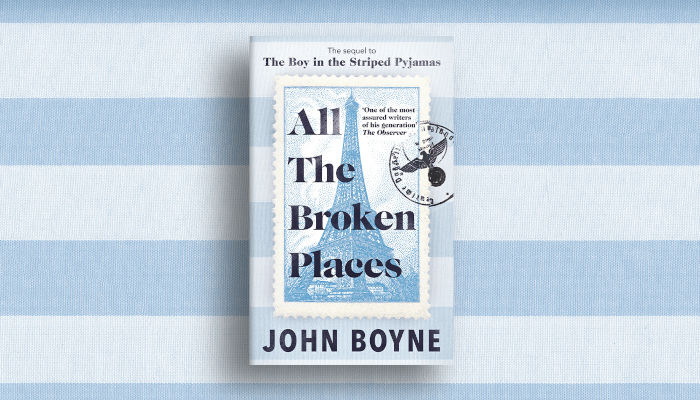 Penguin Random House has shared an excerpt from All the Broken Places by John Boyne.

All The Broken Places is the sequel to the globally bestselling, multi-million-copy classic The Boy in the Striped Pyjamas.

It is a devastating, beautiful story about a woman who must confront the sins of her own terrible past, and a present in which it is never too late for bravery.

Then, a young family moves into the apartment below her. In spite of herself, Gretel can’t help but begin a friendship with the little boy, Henry, though his presence brings back memories she would rather forget. One night, she witnesses a violent argument between Henry’s mother and his domineering father, one that threatens Gretel’s hard-won, self-contained existence.

Gretel is faced with a chance to expiate her guilt, grief and remorse and act to save a young boy – for the second time in her life. But to do so, she will be forced to reveal her true identity to the world. Will she make a different choice this time, whatever the cost to herself?

1
If every man is guilty of all the good he did not do, as Voltaire suggested, then I have spent a lifetime convincing myself that I am innocent of all the bad. It has been a convenient way to endure decades of self-imposed exile from the past, to see myself as a victim of historical amnesia, acquitted from complicity, and exonerated from blame.

My final story begins and ends, however, with something as trivial as a box cutter. Mine had broken a few days earlier and, finding it a useful tool to keep in a kitchen drawer, I paid a visit to my local hardware shop to purchase a new one. Upon my return, a letter was waiting for me from an estate agent, a similar one delivered to every resident of Winterville Court, politely informing each of us that the flat below my own was being put up for sale. The previous occupant, Mr Richardson, had lived in Flat One for some thirty years but died shortly before Christmas, leaving the dwelling empty. His daughter, a speech therapist, resided in New York and, to the best of my knowledge, had no plans to return to London, so I had made my peace with the fact that it would not be long before I was forced to interact with a stranger in the lobby, perhaps even having to feign an interest in his or her life or be required to divulge small details about my own.

Mr Richardson and I had enjoyed the perfect neighbourly relationship in that we had not exchanged a single word since 2008. In the early years of his residence, we’d been on good terms and he had occasionally come upstairs for a game of chess with my late husband, Edgar, but somehow, he and I had never moved past the formalities. He always addressed me as ‘Mrs Fernsby’ while I referred to him as ‘Mr Richardson’. The last time I set foot in his flat had been four months after Edgar’s death, when he invited me for supper and, having accepted the invitation, I found myself on the receiving end of an amorous advance, which I declined. He took the rejection badly and we became as near to strangers as two people who coexist within a single building can be.

My Mayfair residence is listed as a flat but that is a little like describing Windsor Castle as the Queen’s weekend bolt hole. Each apartment in our building– there are five in total, one on the ground floor, then two on both floors above– is spread across fifteen hundred square feet of prime London real estate, each with three bedrooms, two and a half bathrooms, and views over Hyde Park that value them, I am reliably informed, at somewhere between £2 million and £3 million pounds apiece. Edgar came into a substantial amount of money a few years after we married, an unexpected bequest from a spinster aunt, and while he would have preferred to move to a more peaceful area outside Central London, I had done some research of my own and was determined not only to live in Mayfair but to reside in this particular building, should it ever prove possible. Financially, this had seemed unlikely but then, one day, like a deus ex machina, Aunt Belinda passed away and everything changed. I’d always planned on explaining to Edgar the reason why I was so desperate to live here, but somehow never did, and I rather regret that now.

My husband was very fond of children but I agreed only to one, giving birth to our son, Caden, in 1961. In recent years, as the property has increased in value, Caden has encouraged me to sell and purchase something smaller in a less expensive part of town, but I suspect this is because he worries that I might live to be a hundred and he is keen to receive a portion of his inheritance while he is still young enough to enjoy it. He is thrice married and now engaged for a fourth time; I have given up on acquainting myself with the women in his life. I find that as soon as one gets to know them, they are despatched, a new model is installed, and one has to take the time to learn their idiosyncrasies, as one might with a new washing machine or television set. As a child, he treated his friends with similar ruthlessness. We speak regularly on the telephone, and he visits me for supper every two weeks, but we have a complicated relationship, damaged in part by my year-long absence from his life when he was nine years old. The truth is, I am simply not comfortable around children and I find small boys particularly difficult.

My concern about my new neighbour was not that he or she might cause unnecessary noise– these flats are very well insulated and, even with a few weak spots here and there, I had grown accustomed over the years to the various peculiar sounds that rose up through Mr Richardson’s ceiling– but I resented the fact that my ordered world might be upset. I hoped for someone who had no interest in knowing anything about the woman who lived above them. An elderly invalid, perhaps, who rarely left the house and was visited each morning by a home-help. A young professional who disappeared on Friday afternoons to her weekend home and returned late on Sundays, spending the rest of her time at the office or the gym. A rumour spread through the building that a well-known pop musician whose career had peaked in the 1980s had looked at it as a potential retirement home but, happily, nothing came of that.

My curtains twitched whenever the estate agent pulled up outside, escorting a client in to inspect the flat, and I made notes about each potential neighbour. There was a very promising husband and wife in their early seventies, softly spoken, who held each other’s hands and asked whether pets were permitted in the building– I was listening on the stairwell– and seemed disappointed when told they were not. A homosexual couple in their thirties who, judging by the distressed condition of their clothing and their general unkempt air, must have been fabulously wealthy, but who declared that the ‘space’ was probably a little small for them and they couldn’t relate to its ‘narrative’. A young woman with plain features who gave no clue as to her intentions, other than to remark that someone named Steven would adore the high ceilings. Naturally, I hoped for the gays– they make good neighbours and there’s little chance of them procreating– but they proved to be the least interested.

And then, after a few weeks, the estate agent no longer brought anyone to visit, the listing vanished from the Internet and I guessed that a deal had been struck. Whether I liked it or not, I would one day wake to find a removals van parked outside and someone, or a collection of someones, inserting a key into the front door and taking up residence beneath me. Oh, how I dreaded it!