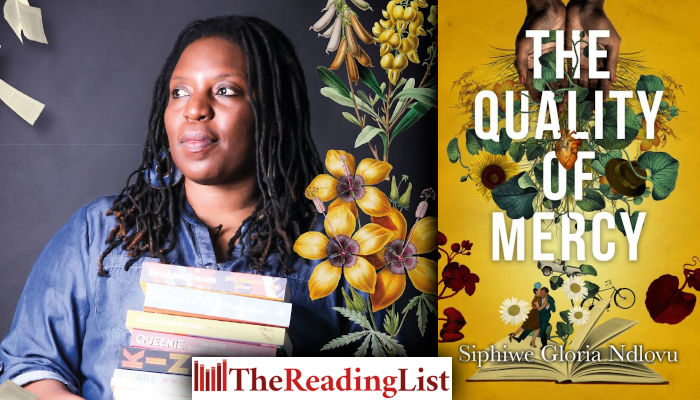 Siphiwe Gloria Ndlovu’s debut novel turned out to be the first in a trilogy. Not that she planned it that way. But now, she’s just written the last, The Quality of Mercy.

The Quality of Mercy, your new book, is also the last in the City of Kings trilogy, but, you didn’t set out to write a trilogy, did you?
I think if I had set out to write a trilogy, I would have found the prospect too daunting. When I started writing The Theory of Flight, I was also playing around with other story ideas. I wasn’t aware that I was writing interconnected works until I was well into the novel and all of a sudden one of the characters from another story idea made an appearance. When I started writing The History of Man, I had to accept that I was working on a series of interconnected stories. The History of Man deals with the colonial state and The Theory of Flight deals with the postcolonial state, so by the time I started writing The Quality of Mercy, I thought it would be interesting to examine what exactly is inherited when a state transitions from being one that is colonial to being one that is postcolonial. Therefore, The Quality of Mercy actually acts as a bridge between the first two novels.

How did you choose the first names of Spokes Moloi and his wife, Loveness?
Zimbabweans are known for being rather, let’s say, ‘creative’ with names. This is a characteristic I quite like about my country. I wanted this aspect of name-giving to be very present in the novel through not only Spokes and his wife, the lovely Loveness, but many other characters as well. A name carries so much and (whether we like it or not) it can help shape a person’s identity; because of this, names are extremely powerful.

You are also a filmmaker – do you write with that medium in mind?
I do like the visual language of film; how the medium forces you to translate what you see in your mind’s eye onto the page so that others can see it as well. Although film is a visual medium, images usually have to be turned into words in order to be turned into images once again. This process of what I would call ‘image translation’ is definitely how I write. Words and images are equally important to me in my writing process.

Spokes investigates the murder of coloniser Emil Coetzee, the protagonist in The History of Man. How does mercy come into play?
I cannot think of how to answer this question without giving too much of the plot away, so I will say that it is up to the reader to decide how mercy plays a role in the novel. However, what I love about the word ‘mercy’ is that it is both loaded and slippery as a term – it is not just about forgiveness and kindness and compassion, it is about the ability and the capacity and the willingness and the power to do the act; it is an extremely layered word.

The Quality of Mercy is out now.

This is indeed a story of mercy – and the redemption it offers. On the eve of his retirement, Spokes Moloi, a police officer of spotless integrity, investigates one final crime: the possible murder of Emil Coetzee, head of the sinister Organisation of Domestic Affairs, who disappears on the same day a ceasefire is declared and the country’s independence beckons. In following the tangled threads of Coetzee’s life, Spokes raises and resolves conundrums that have haunted him, and his country, for decades under colonial rule. In all this, he is staunchly supported by his paragon spouse, Loveness, and his unofficially adopted daughter, the unorthodox postman Dikeledi.

In her most magnificent novel yet, award-winning author Siphiwe Gloria Ndlovu showcases the history of a country transitioning from a colonial to a postcolonial state with a deft touch and a compassionate eye for poignant detail. Linked to The Theory of Flight and The History of Man, Ndlovu’s novel nevertheless stands alone in its evocation of life in the City of Kings and surrounding villages. Dickensian in its scope, with the proverbial bustling cast of colleagues both good and bad, villagers, guerrillas, neighbours, ex-soldiers, suburban madams, shopkeepers, would-be politicians and more, The Quality of Mercy proposes that ties of kinship and affiliation can never be completely broken – and that love can heal even the most grievous of wounds.