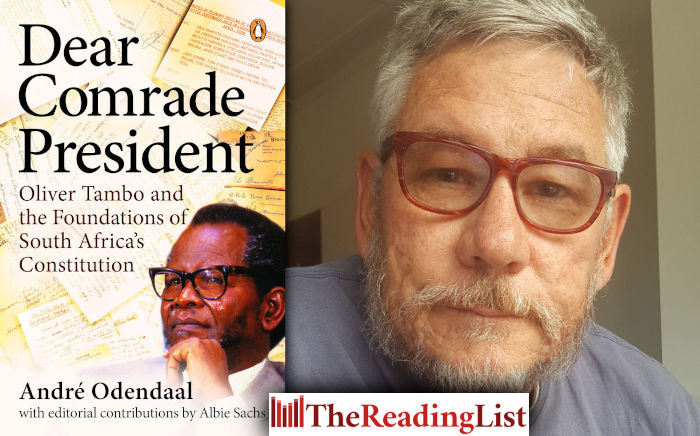 Dear Comrade President: Oliver Tambo and the Foundations of South Africa’s Constitution by André Odendaal is out now from Penguin Random House!

In his annual presidential address on 8 January 1986, ANC president Oliver Tambo called on South Africans to make apartheid ungovernable through militant action. But unknown to the world, the quiet-spoken mathematics teacher and aspirant priest turned reluctant revolutionary had also on that very day set up a secret think tank in Lusaka, which he named the Constitution Committee, giving it an ‘ad hoc unique exercise’ that had ‘no precedent in the history of the movement’.

Knowing that all wars end at a negotiating table, and judging the balance of forces to be moving in favour of the liberation movement, he wanted the ANC to be prepared and to be holding the initiative after the political collapse of apartheid. Guided by a brilliant analysis by Pallo Jordan, Tambo instructed his new think tank to prepare a constitutional framework for a liberated, non-racial, democratic South Africa. Their task was to formulate the principles and draft the outlines of a constitution that could unite South Africa when the time came to talk in the fledgling days of freedom and democracy.

The seven-member team, including Albie Sachs, Kader Asmal and Zola Skweyiya, started deliberating and reporting to Tambo. In correspondence, they typically addressed him as ‘Dear Comrade President’.

Drawing on the personal archives of participants, Dear Comrade President explains how this process, which fundamentally influenced the history of contemporary South Africa, unfolded. Why and how did it happen? What were the first written words? When and where were they put on paper? By whom? What values did they espouse? And how did the committee’s work fit into the broader struggle?

Dear Comrade President answers these questions in ways that have not been done before and provides paradigm-changing insights into the purposeful first steps taken in the making of South Africa’s Constitution.

André Odendaal is writer in residence and honorary professor in History and Heritage Studies at the University of the Western Cape. His dozen books include The Founders: The Origins of the African National Congress and the Struggle for Democracy (2012); Pitch Battles: Sport, Racism and Resistance (2020), co-authored with Peter Hain; and the jointly edited Robben Island Rainbow Dreams (2021) on the making of democratic South Africa’s first heritage institution.