‘You are the commanderess-in-chief of your own sexual revolution!’ Read an excerpt from Becoming Iman by Iman Rappetti
More about the book! 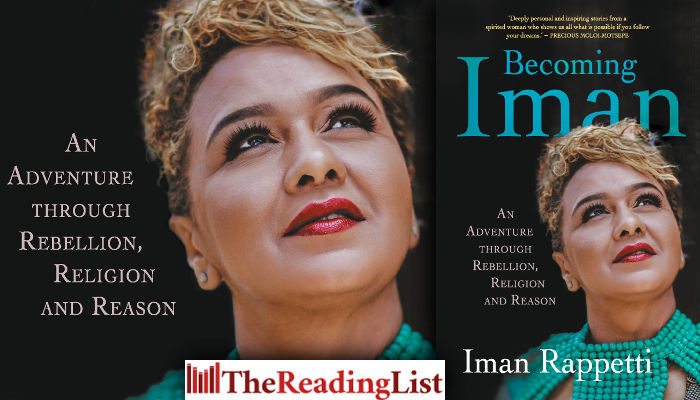 Iman Rappetti’s memoir Becoming Iman is moving and entertaining, told with searing honesty and engaging humour, and as inspirational and charismatic as the author herself.

When I met the Mr to whom I would become Mrs, I had largely carried the fear of God and plagues in respect of sexual dalliances. Of course there was the understandable dabbling in discovery and lightly dodging the licking tongues of hellfire so I was untouched (in the biblical sense) when I finally let my ex-husband cross the frontier. He was the only one. The anointed.

So when the complex of our union was torn down and demolished, leaving behind only smouldering heaps of recrimination and destruction, I found myself in the hinterland of fear and inexperience where these matters were concerned. When things fell apart, my sense of self and my confidence lay in the rubble among so many other things. I had to start with what was the most damaged, my self-esteem and my attractiveness as a woman. I had always been confident and sure of myself but I realised that actually I wasn’t anymore.

But I’m not one to sit in a heap and ossify slowly. Especially if the invitations to the big pity party say ‘ADMIT ONE ONLY’. Where’s the fun in being miserable alone? My misery had to become something else and it soon morphed into militancy. C’mon girl! Take charge! You are the commanderess-in-chief of your own sexual revolution! You keep it all together for a man and then it’s all for nothing. Hell no! Find that backbone, get out your gear, it’s time to go to war! More importantly though, I had been coming round to the realisation anyway that the whole ‘All-hail-to-the-hymen, marriage-is-a-covenant’ bullshit was just another way to define a woman’s self-worth by things that she did not always have supreme and singular control of. And it also seemed like a pretty backward value system. But there was a negative side to this Amandla state of being that was reactionary and not as thoughtful, as I would later discover.