Spoilt Ballots – lifting the lid on 200 years of electoral dysfunction in our beloved and benighted nation
More about the book! 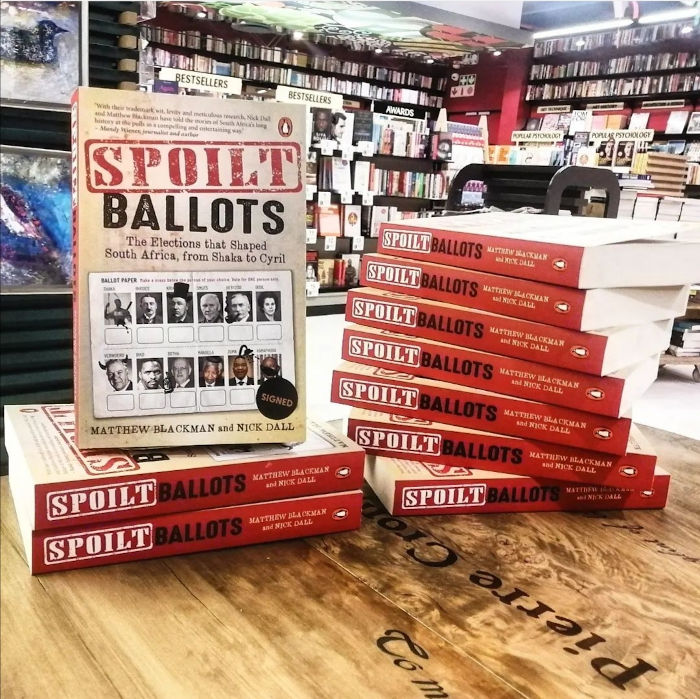 ‘All those who want to understand the country’s trajectory over the long run of history will enjoy this lively and well-written text.’ – Roger Southall, Wits University

‘With their trademark wit, levity and meticulous research, Nick Dall and Matthew Blackman have told the stories of South Africa’s long history at the polls in a compelling and entertaining way, bringing narratives to life through the protagonists and the juicy sideshows.’ – Mandy Wiener, journalist and author

If you paid even a moment’s attention during high school history lessons, you probably know that 1910 brought about the Union of South Africa, that the 1948 general election ushered in apartheid, and that the Rainbow Nation was born when Madiba triumphed in the country’s first democratic elections in 1994.

Spoilt Ballots dishes the dirt on these pivotal events in our history. But it also sheds light on a dozen lesser-known contests, starting with the assassination of King Shaka in 1828 and ending with the anointing of President Cyril at Nasrec in 2017.

Spoilt Ballots is as much about the people who voted in some of our most decisive elections as it is about those who didn’t get to make their mark. It explains why a black man in the Cape had more political rights in 1854 than at any other point in the ensuing 140 years and how the enfranchisement of women in 1930 was actually a step back for democracy.

The book will leave you wondering if Oom Paul Kruger’s seriously dicey win in the 1893 ZAR election might have paved the way for the Boer War and whether ‘Slim Jannie’ Smuts really was that slim after all. It shows how the Nats managed to get millions of English-speakers to vote for apartheid and why the Groot Krokodil’s attempt to co-opt coloureds and Indians into the system backfired spectacularly.

Entertaining and impeccably researched, Spoilt Ballots lifts the lid on 200 years of electoral dysfunction in our beloved and benighted nation.