Infiltrate. Trust no one. Kill – or be killed. Deep State by Chris Hauty
More about the book! 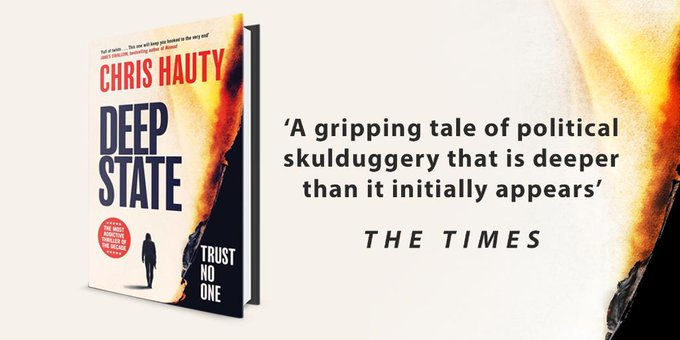 In this white-knuckled, timely, and whip-smart debut thriller, a deadly plot against the president’s life emerges from the shadows of the Deep State.

‘One of the more surprising double-reverse plot twists … in some time.’ – The New York Times

Recently elected President Richard Monroe – populist, controversial, and divisive – is at the centre of an increasingly polarised Washington, DC. Never has the partisan drama been so tense or the paranoia so rampant.

In the midst of contentious political turf wars, the White House chief of staff is found dead in his house. A tenacious intern discovers a single, ominous clue that suggests he died from something other than natural causes, and that a wide-ranging conspiracy is running beneath the surface of everyday events: powerful government figures are scheming to undermine the rule of law – and democracy itself.

Allies are exposed as enemies, once-dependable authorities fall under suspicion, and no one seems to be who they say they are.

The unthinkable is happening. The Deep State is real. Who will die to keep its secrets and who will kill to uncover the truth?

Deep State by Chris Hauty is out now from Jonathan Ball Publishers!