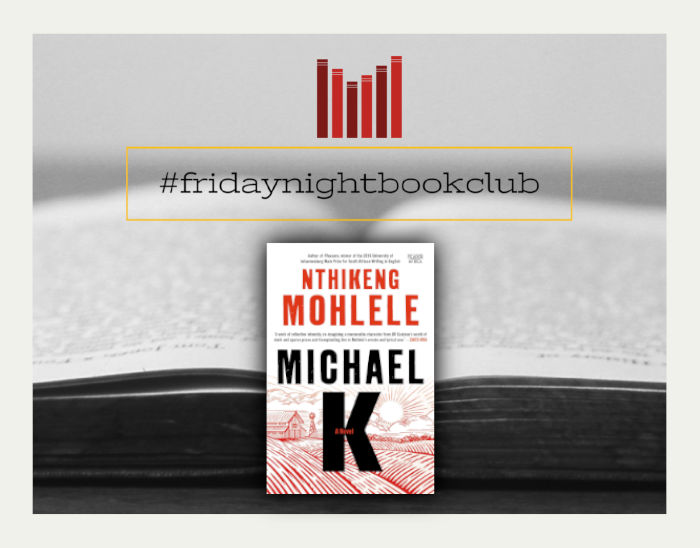 Stay in and get cosy with a glass of wine and this extended excerpt from Nthikeng Mohlele’s new book, Michael K.

How is it that a character from literary fiction can so alter the landscapes he touches, even as he – in his self-imposed isolation – seeks to avoid them? How is it that Michael K, bewildered and bewildering, can remain so fragile yet so present, so imposing without attempting to be so? In this response to JM Coetzee’s classic masterpiece Life and Times of Michael K, Nthikeng Mohlele dabbles in the artistic and speculative in a unique attempt to unpack the dazed and disconnected world of the title character, his solitary ways, his inventiveness, but also to show how astutely Michael K holds up a mirror to those whose paths he inadvertently crosses. Michael K explores the weight of history and of conscience, thus wrestling the character from the confines of literary creation to the frontiers of artistic timelessness.

A man I have known all my life, all fifty-three years, one I have loved, admired and revered, a man of impeccable manners and good humour, Maurice M, my father, walked into my study around 6 pm, handed me a loaded Smith & Wesson and implored me to shoot him in the head. What does one say to such a request, so sudden and final? I had, until that moment, never held a gun in my hand, the cold and ruthless instrument designed for the sole purpose of populating cemeteries. It was the manner of the request, like nothing ever existed before it, nothing after: just that permanent, forceful, draining imposition. That was a year ago, but does not mean I have not been permanently disfigured by the memory. I woke up in hospital that evening, plugged into beeping machines. Alcohol poisoning.

Shoot me in the head: a polite and whispered request for the bloodying of hands, the splattering of walls. People are of course entitled to request anything they please, even daunting things, things that impose shock and bewilderment in those asked. It was not so much that Father made the ultimate request – perhaps the greatest test of love and loyalty, of empathy – but rather that a part of me was so tempted, even half reconciled, to pick up the pistol, aim, close my eyes and pull the trigger.

Euthanasia? No, it would not have been that. Maybe an expression of frustration, of despair, of helplessness in witnessing the indignities suffered by my father. It was, for a man of his stature, reputation, a man of his resolve, heartrending to witness his lapses in composure, his embarrassing excesses, his oblivious submission to a decaying body. I nursed him, stroked his back, reassured him of my love and what remained of his imploding dignity. Disease does that to you: strips you of composure, robs you of hope, renders everything urgent but impossible. You know and are reminded of lurking death: doctors tell you that; shocked faces of friends confirm it, and yet there is nothing to be done to change anything. The intermittent outbursts of violence, the insults and rages, the trouser-wetting and tearful meltdowns. The refrain from doctors and relatives was the same: he is not himself. For safety and practical reasons, I had, because of a blue eye he gave me during one of his sudden rages before he was wheelchair-bound, when he could still walk, resorted to securing him on a dog leash, walking him like a hound. I guess I had simply grown tired of him getting lost, of reporting him missing, searching for weeks, assuming him dead, only for him to resurface in some obscure hospital, sceptical and morose.

My father was a good-looking man, handsome almost; educated, deeply religious, and an ardent admirer of both John F Kennedy and Lyndon B Johnson – a glaring contradiction, I know. He was not into what he called ‘home politics’, and spent considerable time reading about the Bay of Pigs, piles of political biographies, from Mandela to Sergeyevich Khrushchev. Churchill too. Winston, he famously said once, was the most emotive and passionate of politicians, living or dead. So I grew up listening to countless recordings of historic addresses played from morning till mid-afternoon, paused at mealtimes, during which my father would recite Kennedy’s Ich bin ein Berliner with pride and gusto.

There was very rarely music in our house, just political speeches in various guises: UN meetings, presidential addresses, famous remarks to the press by Henry Kissinger, arguments and counter- arguments from high-profile political court cases and Commissions of Inquiry. We knew without being told who it was who said, ‘Lass’ sie nach Berlin kommen’, though we had no idea what a Boston accent was. We kept the company of Gandhi and Castro, swam to the majestic speeches of Dr King lamenting the age of war and the rise of machines, to Patrice Lumumba opining about liberty and prosperity.

Mother, who was Wits University’s most accomplished historian, would mock my father behind his back, sneer at his favourite utterances, including one we found hilarious, when he would assume presidential posture and gestures, saying: ‘General Secretary Gorbachev, if you seek peace, if you seek prosperity for the Soviet Union and Eastern Europe, if you seek liberalization, come here to this gate. Mr Gorbachev, open this gate. Mr Gorbachev, tear down this wall!’ Mother said the man Father tried to impersonate was Ronald Reagan, an American president whose reputation – good or bad? – historians and economists can’t agree on. She said the speech had been made at the Brandenburg Gate in West Berlin on June 12 of 1987. I did not know what the Brandenburg Gate was, or where it could be found.

From that old Blaupunkt stereo the world’s leaders, living and dead, spoke: threatened, reassured, warned, cautioned, despaired, triumphed and surrendered, made estimations and commitments to fortitude, mapped and hid affairs of state in their glory and gore. I warmed to the gifts of oratory, to mundane and moving speeches that made my ceremonial father reserved and emotional, affairs of state that sounded powerful but had little or no meaning. Churchill was Churchill, Kennedy Kennedy, but I was hard-pressed to understand why they never tired of talking, why – according to Mother – they wanted different things, that it was important for the world to know what they thought, what they stood for, that for which they were prepared to die: presidents, prime ministers, envoys, names and voices my ceremonial father knew and Mother mastered, events my ceremonial father touched on but which Mother knew backwards, famous utterances my ceremonial father misinterpreted but Mother comprehended. There were glaring distinctions to be made between my ceremonial father with presidential ambitions and Mother, the highly decorated historian. The historian knew the speeches, the meetings and arguments that led to the speeches, the key players who dictated matters from the shadows, from the blind spots of history. She knew the quips, the miscalculations, the secret ambitions of deceased speechwriters, politicians and their mistresses, the unintended outcomes of unpredictable happenings. Mother humanised history. Hers was not just citations of people and dates, of documents and archives, obscure references to periods and places, but flesh-and-blood individuals who steered events, said important and puzzling things that culminated in broadcasts from my ceremonial father’s stereo. Mother was of course interested in the fact that Abe Lincoln abolished slavery, but was equally fascinated by and invested in the fact that he was a manic depressive, that he was never once photographed alongside his wife, that he wore size-fourteen shoes. History, said Mother, is written by men and women of conscience, not by historians and television cameras. The purest history, cautioned Mother, existed in the hearts of those touched by words and events rather than in newspapers and libraries. That even at its vaguest, its most contradictory, its most impassioned, history suffered a multitude of fatalities: its wrestling with the present, its defencelessness against fading memory, its uneasiness when faced with scrutiny.

But, while Mother was a pragmatic idealist with a bent for rationale, Father was a romantic, albeit a cautious one, one who shunned pragmatism for philosophy, theory for action. He shunned convention, shrugged off society’s rules as often he did his clothes. He was, as nudists go, not one of the brightest or most imaginative. He was certainly no Larry Flynt, not one of those supple young men photographed nude in horse stables or cow sheds, muscular men dipped in glistening oil with a rose between their teeth. Father was not that kind; never was. He was, at seventy-three, not what you would call stable either, even though I knew other seventy-three-year-olds with a full command of their senses. Dementia is a merciless thing, I tell you, and combined with grief, it reduced my father to a shirtless or trouserless wanderer around the house: bending, squatting, or stretching his aged self in search of unknowable things. There was nothing worse than being confronted by one’s nude father at the breakfast table, who unaware of his state of undress still issued instructions: ‘No one in this house must ever come to the breakfast table without taking a bath. Family tradition,’ and could, when not a soul stirred, continue unfazed.

What time is it anyway?

Where is your mother?

Mom is deceased, Papa, remember? I would answer.

When? He would ask, wide-eyed and startled.

An overgrown ovarian cyst that ruptured, Papa, I would explain again. I told and reminded you of this seven hundred times already. Okay, the latter I wouldn’t say out loud.

He would tear up: Oh.

It was difficult to tell where the dementia started and ended, when his head injury from a vehicle accident took over, when grief insisted on being present. Sad, because Father had been one of the happiest people I have ever known.

I live a colourful life. Even for a bachelor. Well, almost. I am not someone you would consider important, not readily noticeable, am coy and somewhat reclusive. I don’t think of myself as shy, yet am often misread as such. My soul bleeds, though, pruned by zealots and charlatans with blunt tools, butchered by souls with stale breath and unkempt nails, slashing with questionable sobriety while agitated, in a hurry to fondle their lovers. I am, as specimens of madmen go, educated, urbane, some morals cast in concrete. I suffer certain addictions: coffee and carrot cake for sure, but also petite women with bed-warming tendencies. I adore rain, am friendly to pets – but only of the hygienic kind – and loathe chewing gum and public toilets. I am aware of my ripening madness, the dashes of rarer and profounder contortions of lunacy imposed on me by the grand madness of our age. It must be pointed out, however, that mine is not a madness of the mind, but a volatility of a fragile heart, a heart that has never learnt the raw power of seductions of the conventional kind.