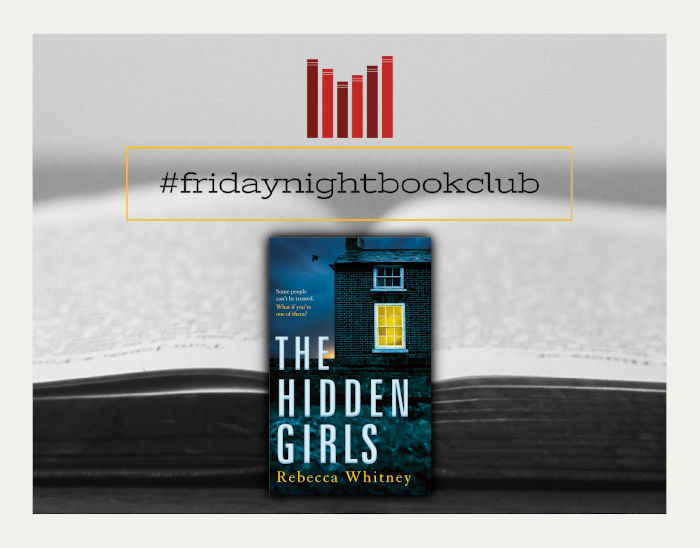 Treat yourself to a glass of wine this evening with this excerpt from The Hidden Girls by Rebecca Whitney – a novel that explores the dark and isolating side of motherhood.

How does the saying go? Just because you’re paranoid, it doesn’t mean they’re not out to get you …

For Ruth, a new mother recovering from postpartum psychosis, every day is difficult and, after months spent hearing voices in the walls and trusting no one, she’s no longer confident in her own judgement. Neither, it seems, is anyone else.

So, when she hears a scream from the local petrol station one night, she initially decides it must be her mind playing tricks again. The police, too, are polite but firm: she must stop calling them every time she thinks she hears something. And her husband is frustrated; he’d hoped Ruth was getting better at last.

Ruth can’t quite let it go … What if there was a scream? What if it was someone in trouble? Someone who needs Ruth’s help?

A scream splits the 3 a.m. silence, two long bursts, high and wild. A woman’s scream. Even as Ruth listens, propped up in bed on soggy pillows with her colicky six-month-old sucking the last from a bottle, she doubts the scream exists; it’s just her sleep-starved brain tossing out fantasy again. But she’ll have to call the police, if only to confirm the noise is her imagination.

She lays Bess next to Giles in the bed and takes the phone into the next room. Her little girl mustn’t wake, and Ruth hasn’t the energy for Giles’s judgement.

‘Where did you say the noise came from?’ the controller asks, after Ruth tells her what she heard.

Ruth’s eyes turn to the ceiling as she recalls the daytime noises that carry to her house: the intercity trains speeding past allotments at the back, a constant rumble of traffic on the North Circular, men’s voices who work the car wash at the end of her street.

‘From the petrol station,’ she says.

‘Was it from inside the building?’

‘I’m not sure. It’s not a petrol station any more, it’s a car wash during the day now. But the noise came from thereabouts. I mean, I think I heard something. Has anyone else reported a disturbance?’

Details are taken, the call ends, and Ruth returns to her bedroom to wait at the window with the curtains open. The old gym T-shirt she now uses as a nightie trembles with her fluttering pulse, the sensation in her chest similar to the butterfly of her baby’s first movements, only it’s travelled up to her heart, as if she’s pregnant with anxiety. Ruth will cry if she gives the feeling much attention, so she pushes her face against the cold glass to concentrate on outside. In the netherworld of the night the minutes warp and flatten until eventually a blue light blinks on the tarmac – a premonition of the response car that follows. The vehicle cruises into view, and from inside the car, officers shine their torches over the hedgerow that lines the opposite side of the street. Ruth imagines the policemen or women cursing and their tired eyes blinking as they follow up another of her calls. The car passes out of sight, then the noise of the engine turns into the dead end at the top of the road where the terrace numbers reach the early hundreds, before the vehicle glides back past her house, leaving behind a silence somehow emptier than before.

She waits for a few minutes to see if the police return. They don’t. She shuffles into the small space left over in the bed where Bess fidgets between her mum and dad, the little girl in a feathery sleep. If Ruth moves her to her cot, she’s bound to wake, so it’s better to lie in discomfort than have her baby cry any more. The clock shunts on in slow minutes. Ruth palpates with exhaustion, yearning for the old habit of sleep, but her off-button’s been taken away and she’s being forced to watch the static. In less than three hours it will be time to get up again.

Eventually Ruth’s breathing slows and a small dream settles – a circle of trees swinging in a dark wind, a figure running through the undergrowth, just out of Ruth’s reach as she chases behind – only to be disturbed again by another scream. This time Ruth doesn’t react. The police have confirmed the noise is simply her brain malfunctioning, another aftershock from the illness she suffered since giving birth. Now she’s certain of her uncertainty, she feels a small camaraderie with this auditory hallucination, or paracusia as she’s learnt it’s called. Nothing else exists in this witching hour except for Ruth, her baby and the scream; all other members of the sane world are dreaming of sex or sorrow, or yesterday’s faux pas. Ruth wonders what would happen if all the forests caught fire, smoke and ash blanketing the sun, and this darkness remained. Nothing would grow. Supplies would run out and she’d be forced to forage for food with her daughter strapped to her back, this being to whom she’s bound with the greatest urgency, but is yet to love. Which of her neighbours would be first to take up the pickaxe? How long would they all go hungry before they started eating each other?

She squeezes her eyes shut against the spiralling thoughts and attempts to mould the pillow into a comfortable shape. Giles turns to face her and Ruth peeks at him; a dream-smile flickers on his lips. She grinds her teeth at his brand of tired, of having a tough day at the office with too many tasks and not enough time. She remembers feeling that way herself and thought there was nothing else to measure the exhaustion by: the flop on the sofa with a glass of wine after the assault of the week, moaning about office politics and clients’ expectations, while privately acknowledging she’d aced the lot. That was before this new type of wipeout, a need for sleep that buzzes inside every cell of her body but is rarely satisfied. She is wired with tired.

Giles mutters and chuckles as if he’s continuing a fascinating conversation at the pub. Ruth puts out a hand to settle him in case he wakes Bess, but she’s afraid that too might disturb their little girl, so she pulls back to let Giles ramble on. In Japan they say a child is a river that flows between the parents, completing their landscape, but the valley that’s been carved in Ruth’s marriage is canyon deep. The couple call to each other from opposite sides of the divide, each of them straining to understand their partner’s new language.

It’s a 6 a.m. start to the day and Bess wakes with a cry that’s impossible to ignore, unless you’re a sleeping father. This petty carving up of time – who gets what and how much – deflates Ruth. It’s not the person she wants to be, nor is it any part of herself she recognizes from the past, though it would bother her less if she had the energy to turn it around. She takes her daughter downstairs for a feed and sits with Bess on the sofa, her mind revisiting last night’s call to the police, the shame more resonant for having opened up her fears to public scrutiny again. She’s been well for several weeks now, was convinced she’d finally cheated the monkeys who’d set up in her head after Bess was born, but it seems the old paranoias still have some power. Or perhaps it’s simply the insomnia that’s brought them back. She can’t tell any more.

Ruth keeps the TV on low in the background, the rolling news repeating images of a bobbing island of plastic junk, backlit by blue sky and sunshine. At least the world’s still turning outside of Ruth’s four walls, though what it’s turning into, she despairs. Giles ambles down an hour later and the couple share a breakfast of sorts. He makes tea and toast and holds charred jammy triangles up to Ruth’s mouth in between sending work emails. Her mug sits on top of paint charts and brochures for kitchen and bathroom fittings, the renovations they started with such enthusiasm having since stalled through lack of time and money. Before Bess, she and Giles had been too busy establishing careers and having fun to possess the foresight to save up a decent deposit, always assuming they’d get on the property ladder when the market settled, but it never stopped going up. Then, with a baby on the way and Ruth about to go on maternity leave, the couple dashed from a spacious rented flat with friends round the corner and cafes nearby to an affordable area too far away for anyone they knew to pop in. Ruth spends her days staring at bare plaster walls and woodlice that lurk where the skirting board should meet the floor.

‘How are you feeling today?’ Giles says with a smile so small it’s almost invisible. ‘You’re looking a bit brighter. The new medication must be really suiting you.’ He mimics the sing-songy tone that all the medics use, dumbing themselves down to what they believe is Ruth’s level. ‘Perhaps we could go on a bit of an outing this weekend?’

His polite caution sinks inside her; an ice cube creeping towards her stomach. She wonders if she and Giles have ever really known each other, or if they’ve always been children playing at grown-ups. Before Bess was born, a passion for adventure and faith in love was their cornerstone, only now that things have got serious, the best Giles can muster is a polite peck on the cheek. She wants to shake him and shout, ‘Remember when we laughed at couples on Valentine’s, eating at candle-lit tables in silence?’ Giles’s back is straight in the armchair opposite, legs together, hands clasped at his knees as if bracing himself for some new terror that might need containing.

The baby’s bottle slips in Ruth’s sweaty hand. She tightens her hold. ‘Yes, I’m feeling really great.’ Her tone is bright, magnified. She checks it down a notch. ‘Getting back to my old self.’

A frown glances across Giles’s face before he disguises it with his newly learnt toothy grin. Ever present in the room with them is Ruth’s illness, a feral child who dragged them to unspeakable places, only recently tamed. Neither she nor Giles signed up for this rebranding of love to duty, though both are unable to escape. She stays because Bess is her new reality, and Giles can’t leave because he’s responsible for his wife and, in turn, the safety of their daughter.