Dip into The Prodigal Son – the new high-octane thriller in the Orphan X series from bestselling author Gregg Hurwitz
More about the book! 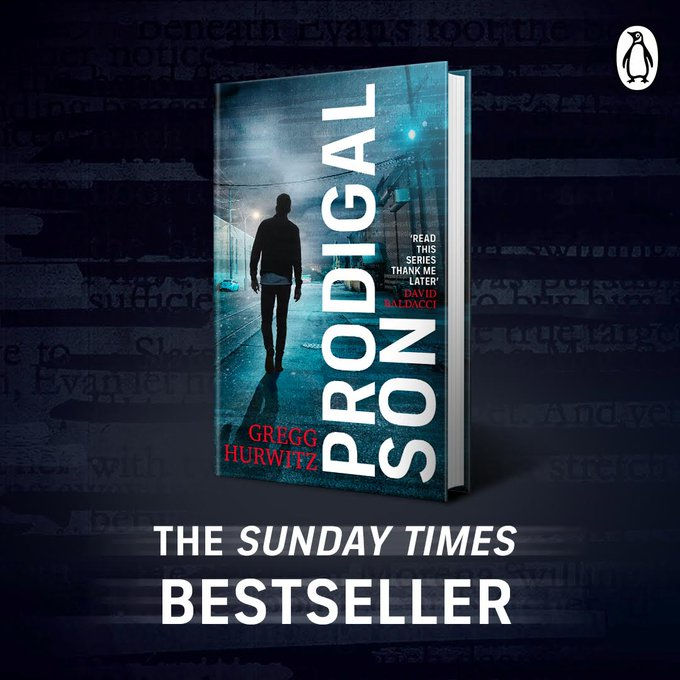 As a boy, Evan Smoak was pulled out of a foster home and trained off-the-books as a government assassin, codenamed Orphan X.

Forced into retirement, Evan Smoak gets an urgent request from someone he never expected – his mother. She needs his help protecting Andrew Duran, a man in the wrong place at the wrong time, with no safe place to hide. Running from a brutal assassination team, Duran’s only hope lies with Evan.

But when a hidden cabal catches on to what Evan is doing, everything he’s fought for is on the line – including his own life.

A New Brand of Danger

A stir moves through the Pride House Group Home, and seconds later adolescent faces pig against the muggy front window. Evan, at twelve, still has not hit his growth spurt. He jockeys for position and loses, Charles Van Sciver’s elbow knocking him to the rear of the pack. A tiny gap opens between Tyrell and Jamal, and Evan catches a fleeting glimpse of a slender man disappearing around the fence of the cracked basketball courts across the street. The conversation wafts back at him.

The herd is unsupervised, which is never good. Papa Z, the sturdy Polish-American house father, has retired to the bathroom with the Baltimore Sun. The fact that it’s a Sunday edition, paired with his chronic and oft-referenced constipation, means he could be missing for hours.

Van Sciver leads the way, naturally, as they spill out of their gone-to-hell row house in the shadow of the high-rise Lafayette Courts projects. They reach the asphalt park and spread out, only seven kids today because Danny got yanked into juvie and Andre’s been missing since Friday, no doubt on another fantasy quest looking for the parents he never knew. Nothing to see but brick and concrete, sweaty in the August humidity, and the usual junkies and corner boys. Cookie-cutter row houses stare back from all sides like crooked teeth.

‘I swear it was him again,’ Tyrell says.

The boys are adrenalised by the Mystery Man’s reappearance. He materializes at intervals, eyeing the boys as they strut and roughhouse in the park, the sun glinting off his gold watch. Masked by black Ray-Bans, he smokes through his pack with conveyor-belt efficiency, and when he finally moves, he walks at a leisurely pace, his fingers skating along the chain-link. The theories are endless – he’s a weenie-wagger; he’s a real-estate tycoon from Streeterville looking to adopt; he’s a cannibal who subsists on young flesh.

Van Sciver circles them up. ‘Get over here. Everyone over here!’

The blue bandanna is cinched around his forehead as always, his reddish blond bangs falling over the band of fabric. He’s a head taller than everyone except Ramón, but Ramón’s built like a skeleton so the height doesn’t get him much respect. Van Sciver wears a sleeveless Washington Redskins shirt to show off his biceps, which bulge enough to have grooves in them already. His upper lip sports a few scraggly hairs and a dried smear of the protein muscle drink he downs religiously every morning, mixed powder from the canister he painstakingly saves up for each month, the canister the other kids dare not touch.

Though he’s just two years older than Evan, they might as well be different species. They’ve tangled only twice, Van Sciver bloodying Evan’s nose when Evan stood up to him for cheating at blackjack and splitting his lip for backing Tyrell, whose sister is a whore but who probably doesn’t need to be reminded of it as often as Van Sciver thinks he does. Van Sciver came into the home when his dad got nailed for a bank heist, which makes him royalty in this zip code. A few coveted photographs and a yellowed newspaper clipping confirm his provenance.

Evan on the other hand is without the benefit of a rousing lineage. He simply appeared like something mythical – Moses in a basket of pitch-darkened bulrushes, Athena springing fully formed from the brow of Zeus. From various social workers, he’d gleaned only the barest facts about his origin. That his birth mother had travelled from out of state to turn him over for adoption in Maryland when he was six days old. That his first adoptive mother had been debilitated by a series of strokes she’d kept secret, right up until she and her overwhelmed husband had dropped Evan back into the system. Since Evan’s birth mother had retained the right to select the adoptive family, his fate was frozen while social services tried to locate her. But young women who travel out of state to relinquish newborns don’t want to be identified, let alone found. By the time the bureaucracy had unsnarled itself sufficiently to declare him ‘abandoned,’ he’d knocked around a series of homes. Even by the time he was four years old, his face had grown guarded, no longer a blank slate upon which a couple could project their dreams. He had a whiff of inferiority about him, another kid fit for the damaged-goods bin.

Papa Z’s group home is the latest stop on the merry-go-round. Five to fifteen kids on perennial rotation, graduating to trade school or jail or jobs involving wrenches and name-patch coveralls. The choices are few, the outcomes predetermined, the tracks laid pointing to a dismal future. That is what is so intriguing about the Mystery Man and his gold watch, no matter how awful his intentions may be. He does not belong to this world, to these city blocks. He represents not just a new brand of danger but a new road to a new place, and any route out of East Baltimore is a good one.

Van Sciver says, ‘I talked to Eddie in Paco’s garage who talked to his cousin who said the Mystery Man takes kids and turns them into something.’

Turns them into something. But what? The only point of reference Evan has for this comes from the army recruiting office across from the arcade in the mall. In between rounds checking the video-game change slots for forgotten quarters, he and Tyrell watch the slouchy teenagers go through that glass door bearing the decal of the American flag. They always come out a little straighter.

They come out men.

Ramón’s voice cuts through Evan’s reverie. ‘Turns them into sex-slave dicksuckers,’ he says, and a few kids risk snickers.

But Van Sciver continues, undeterred. ‘Eddie’s cousin? He said he knew a guy came up in a Westside home – New Beginnings? – and that guy said the Mystery Man picked another kid, the best kid, out of the group. The tallest. The fastest. The strongest. And that kid? One day he just vanished.’ He draws out the pause, the boys huddling closer, still breathing audibly from their dash across the street. Now it’s no longer a story but an urban legend, a campfire ghost story, and somehow that makes it more real. Evan senses some dark truth in the spaces between the lies. Van Sciver has let the cliffhanger linger long enough. Conspiratorially, he looks left, right, then back at the group. ‘Four years later he came back. For a day.’

A block or two over, a car is blaring Run-DMC with the bass cranked up high. The sound fades. Tyrell’s sneaker scrapes the asphalt as he leans in even closer. ‘And?’

‘He was built,’ Van Sciver says. ‘Muscles like this. And badass. Had a scar across his cheek. And a Porsche.’

The details are delicious, tantalising. Evan’s stomach pitches with excitement, as if he’s in a roller-coaster free fall.

A wino shuffles by tangentially, and Van Sciver shoots him a hostile glare. ‘Get the fuck outta here, Horace.’ Back to his captive crowd. ‘This guy, he said he went to a house – best house ever. A real home. Hot meals three times a day and Nintendo and a pool. You get your own room. Said they trained him.’

Van Sciver has to look down to meet his eyes. ‘No one knows.’