Celebrate our diverse and iconic dishes with Sharon Lurie’s new book A Taste of South Africa with the Kosher Butcher’s Wife
More about the book! 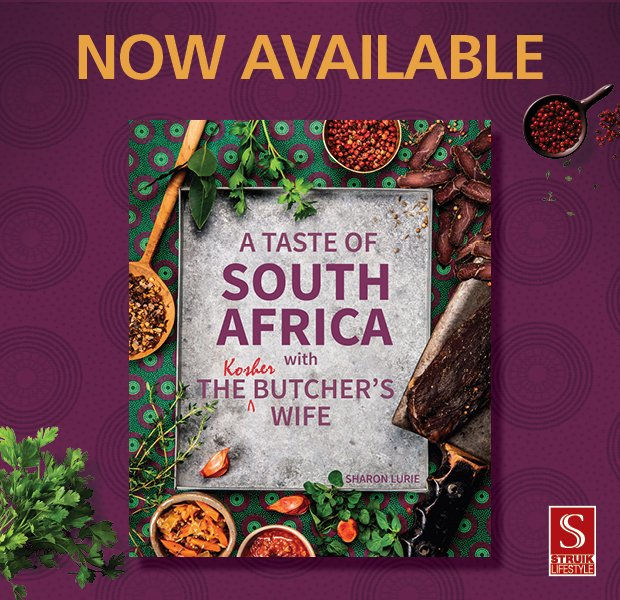 A Taste of South Africa with the Kosher Butcher’s Wife is out now from Penguin Random House!

After highly successful outings with her first two books, Sharon Lurie, aka the Kosher Butcher’s Wife, decided that it was time to make it official and combine the influences of her culinary inheritance, i.e. cooking kosher as a proud South African.

As she says, South African cuisine is as deliciously diverse as its inhabitants, from the many indigenous peoples to the waves of immigrants and settlers who have made the southern part of Africa their home.

In her latest book, A Taste of South Africa with the Kosher Butcher’s Wife, Sharon takes the home cook on an adventure encompassing many of the country’s diverse and iconic dishes, including traditional South African food with a Jewish twist.

This book not only includes meat and non-dairy recipes but mouth-watering dairy dishes to dive into. And in her imitable style, Sharon will keep you laughing along the way.

Sharon Lurie married into a fourth-generation family of butchers and, after experimenting and creating for 25 years, can now prove that meat from the forequarter need not be tough, dry and boring! As well as distributing her original recipes to customers, Sharon contributes recipes to the SA Jewish Report. Since the launch of her first book, Cooking with the Kosher Butcher’s Wife published by Struik Lifestyle, she has been writing articles for many local magazines and doing cooking demonstrations of her new recipes.