Mr Entertainment by Paula Fourie: A pioneering biography of one of Cape Town’s most beloved entertainers, Taliep Petersen
More about the book! 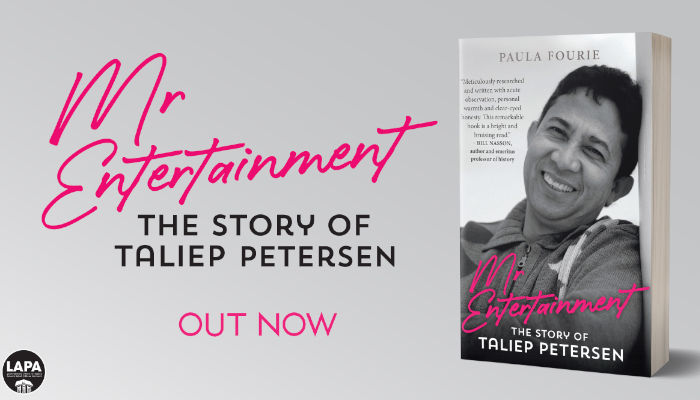 In Mr Entertainment, we hear the voices of the people who knew Taliep Petersen best: his family, friends and collaborators. Their stories bring to life the spaces he inhabited, vividly recounting scenes from his childhood, his rise to fame from the Cape Coon Carnival stage to the West End, his artistic collaborations, most notably with David Kramer, his family life, and his tragic death and its aftermath.

In this pioneering biography of one of Cape Town’s most beloved entertainers, we encounter Petersen as a complex and many-sided personality whose influence continues to reverberate in national life. Mr Entertainment evokes not just Taliep’s life, but also the music and entertainment worlds of the 1950s to 2000s and their diverse and irrepressible cultural traditions. Along the way, it brings us to the front row of South Africa’s difficult history.

Drawing on the musician’s personal archive and on more than fifty interviews conducted over a decade, Paula Fourie has pieced together a fascinating portrait of Taliep Petersen, acutely observed and poignantly captured.

Paula Fourie is a writer and musicologist who holds fellowships at the Bern University of Arts and Africa Open Institute at Stellenbosch University. She is a theatre director and co-dramatist (with Athol Fugard) of The Shadow of the Hummingbird.