A rebel in both politics and sex – The Love Song of André P Brink, the first biography of the esteemed writer, by Leon de Kock
More about the book! 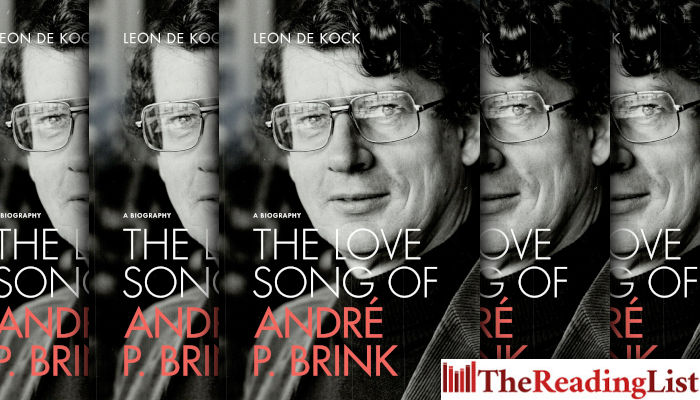 The Love Song of André P Brink is the first biography of this major South African novelist who, during his lifetime, was published in over 30 languages and ranked with the likes of Gabriel García Márquez, Peter Carey and Aleksandr Solzhenitsyn.

Leon de Kock’s eagerly awaited account of André Brink’s life is richly informed by a previously unavailable literary treasure: the dissident Afrikaner’s hoard of journal-writing, a veritable chronicle that was 54 years in the making.

In this massive new biographical source – running to a million words – Brink does not spare himself, or anyone else for that matter, as he narrates the ups and downs of his five marriages and his compulsive affairs with a great number of women. These are precisely the topics that the rebel in both politics and sex skated over in his memoir, A Fork in the Road.

De Kock’s biographical study of the author who came close to winning the Nobel Prize in Literature not only synthesises the journals but also subjects them to searching critical analysis.

In addition, the biographer measures the journals against additional sources, both scholarly and otherwise, among them the testimony of Brink’s friends, family, wives and lovers.

‘This story is bound to have a lasting impact on how Brink is read and understood. It is a timely and excellent reminder of Brink’s importance to South African literature.’ – Gerrit Olivier, University of the Witwatersrand, author of NP van Wyk Louw: Literatuur, Filosofie, Politiek (1992)

‘The biographer does not cower before Brink’s status as a writer. The style of writing is robust, muscular and witty, maintaining just the right balance between familiarity and distance. This biography is an example of incisive literary scholarship by an experienced researcher.’ – Louise Viljoen, Stellenbosch University, author of Die Mond Vol Vuur: Beskouings Oor die Werk van Breyten Breytenbach (2014)

Leon de Kock is a translator, poet, novelist and scholar. His most recent book is Losing the Plot: Crime, Reality and Fiction in Postapartheid Writing. His translation of Triomf by Marlene van Niekerk earned him the South African Translators Institute award for outstanding translation. His rendering into English of André Brink’s love letters to Ingrid Jonker in Flame in the Snow won the SALA Award for literary translation in and the English Academy of Southern Africa’s Sol Plaatje Prize for Translation. He lives in Cape Town.