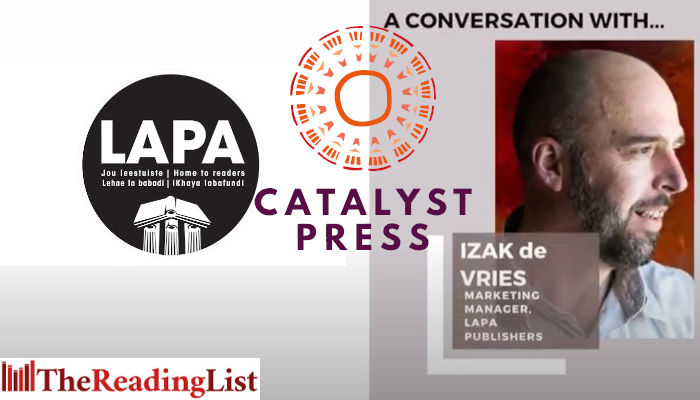 In this video, Catalyst Press South Africa office manager, SarahBelle Selig, chats with Izak de Vries of LAPA Publishers about distributing Catalyst books in South Africa, and the release of The Farm by Max Annas.

Catalyst Press is a United States-based publishing company started in 2017 by Jessica Powers, Young Adult author and longtime editor and publicist at Cinco Puntos Press. Jessica and Izak have been friends for many years, and Catalyst Press has published a number of LAPA titles in the US.

‘What I really appreciate about the Catalyst stories is that it broadens our reach,’ Izak says. ‘On the one hand, there are wonderful South African stories like The Wall and The Farm by Max Annas,’ he continues, ‘but then you have stories like The Lion’s Binding Oath that is from Somalia and A Road Called Down on Both Sides, which is situated in Ethiopia.’

Turning his attention to the recently released book, The Farm, Izak says, ‘The reason why I’m such a big fan of Max Annas is he’s so well known in Germany, he’s a megastar in Germany and in the English-speaking world not yet.’

Watch the video to find out why: