‘The hammerman is that kind of man. She will shoot him three times in the chest.’ – Read an excerpt from Mike Nicol’s new thriller Hammerman
More about the book! 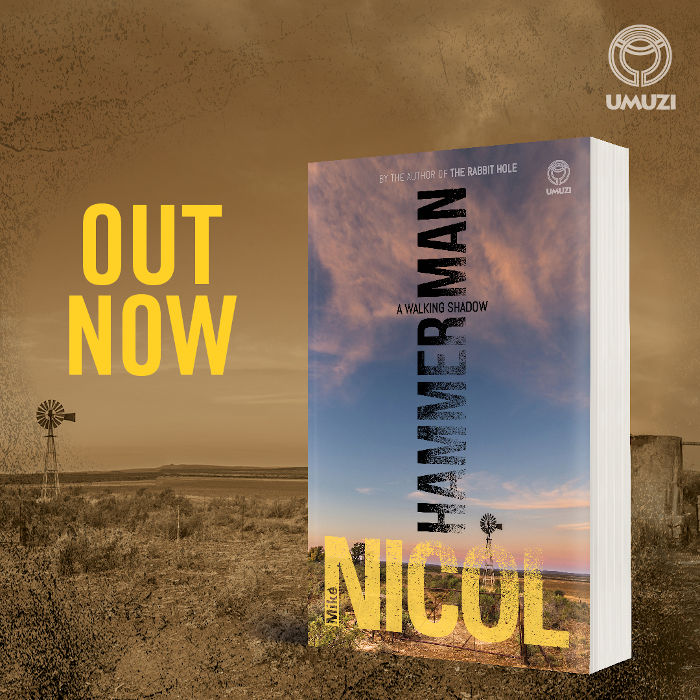 Children find a body in the Strandfontein sand dunes. A populist politician is gunned down outside parliament. His number two executed in bed with a high-class escort. A cabinet minister shot leaving a security estate. A cop assassinated in his car. Another in his beach house. And it all ties back to the murder of Swedish prime minister Olof Palme in 1986 – as private investigator Fish Pescado is about to discover.

He’s on the case, hunting a rogue agent through industrial estates, retirement homes, a farm in the Moordenaars Karoo. He’s also convinced someone’s out to kill his lover Vicki Kahn, lying in a coma in hospital. But he can’t watch over her all the time.

Fish and Vicki are about to get hit by history.

And history can be brutal, bloody and deadly.

He’s known as AJ. Has been called AJ forever. The nickname his mother gave him. The A stands for André. The J for Jacobs, his surname. No one ever calls him André. Nor would he answer to it. Anyone calls him André over the phone, he disconnects. To his subordinates in the cops he’s Colonel AJ. ‘No-shit Jacobs’ behind his back. Because AJ’s not a man to mess with. He’s in the anti-gang unit.

At this point in time (as his colleagues would phrase it), AJ is sitting in his car. A second-hand Tiguan. What the trade calls previously owned. Second-hand, previously owned, doesn’t bother AJ. It is a solid family car. In bloody good condition. Now he sits in the leather seats of the Tiguan. Waiting. 21:56.

He doesn’t smoke to pass the time. Loathes smokers. Can’t stand how they gather outside buildings to fume away. Time-wasters. As for vapers with their clouds of smoke, he hopes they all die of dread diseases.

Not a charitable thought, but he thinks it all the same.

In the car’s sound system is a cd of opera choruses. His drive music of choice. It was on earlier. ‘The Anvil Chorus’ is still full voice in his head. He has to consciously quieten it. Because right now he needs to listen to the silence. Be fully alert.

In his lap lies a .38 Colt Detective. Just in case. You never know. With people like her you have to be prepared.

He has met her here before. Once during the day. Once at night. She prefers the night. He had said it was all the same to him.

To which she’d replied, ‘I don’t want to be seen with you.’ And laughed. ‘What would your wife say?’

He had shrugged. He liked her. She could be funny. She was a stunner too. Gave off sex in heatwaves. At least in his imagination.

Most importantly, they could talk. They had what psychobabble called a meet­ing of minds. Well, whichever way you put it, they clicked.

So again it is the dark hours. The agreed time: 22:00. The agreement: on the hour or the meet is off.

He has been cautious. Twice he’s driven past the rendezvous spot. A gravel patch among stone pines on the edge of the common. Dog walkers park their cars there during the day. Anyone stops at night has other ideas: has come to trade.

AJ has come to trade.

He waits a few minutes past ten, is about to drive off, when the tap comes on his window.

There is another person waiting among the trees. Been there half an hour, standing in the blackness, staring across the common. Gazing at the further edge: at the lights of houses, the Red Cross Hospital, the headlights of passing vehicles. A contemplative figure. From where this person stands in the stillness of the night you can hear the drone of the city. You can imagine it is a beast moaning.

The person – a woman – is wearing a coat, gloves, rubs her hands together to keep them warm. Shuffles her feet. Has to keep out the winter chill, has to stay supple.

Then she hears a car slow down, turn into the parking area. The crunch of gravel beneath tyres. She comes around the trees to watch the driver park facing the road for a quick exit, kill the engine. Has to give a half-smile: the driver not a man to take chances. She appreciates cautious people.

This figure among the trees takes a 9-mil S&W Shield from a shoulder bag. Screws in the silencer. Approaches on the car’s blind side. Even in the darkness can’t have the driver glimpsing movement. Soft-shoes across the gravel, not a whisper to her stealth. Does a quick bend and sneak around the car. Reaches up to rap her knuckles on the driver’s window.

She knows exactly what will happen next. The driver will open his door. She doesn’t think of the driver as AJ. She knows the target’s name but thinks of him as the hammerman. Believes he will probably have a gun in his hand. Will tell her to bugger off. The hammerman is that kind of man. She will shoot him three times in the chest.

Fish Pescado on a stakeout in his Polo. Had followed a civil servant (female) to the home of a corporate CEO (male). The home in the quiet leafy Croft Road, Constantia. Had been sitting there fifty minutes. Had checked the surf report on his phone. The Atlantic was pumping. A decent wave with a fresh offshore. The sooner these two finished up, the sooner he could hit the beach. Had listened to a podcast: Surfing Dungeons. Not that he would ever go anywhere near Dungeons. A suicide wave.

Then phoned his lover, the lawyer Vicki Kahn. Their topic of discussion: mac cheese or veg lasagne for supper? Fish becoming used to having Vicki home on a full-time basis. Been months since she’d slept in her Wembley Square apartment. Even getting to the point where she should think of sell­ing it. Move in with him permanently.

‘You’ve got to help me, Fish.’ No sarky joshing. None of the usual how’s the blond surfer dude pi? Instead panic, alarm, fear.

A tone of voice Fish had never heard. The prof always lah-di-dah aca­demic. Superior than thou.

Fish wondering should he play this. Wind up the prof a little?

‘I need protection. These men are shooting one another.’

‘Heaven’s sake, Pescado. I am not joking. This is a war I’m caught up in. There are people bleeding. Possibly dying.’

‘Did you hear that?’

‘I did. Interesting. What’ve you got into, Prof?’

More shots. A run of automatic fire this time.

‘Get me out of here, Fish. I’m in a house of damnation with some clients. Doing business. Supposed to be doing business.’

‘What sort of clients? Where?’

‘You want me to get you out of Manenberg? Drive yourself out. Now. You shouldn’t even be there.’

‘I haven’t got a car. I was transported.’

Fish did the teenage eye-roll. ‘You let some gangster drive you? Are you completely mad? What for? You think you can open new markets for your cbd on the Cape Flats? You think you can get them macrodosing? Swopping tik for honey oil? Where’s your head? You stupid brainless …’ Fish wanted to say wanker but opted for ‘twit’. More academic. More in the professor’s vocabulary.

‘Please. I’m begging you. This is not my scene. I need you here. I need someone who understands. A translator.’

Fish got the address. Told the professor to keep his head down. Find the safest place he could.

‘I’m in the lav,’ came the wavering response.

In all these years, Fish thought, nice to have the prof poep-scared. Some sort of justice. Give him a taste of the real world.

Switched back to the lovely Vicki, said, ‘Got to go. Little emergency come up. The professor’s landed himself in a war zone.’