Something’s gone sour in the Winelands … Read an excerpt from Double Echo by François Bloemhof
More about the book! 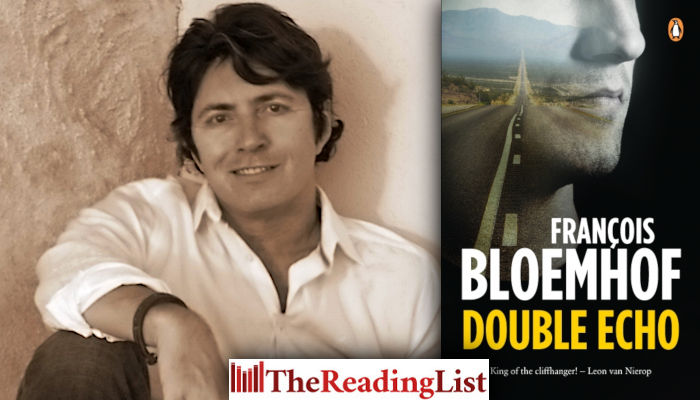 Penguin Random House has shared an excerpt from Double Echo by François Bloemhof.

Something’s gone sour in the Winelands …

Ex-cop Paul Mullan has a lot more baggage than the rucksack he’s carrying across the country. He’s trying to get away from that night, that hour when life as he knew it came to an end.

When Paul helps wealthy businessman Bernard Russell to change his car’s burst tyre near Riebeek-Kasteel in the pouring rain, Russell offers him shelter.

But the opulent wine estate Journey’s End is no safe haven, and Paul soon senses that his life is about to resemble one of those old black-and-white movies: he is the fallible hero, a young woman in Russell’s household the scheming femme fatale, and the outcome may be deadly.

François Bloemhof has had a prolific career, having written for adults, teenagers and children for more than 25 years. He has received numerous awards, including De Kat, FNB, ATKV, Kagiso and Sanlam prizes.

His is also a career of firsts: he wrote the first novel to be published with an original CD soundtrack composed by the author, the first book with its own computer game and the first ever e-book in Afrikaans. He has also produced work for film, TV, the stage and radio. He is a full-time writer when not attending to four demanding cats. Double Echo is his 24th novel for adults.

Just another day. True, it was wet after yesterday’s dry spell, and yes, he had moved on, but as on so many other mornings he didn’t have the vaguest notion where he would be spending the night.

Above him the grey heavens spread out. While the rain had not yet started there was just enough moisture in the air to keep his cheeks damp, plaster his hair to his forehead and send a chilly trickle down his neck.

So many of them already.

He was wearing a leather jacket over his black t-shirt. Jeans. Comfortable shoes; walking shoes. The remainder of his clothes were in his backpack and the suitcase he had in his left hand.

But he was carrying far more than that, of course.

His name was Paul Mullan and he was thirty-four years old.

As the train had crawled into Wellington station half an hour previously, he remembered once reading that all trains had to stop there. He had a ticket for Cape Town, but seeing as it was just another junction and almost certainly not a destination, he was free to hop off should he have the inclination. The inclination arrived; he went with it.

On the platform he was alone with the rustling, pale-brown leaves.

In the gents he had held his breath while making use of one of the country’s most dubious urinals. Next he set off for the little café, where he bought something for his rumbling stomach from the semicomatose cashier. Due to the lack of alternatives he walked away with a styrofoam tub of slap chips covered in grubby cling wrap. The chips no longer really qualified as slap, their advanced state of rigor mortis suggesting they had been fried the previous day, if not before that. But it was just ever so slightly better than nothing. Outside the station, chewing as he went, he walked past a tangle of early-morning boozers sitting and philosophising on the broken tar.

Then he had to make a choice: the Railway Hotel with its roof of rusty corrugated iron was not an option, which meant he had to decide between taking a right to cross the bridge into Wellington, or carrying on straight and leaving town.

The road ahead appeared to be in good condition. Sometimes a simple fact like that makes up your mind.

The inclement weather did not detract from the natural beauty that surrounded him: so many shades of green, graceful hills, mountains made for wondering at. Space. Paul Mullan would have liked to believe that space could make a difference, and that somewhere close by a solution might lie waiting, a solution that had escaped him in the frenetic bustle of Pretoria. But there had already been other expanses, and other cities, and a variety of weather conditions, and he was still just as screwed as when he had started his journey.

But who knew. The alternative was to stop dead, and then he would lose it.

There was no sound other than his even paces on the hard shoulder – or yes, if he opened his ears to it: the swoop of wings, a bird seeking shelter, or so he imagined; something rustling in the bushes nearby, maybe a small animal hiding from him; the wind, rasping wistfully; and a … car  approaching. His hand shot out, well rehearsed, thumb up, even though he didn’t expect it to stop.

Sure enough, they pressed on, a family in a white Yaris. There was just enough time for his keen sight to pick up the shape of two large heads in the front and three smaller ones in the back, and then the car disappeared behind the sign.

Each of these places seemed like a valid option, or equally not.

He kept walking, passing turn-offs to farms and nurseries. There were no other cars. It seemed that everyone in the district already was where they needed to be.

To his right the area’s characteristic greenery was absent, having yielded to grey veld in which clusters of sheep huddled miserably, well-padded rumps in the air. To the left things looked as they were meant to, a lush green. Long wires supported by tall posts snaked across the contours, staking their claim in the name of modernity. Of course, the neatly parcelled land already signified human intervention, but unlike the stark rigidity of the power lines it seemed right, as if nature had accepted the orderly alterations.

About eight kilometres further he saw a turn-off to the left. In the way that some people develop an internal clock, he had grown an odometer. If he walked at a set pace, he knew how long it would take him to reach a particular spot in the distance.

Time for another decision. Straight, towards Ceres, or should he go and see what lay to the left?

What difference would it make? He had no idea why he was hesitating. It was as if his senses had sharpened and he could hear more than was audible to others. Could feel something extra in the air, too.

That was it. He frowned. Had he believed in such a thing as a sixth sense, he would have thought that it was now trying to convince him not to follow the turning. Straight ahead would be better. He had never been to Ceres and it was as good a place as any.

But, just to prove to himself that he paid no heed to something as unreliable as a premonition, he left the R44.

Walking gives you plenty of time to think. Too much. But he was here to think. This was Operation Clear Your Mind.

He thought of the people he had left behind. Leaving them was an insult, because they had wanted to help. Nobody had a grudge against him.

He’d had to think of what to do next. New job, new place to stay. Now he couldn’t imagine that he would stick anywhere, put down roots, even though in the past, just like so many people, he had gone looking for such a place and found it. Had found the right vocation too, but he was done with that forever.

He made his way over a bridge, looked down onto a swollen river, took a bend in the road, left the village of Hermon further behind. By now he pretty much knew he was more than four and less than five kilometres from the turn-off. His eye followed the rise of the hills up to where they turned to mountains far in the distance. Maybe he would have to call it a day around there, as his legs were growing tired, his soles feeling tender.

He wondered what still differentiated him from a hobo – the belief that he would, after all, give up walking one day? Who said most hobos didn’t try to convince themselves of the same? At least he was getting to see the country.

The sun squeezed through a break in the clouds. Here, nature put on even more of a display than before, and he wanted to absorb all the beauty, because how could he, now in his mid-thirties, be blind to it? He had to remember his life was far from over. He had been searching so long, struggling, filled with remorse. Finding nothing, because no salvation was to be found in external means, as any psychologist or indeed any self-help manual could have told him. The answer lies inside, people are your own personal hell, a road is a road, blah-blah-blah.

Then the sun was gone. Dark spots appeared on the tar ahead of him and around him.

The drops started coming down with more urgency.

He didn’t turn around as the hum of the engine grew louder. The vehicle would drive past, he knew, because even a Good Samaritan at the wheel would feel he was gliding down here too merrily, and why stop for some hapless fool who would only spoil the upholstery with his sodden arse? It would be expensive upholstery, too, as the engine sounded like it belonged to a BMW or a Mercedes.

Nevertheless, he shot out his arm, thumb pointing up.

A Mercedes. First the flash of silver metal, then a glimpse of a pair of hands on the steering wheel. The driver was in uniform. Paul just about raised his eyebrows in response; after all, how often did you see such a thing as a chauffeur these days? Well, sometimes, but here?

The man, wearing a cap of the same light grey as his jacket, turned his head slightly, looking at him out of the corner of his eye, and Paul thought it might be his weariness that made him believe he could in that one instant discern an air of superiority in the way he looked away, chin up.

Upon spying the older man in a dark suit in the back, Paul decided he had not been imagining things, because his glance certainly qualified as haughty.

And there went the silver symbol of wealth, sailing to some or other destination where no doubt there was a fire crackling in the hearth, the most expensive brandy waiting to be poured and an electric blanket heating the king-size bed.

If such things could bring happiness, Paul was wishing for them now.

With annoyance he realised he still had his arm out.

Then he heard it.

In a split second he was back there, that night, in the hour from which he cannot escape, no matter how far his feet carry him.

It was as if a great hand had grabbed him by the chest, thrust itself deep inside to find his heart and squeezed, squeezed. He couldn’t breathe.

Two fainter sounds followed, the silence of the valley having been brutally suspended. Its serenity had been a mere illusion.