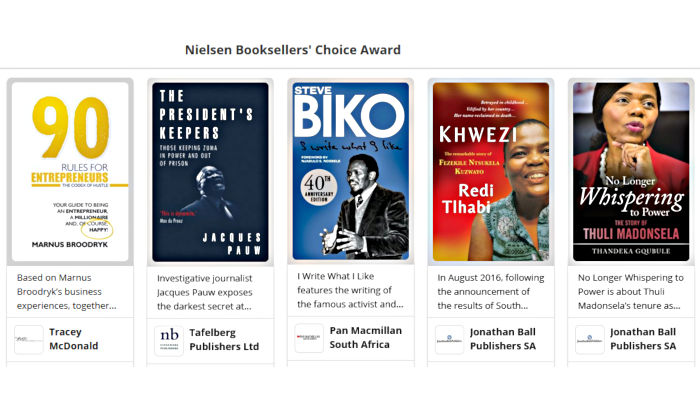 The shortlist for the Nielsen Booksellers Choice Award – a prize for South African booksellers’ favourite book – has been announced.

The award is voted for by South African booksellers, and goes to the local book that they ‘most enjoyed selling or that sold so well that it made a difference to the bottom line of booksellers across the country’.

Last year’s winner was Trevor Noah, for his autobiography Born A Crime and Other Stories, who said in his acceptance speech: ‘It’s not just my story, it’s a story that we share in South Africa, so it means a lot to me that South Africans enjoyed it’, and jokingly thanked his school English teacher, for ‘forcing me to write essays when I didn’t want to’.

This year’s award ceremony will be hosted at the Johannesburg Wanderers Club on Tuesday, 28 August 2018.

The five titles featured on the 2018 shortlist include 90 Rules For Entrepreneurs, based on Marnus Broodryk’s business experiences with insights from his friends and fellow entrepreneurs.

Two Jonathan Ball Publisher titles made it into this year’s shortlist: Redi Tlhabi’s Khwezi: The Remarkable Story of Fezekile Ntsukela Kuzwayo – the story of four courageous women who interrupted Jacob Zuma’s victory address at South Africa’s heated municipal elections, and Thandeka Gqubule’s No Longer Whispering To Power: The Story of Thuli Madonsela – the story of the South African people’s attempt to hold power to account through the Office of the Public Protector.

The 40th anniversary edition of Steve Biko’s I Write What I Like also made it into the final five. The title features the writing of the Black Consciousness leader before his untimely death in detention at the age of 30. Biko was instrumental in uniting Black Africans in the struggle against the apartheid government.

Lastly, The President’s Keepers: Those Keeping Zuma in Power and Out of Prison by investigative journalist Jacques Pauw rounds off the shortlist. This bestselling book exposes a secret at the heart of Jacob Zuma’s compromised government.

‘We’re grateful for SAPnet [the South African Publications Network], our partners in South Africa, who have worked so tirelessly to bring this event together and to help shine a light on esteemed authors and important book titles across the country.’