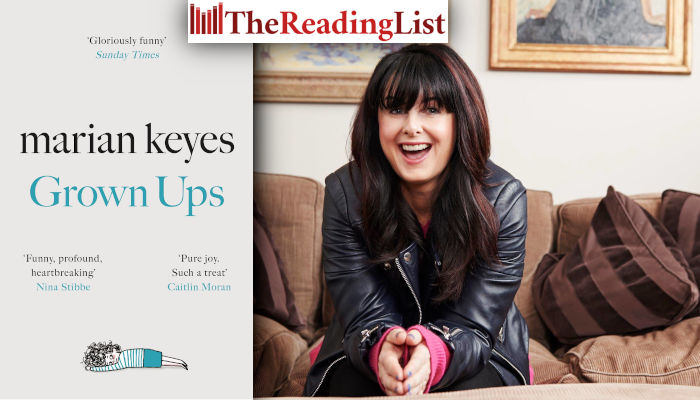 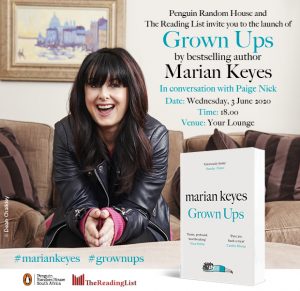 ‘It’s SUCH a treat. I felt like I was reading the cleverest cream cake of words.’ – Caitlin Moran

They’re a glamorous family, the Caseys.

Johnny Casey, his two brothers Ed and Liam, their beautiful, talented wives and all their kids spend a lot of time together – birthday parties, anniversary celebrations, weekends away. And they’re a happy family. Johnny’s wife, Jessie – who has the most money – insists on it.

Under the surface, though, conditions are murkier. While some people clash, other people like each other far too much …

Everything stays under control until Ed’s wife Cara, gets concussion and can’t keep her thoughts to herself. One careless remark at Johnny’s birthday party, with the entire family present, starts Cara spilling out all their secrets.

In the subsequent unravelling, every one of the adults finds themselves wondering if it’s time – finally – to grow up?

Johnny Casey launched into a fit of energetic coughing – a bit of bread down the wrong way. But the chat around the long dinner table carried on. Lovely. He could die here, literally die, on his forty-ninth birthday, and would his brothers, their spouses, his own wife, Jessie, or any of the children, even notice?

Jessie was his best hope but she was off in the kitchen readying the next elaborate course. He could only hope he survived to eat it.

A sip of water didn’t help. Tears were streaming down his face and finally Ed, his younger brother, asked, ‘You okay there?’

Manfully, Johnny waved away his concern. ‘Bread. Down the wrong way.’

‘Thought for a minute you were choking,’ Ferdia said.

Well, why didn’t you say something, you useless tool? Twenty-two years of age and more concerned with Syrian refugees than your stepfather expiring!

‘That’d be a shame,’ Johnny croaked. ‘To die on my birthday.’

‘You wouldn’t have died,’ Ferdia said. ‘One of us would have tried the Heimlich manoeuvre.’

Someone would have needed to notice I was dying first.

‘You know what happened recently?’ Ed asked. ‘Mr Heimlich? The man who invented the Heimlich manoeuvre? Finally, at the age of eighty- seven, he got to do it on someone for real.’

‘And it worked? He saved the person?’ This was from Liam, the youngest of the Casey brothers, right down at the end of the table. ‘Be a bit mortifying if he did it, then the person snuffed it.’

Liam tended to bring the snark to any situation, Johnny reflected. Look at him there, lounging back in his seat with a careless grace that made Johnny’s teeth itch. At forty-one years of age, Liam was still propelling himself through life, using only good looks and swagger.

The cut of him, with his surf-y hair and half the buttons open on his crumpled shirt.

‘Like Mr Segway,’ Ferdia said. ‘Invented the Segway, said they were totally safe, then died on one.’

‘In fairness,’ Ed said, ‘his only claim was that you’d never fall over on one.’

‘So what happened?’ Johnny, despite his resentment at the lot of them, was interested.

‘He accidentally drove one off a cliff.’

‘Oh, God.’ Nell, Liam’s wife, dissolved into giggles. ‘Started believing his own publicity? You know, they were a bit safe, so he got fooled into thinking they were bullet-proof?’

‘Got high on his own supply,’ Ferdia said.

‘You’d know about that.’ Liam threw his nephew a dark look.

So the feud between those two is on again? What is it this time?

He’d ask Jessie. She kept tabs on the various Casey alliances and grudges – it gave her life. Where was she anyway? Right, here she came. Carrying a trayful of, by the looks of things, sorbets.

‘What about us?’ Bridey piped up. She was twelve years of age and operated like a union rep for the five youngest cousins. She policed their rights with vigilance. ‘We can’t possibly have vodka, we’re far too young.’

Course she was, Johnny thought. Fair play to her. Never dropped the ball.

‘Just lemon for you guys.’

Sometimes Johnny didn’t know how Jessie did it. Even though Bridey was his first-born, he sometimes found her insufferable.

Bridey issued stern instructions to the younger kids that if their sorbets tasted ‘in any way funny’ they must desist from eating them with immediate effect.

She actually said those words. ‘Desist.’ And ‘with immediate effect’.

It was at times such as these that Johnny Casey wondered at the wisdom of sending children to expensive schools. They created monsters.

Jessie resumed her spot at the head of the table. ‘Everyone okay?’ she asked.

Cheerful noises of assent rose, because that was how things rolled in Jessie’s world.

But when the hubbub quietened down, Ed’s wife, Cara, said, ‘I have to say it, I’m bored out of my skull.’

Several heads jerked up from their sorbets. All conversation ceased.

‘I mean, sorbets?’ Cara asked. ‘How many more courses do we have to sit through? Couldn’t we just have had a pizza?’

Okay, Cara had one or two issues. To put it mildly. But she was a sweetheart, one of the nicest people he’d ever met. Johnny’s gaze went to Ed: it was his job to keep his wife under control. If that wasn’t a very sexist thought and, yes, he admitted it was.

But Ed looked stupefied with confusion. ‘What the hell?’ he asked. ‘Jessie, I’m sorry!’

Jessie was dumb with shock.

Trying to pull things back to normal, Johnny adopted a light-hearted tone. ‘Ah, come on now, Cara. After all the work Jessie’s done …’

‘But she did nothing! The caterers did it.’

‘She always has these things catered.’

Jessie would never use caterers. Cooking is her thing.

Up and down the table, the mood was of scandalised commotion.

‘How much have you had to drink?’ Ed asked Cara.

‘– on the head!’ Ed finished her sentence and his relief was audible. ‘She got a bang on the head earlier. A sign fell off a shop and hit her –’

‘That’s not what happened –’

‘We thought she was okay –’

‘You should go to A and E!’ Jessie was struggling to recalibrate to her default personality of Nurturing and Bossy. ‘You’re obviously concussed. Go this very moment, why are you even here?’

‘Because Ed needs Johnny to loan him the money,’ Cara said.

‘Johnny?’ Jessie locked eyes with him.

He knew the drill: she’d say no more here, but there would be hell to pay later. However, he still had something in his arsenal. ‘Jessie? What caterers?’

Unexpectedly, Ferdia glared at Johnny. Angrily he said, ‘You’re really doing this to her?’

Ferdia paused. His tone towards his stepfather had many layers. ‘You? You’re entitled to nothing.’

Everyone else was still watching Jessie: did Superwoman really use caterers?

‘We shouldn’t be exposed to this,’ Bridey said, in an undertone. ‘We’re children. It’s inappropriate.’

Pinned by the collective gaze, Jessie’s eyes flicked back and forth. She looked panicked. ‘Yes, okay, yes!’ She sounded exasperated. ‘Sometimes. So what?’

‘And that was the day my childhood ended,’ Bridey murmured.

‘How did you know?’ Liam asked Cara.

‘I used to do Jessie’s accounts,’ Cara said. ‘A hefty payment to the Cookbook Café popped up each time we had another of these endless dinners. You don’t need to be a rocket scientist –’

‘I have five children, between eight and twenty-two!’ Jessie cried. ‘I run a business, there are only so many hours in the day and, Johnny, you’re never here and –’

Cara stood up. ‘I’d better go to the hospital,’ she said. ‘Before I fall out with every one of you. Come on, Ed.’

‘Hey, Cara, do you really like my new hair?’ eighteen-year-old Saoirse, interrupted.

‘That fringe makes your face look like the moon.’

It did make her face look like the moon! Cara was spot-on. All the same, you can’t say that to a teenage girl.

At Saoirse’s devastated expression, Cara looked sick with remorse. ‘I’m so sorry, Saoirse. But it’ll grow back. Come on, Ed.’

‘Before you go?’ Liam’s eyes were narrowed. ‘Did you really think that massage I gave you was … What was the word you used?’

‘“Dreamy”? No. I hated it. Forget being a masseur. You are terrible.’

‘Hey!’ Nell jumped in to defend her husband. ‘He’s doing his best.’

‘Why are you bigging him up?’ Cara asked.

Suddenly, Liam was energised. He smelt blood. ‘Why wouldn’t she back me up? Tell us, Cara, come on, tell us.’

‘Tell me.’ Liam’s tone was urgent.

Then, because Cara was concussed, confused and long past caring, she told them everything.