New from Petina Gappah: Out of Darkness, Shining Light – A radical novel that resurrects the voices of those in the shadows of history
More about the book! 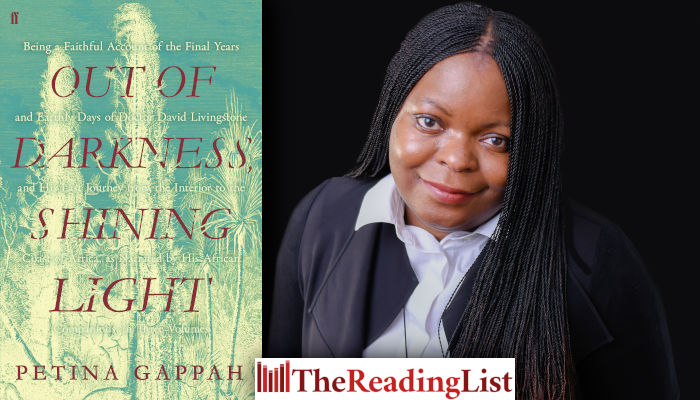 ‘This is how we carried out of Africa the poor broken body of Bwana Daudi, the Doctor, David Livingstone, so that he could be borne across the sea and buried in his own land.’

This is the captivating story of the 69 loyal men and women who carried explorer and missionary Dr Livingstone’s body, his papers and maps, 1,500 miles across the continent of Africa, so his remains could be returned home to England and his work preserved there.

The wise men of his age say Livingstone blazed into the darkness of their native land leaving a track of light behind where white men who followed him could tread in perfect safety. But in Gappah’s radical novel, it is those in the shadows of history – those who saved a white man’s bones; his dark companions; his faithful retinue on an epic funeral march – whose voices are resurrected with searing intensity.

This final, fateful journey across the African interior is lead by Halima, Livingstone’s sharp-tongued cook, and three of his most devoted servants: Jacob, Chuma and Susi. Their tale of how his corpse was borne out of 19th-century Africa – carrying the maps that sowed the seeds of the continent’s brutal colonisation – has the power of myth. It is not only symbolic of slavery’s hypocrisy, but a portrait of a world trembling on the cusp of total change – and a celebration of human bravery, loyalty and love.

Out of Darkness, Shining Light is a novel that encompasses all of the hypocrisy of slavery and colonisation – the hypocrisy at the core of the human heart – while celebrating resilience, loyalty, and love.

‘Engrossing, beautiful, and deeply imaginative, Out of Darkness, Shining Light is a novel that lends voice to those who appeared only as footnotes in history, yet whose final, brave act of loyalty and respect changed the course of it. An incredible and important book by a masterful writer.’ ​– Yaa Gyasi, author of Homegoing

Petina Gappah is a Zimbabwean writer with law degrees from Cambridge, Graz University and the University of Zimbabwe. Her short fiction and essays have been published in eight countries. Her debut story collection, An Elegy for Easterly, won the Guardian First Book Award in 2009. Her first novel, The Book of Memory, was published in 2015, and was longlisted for the Bailey’s Women’s Prize for Fiction.