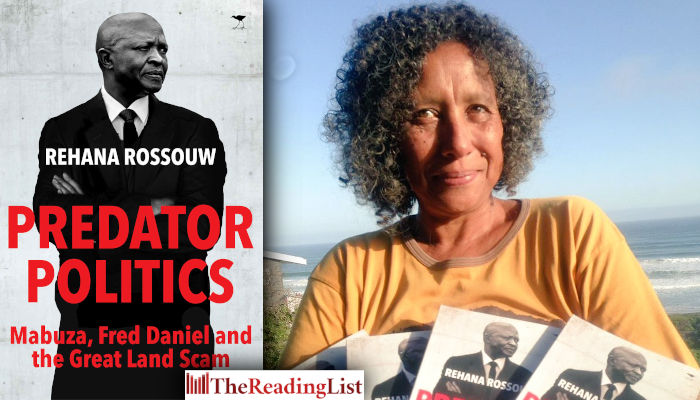 Predator Politics: Mabuza, Fred Daniel and the Great Land Scam, the new book from Rehana Rossouw, is out now from Jacana Media!

Corruption cost taxpayers around R1.5 trillion during Jacob Zuma’s spell as president of South Africa. Despite attempts by the police, the courts and the Public Protector to stem the rising tide of graft in South Africa, several politicians were rewarded with high office after stealing the aspirations of millions of people.

Fred Daniel, one citizen among many targeted by predator politicians, stood up against the scourge. The retaliation he faced after attempts by corrupt politicians to grab his nature reserve in Mpumalanga included vandalism, arson, smears and death threats.

His nemesis is Deputy President DD Mabuza, who presided over several departments in the province that were wrecked by graft before he ascended to the position of the second most powerful politician in the country. Fred has won more than twenty cases over the past fifteen years in magistrates’ and high courts where his claims of corruption-related harassment were found credible.

The North Gauteng High Court is hearing his damages claim against Mabuza, government departments and officials amounting to more than R1 billion. It stems from Fred’s exposure of fraudulent land scams allegedly orchestrated by Mabuza.

At great personal cost, Fred and his family stood up to corruption. They endured the loss of a livelihood and their home – and the fear that follows when the government places a target on the back of a citizen blowing the whistle on its misdeeds. Fred will not back down. For him, failure is not an option.

Rehana Rossouw was born and rooted in Cape Town but is currently in self-imposed exile in Johannesburg. She has been a journalist for three decades and has also taught journalism and creative writing. She has a master’s in Creative Writing from Wits University. What Will People Say?, her debut novel, was shortlisted for the 2015 Etisalat Prize for literature and won the 2017 Humanities and Social Sciences Award in the category of single-authored fiction. Her second novel, New Times, was released in 2017, and was longlisted for the 2018 Sunday Times Literary Awards. Read an excerpt from New Times here.

Get you copy from your closest bookstores. Word is the stock is running low 🔥 pic.twitter.com/1G7AszcgRt

Only the best non-fiction will do this book season!

"Predator Politics: Mabuza, Fred Daniel and the Great Land Scam" is hot of the presses and in stores now!

Read this riveting book by Rehana Rossouw, and you decide if you want DD Mabuza to be your next president. pic.twitter.com/eQcL23oziq

"Predator Politics" was supported by a Henry Nxumalo Grant, which is funded by the Millennium Trust and managed by the Wits Journalism Department. This book is dedicated to all the journalists who tell stories that hold the political mafia to account.
In stores now! pic.twitter.com/2b9j9kJUhK