Kolisi: The first black Springbok captain – read an excerpt from Miracle Men: How Rassie’s Springboks Won the World Cup by Lloyd Burnard
More about the book! 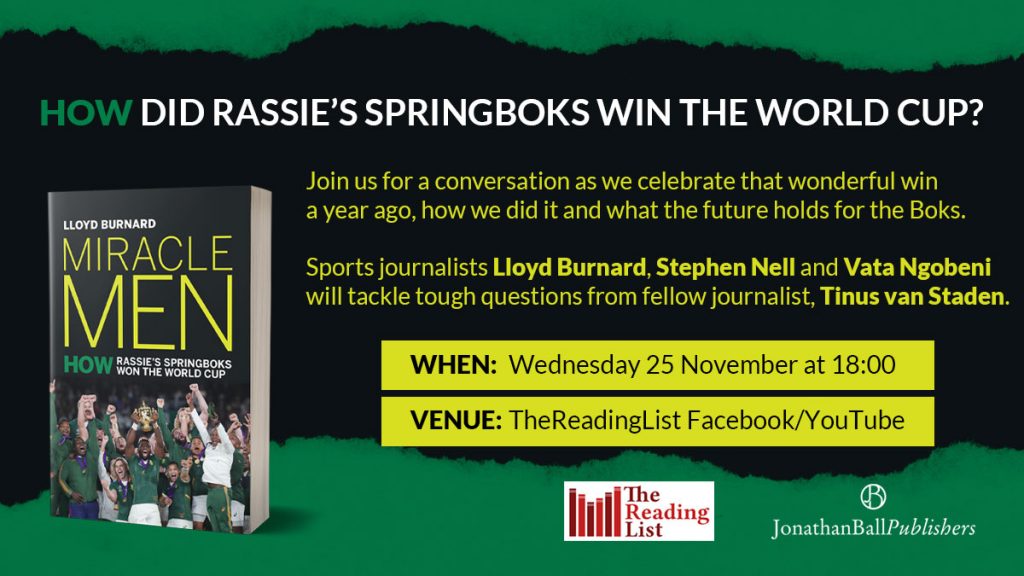 Jonathan Ball Publishers has shared an excerpt from Miracle Men: How Rassie’s Springboks Won the World Cup by Lloyd Burnard.

The book will be launched in a virtual event this evening (Wednesday 25 November 2020) – when sports journalists Lloyd Burnard, Stephen Nell and Vata Ngobeni will tackle tough questions from fellow journalist Tinus van Staden.

When Rassie Erasmus took over as coach of the Springboks in 2018, few thought they had a chance of winning the Rugby World Cup. The Boks had slipped to seventh in the world rankings and lost the faith of the rugby-loving public. Less than two years later, jubilant crowds lined the streets of South Africa’s cities to welcome back the victorious team.

Sportswriter Lloyd Burnard takes the reader on the thrilling journey of a team that went from no-hopers to world champions. He examines how exactly this turnaround was achieved. Interviews with players, coaches and support staff reveal how the principles of inclusion, openness and focus, as well as careful planning and superb physical conditioning, became the basis for a winning formula. The key roles played by Rassie Erasmus and Siya Kolisi shine through.

There were ups and downs along the way: beating the All Blacks in Wellington during the Rugby Championship was a high point, but then came Kolisi’s injury, while in Japan the distractions of a volatile support base sometimes shook the players’ focus. Miracle Men is filled with marvellous anecdotes and sharp insights. It is also inspiring testimony to what can be achieved when a group of South Africans from all backgrounds come together as a team.

There was a palpable feeling of renewal by the time the 2018 inbound series against England got under way at Ellis Park on 9 June. Absolutely nothing had yet been achieved in the way of results, but Erasmus’s squad selections and his decision to appoint Siya Kolisi as captain were refreshing and emphatically confirmed the dawning of a new era. Kolisi’s appointment, at this stage, was for the England series only and Erasmus would re-evaluate the captaincy afterwards. Kolisi had led at Super Rugby level and had always been a popular figure in the dressing room, but he could not have been prepared for this trip into uncharted waters. At his first pre-match media briefing, Kolisi carried himself with a level-headedness and composure that would become familiar features of his leadership in the months to come.

He told the three Bok debutants – Aphiwe Dyantyi, Sbu Nkosi and RG Snyman – to trust in the fact that they had been picked for the Springboks because there was something special about them. He told them to enjoy themselves and savour the moment, recalling his own nerves during his Test debut – against Scotland in Nelspruit in 2013 – to reassure them that such feelings were natural.

In those early days of his captaincy, Kolisi realised that questions over the significance of being the Springboks’ first black captain were likely to arise. In the months to come, it would become a line of questioning that Kolisi would have to tackle in every country the Boks visited, right up to the end of the World Cup in Japan. He never once backed down from what he considered a massive responsibility and, as the journey progressed, he began to understand the importance of his appointment more and more. He always brought the conversation back to rugby, though. He knew, as Erasmus had drilled home, that the Boks could not achieve anything special unless they were a winning side. Given his own struggles with form in Super Rugby 2018, Kolisi was more determined than ever to let his performances on the field do the talking.

Erasmus did not anticipate, nor was he prepared for, the reaction to the appointment. While he understood its social significance, he had simply never viewed the Springbok captaincy as something that could make or break a side.

‘I was offered the Springbok captaincy twice in my career and I said “no” twice,’ Erasmus says.

‘Nick Mallett came to me twice and I turned it down both times. He asked me why and I told him that a captain had to set the climate in the team. I liked analysing, but I also liked a dop [drink] and I liked fun. A captain is the guy who sets the climate and I didn’t think that was me.’

In his early days as Free State coach in 2005, Erasmus had not immediately appointed a captain. ‘It was because, to me, it shouldn’t be such a big thing in a team if everybody takes ownership,’ he says.

‘The fact that Siya was black and was captain was a huge thing, but the captaincy itself for me was never an issue. Other people look at captains and say the whole team revolves around him, and I didn’t see it like that. I think that’s why I was maybe naive.’

The images of Kolisi, in his 29th Test match, leading the Boks out in front of over 55 000 people in Johannesburg would be replayed countless times in the weeks and months to come. Wearing the iconic number 6 jersey – the same number that Francois Pienaar and Nelson Mandela had donned, at the same venue, when they lifted the Webb Ellis Cup together in 1995 – Kolisi was greeted with a roar as he took to the lush Ellis Park turf. In that moment, South African rugby showed progress. It had taken a long, long time, but the outpouring of emotion on the day suggested that it might have been worth the wait.

Kolisi was calm on the surface, taking it all in his stride as the cameras zoomed in on him to capture a moment in history. It was a lot for any 26-year-old to internalise, let alone one who had grown up in such difficult circumstances.

Kolisi’s story is now well known. He comes from the township of Zwide, just outside Port Elizabeth, and to refer to his childhood as challenging would be a gross understatement. Kolisi, like so many in South Africa, grew up sidelined from the opportunities and privileges that others in more fortunate positions take for granted. With his father away working and his young mother – she was 16 when he was born – often unable to deal with life’s challenges, Kolisi and his siblings were raised by his grandmother. Life was extremely difficult for them. Kolisi would later reveal just how tough the environment was during his time at Emsengeni Primary School, with stories of often going to bed hungry and not having necessities like school shoes and clothes. Rugby, quite literally, saved Siya Kolisi’s life.

After making a provincial Eastern Province side at Under-12 level, Kolisi played in a tournament in Mossel Bay, where his superb performance drew attention. He had already caught the eye of the scouts at Grey Junior School while representing his local club, African Bombers, in a fixture against one of the school teams a few months earlier. On the strength of his performance in Mossel Bay, Kolisi was given a full scholarship to Grey Junior. He entered the school in Grade 7 and naturally progressed into Grey High School.

‘I think this was a massive benefit for him,’ Dean Carelse, one of Kolisi’s coaches at Grey High, revealed in an interview with Rayder Media, ‘as he had to be street-smart and think his way around the field as opposed to physically dominating everyone. He read the game extremely well and always found himself at the right place at the right time. In my opinion, his biggest strength during these early days was his ability and willingness to make his teammates look better than himself on the field. He was always eager to pass and let others take the shine through his playmaking and distributing, which to this day is still a big characteristic of his play and character.’

Kolisi’s grandmother had already passed away, and his mother died soon after he started high school. It was a turning point in Kolisi’s life. While it was difficult moving away from his family in Zwide, the move to Grey would shape the future of a man who was destined for greatness. While many of his township friends were turning to alcohol and drugs, Kolisi knew that rugby was his way out. He earned provincial honours throughout high school, playing Craven Week for EP for two years in 2008 and 2009.

The story of how Kolisi overcame the odds to rise to the top of his sport is inspiring enough. But the way he grew in the captaincy role, between that first Test against England and the World Cup final against the same opposition nearly a year and a half later, is equally remarkable.

‘That was a very special moment,’ assistant coach Mzwandile Stick recalls of Kolisi leading the Boks out for the first time. ‘To see the change in our rugby in South Africa, where we have always talked about the opportunities that we didn’t get in the past. There was a black captain leading our national team. It was something that was so good to see and not because I am close to Siya, but because of what it meant to our country.’

As the Boks lined up to sing ‘Nkosi Sikelel’ iAfrika’, the cameras zoomed in on Kolisi. When he threw his head back, eyes closed, to belt out the closing line, ‘Let us live and strive for freedom in South Africa our land,’ the Ellis Park crowd erupted. The Boks would go on to win the World Cup, but this was as significant a moment as any in Springbok history.