Join Daniel Janse van Rensburg in Cape Town for the launch of his memoir Black Beach: 491 Days in One of Africa’s Most Brutal Prisons (8 Nov)
More about the book! 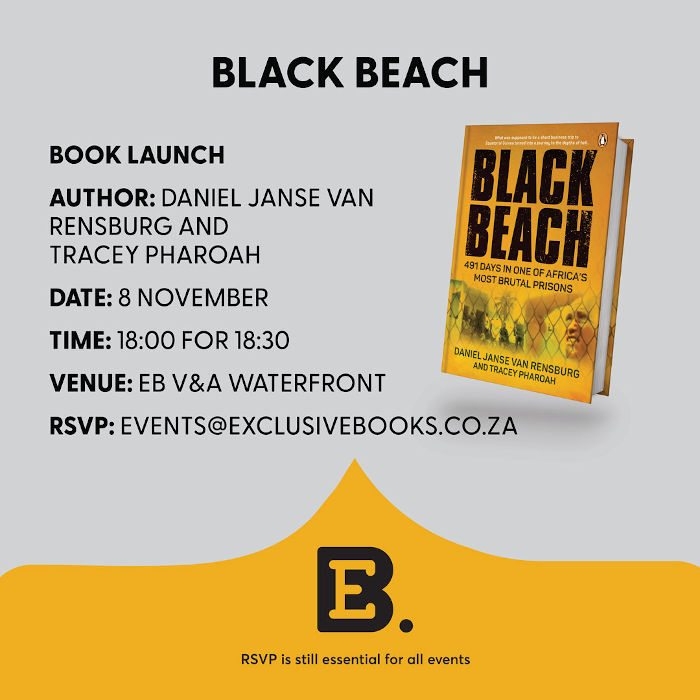 Penguin Random House invites you to the launch of Black Beach: 491 Days in One of Africa’s Most Brutal Prisons by Daniel Janse van Rensburg with Tracey Pharoah.

What was supposed to be a short business trip to Equatorial Guinea turned into a journey to the depths of hell. Black Beach, located on Bioko island off the mainland of Equatorial Guinea, is one of the world’s most feared prisons, notorious for its brutality and inhumane conditions. In 2013, South African businessman Daniel Janse van Rensburg set off to the West African country to finalise a legitimate airline contract with a local politician.

Within days, Janse van Rensburg was arrested by the local Rapid Intervention Force, had his passport confiscated, and was held prisoner without trial in the island’s infamous ‘Guantanamo’ cells, where he witnessed torture for the first time. He was released by the courts but promptly rearrested, and this time taken to Black Beach. What follows is his remarkable story of survival over more than a year, made possible by his unwavering faith and the humanity of a few fellow inmates.

In this thrilling first-person narrative, Janse van Rensburg relives his ordeal and his hope to return to South Africa.

PRHSA and @ExclusiveBooks V&A Waterfront would like to invite you to the launch of 'Black Beach: 491 Days in One of Africa's Most Brutal Prisons' on 8 November at 18:00.

In this thrilling first-person narrative, Daniel relives his ordeal and his hope to return to South Africa. pic.twitter.com/zktKkHXB0k