‘It’s been a really hot summer.’ – Read an excerpt from Dianne Stewart’s new novel Time of the Swallows
More about the book! 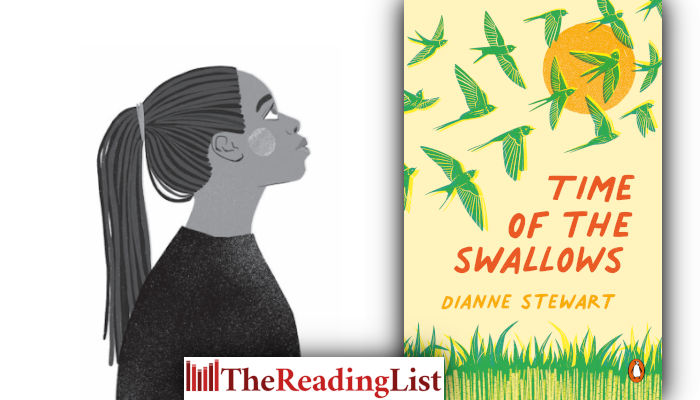 Penguin Random House has shared an excerpt from Time of the Swallows by Dianne Stewart.

Stewart has published a number of Penguin Random House books. They include Wisdom from Africa, a collection of African proverbs; Durban in a Word, which she compiled and edited; and a number of children’s books. These include The Zebra’s Stripes and other African Animal Tales, Folktales from Africa and The Guinea-Fowl’s Spots and other African Bird Tales. She has a BA Hons in African Languages, an MA in South African Literature and an MA in Creative Writing.

Anele Dlamini’s life has been turned upside down.

In this coming-of-age novel set over the course of one summer in KwaZulu-Natal, Anele discovers that life is full of challenges and together with her family learns to adjust to unforeseen circumstances.

Like the swallows’ seasonal visitation, Anele realises that time on earth is short. Little did she know how short it could be.

“Sorry!” Sandile, the hairstylist, lets go of my hair. “I didn’t mean to hurt you.”

Staring in the mirror, I imagine long hair cascading past my shoulders and looking older than fifteen. I hope my parents will soon stop calling me the baby of the family, though my name, Anele, means last-born.

My sister, Jane, perches uncomfortably on a straightbacked chair in Sandile’s Hair Salon, with its cloying smell of chemicals and shampoo. Her large tummy, covered by a tight black top, is like a watermelon. Suddenly, she slides off her seat, straining her denim skirt at the seams, and offers to help Sandile with braiding my hair.

Jane and I are very close. When not working as a supervisor in a factory that supplies handbags to nationwide chain stores, Jane hangs out at home with us. When Brian is travelling for work, and he always seems to be away, Jane often sits on the end of my bed and we talk for hours.

Twisting strands of my hair, Jane smiles at me with her full moon face. Fleshy cheeks have swallowed her strong, well-defined cheekbones and her shiny eyes have almost disappeared. A sideways glance confirms that my elder sister no longer has the lean body of a bushbuck. Even her arms and legs have thickened with this pregnancy. Sometimes her ankles are so swollen at night that she has to sit with her feet up.

Sandile wears a trendy, tight black shift, black Nikes with her smooth black hair styled in a bob, just below her ears. “How much longer?” she asks, adjusting the strap of her black apron, that has slid down her arm.

“What do you mean?” I catch Sandile’s glance in the large mirror, that has black spots around its edges.

“About three weeks,” Jane interjects. “But the doctor thinks my baby might come early.”

Waddling to the back of the salon, Jane quips, “I’m so looking forward to this baby. It’s my first.”

When she sees my smile, Sandile says, “Izingane zasisu sinye zahlukaniselana intethe. You must be looking forward to this baby too, Anele.” Her eyes dance. “Children of the same family usually care for one another.”

Alone with her, Sandile takes advantage of listening ears to complain about the pavement stylists. “Can you believe it, Anele?” A look of disbelief sweeps over her face. “They just sit on crates and show their photo albums to young girls passing by. Then they promise them the looks of Naomi Campbell or Beyoncé.”

“I’ve seen them,” I sigh. “But can they really deliver their looks?”

Sandile smirks while tugging at my hair. “Anything is possible these days! Eish! But there are too many of them in this town.”

When I nod, Sandile says, “Aibo! But my clients don’t like to sit on the street.”

Flustered, Sandile shakes her head vehemently. “Having their hair done with everyone watching! No!”

My sister returns to us with perspiration rolling down her face and arms, despite the rusty overhead salon fan that works overtime, trying to activate the sluggish air in the salon. Sipping a glass of water, Jane returns to her perch and catches the tail end of the conversation. “Can’t imagine Mam Mlambo sitting on the pavement to get her weave,” she comments.

Sandile sucks her teeth. “Those pavement workers don’t even shampoo the client’s hair before adding a weave.” While I’m nodding in agreement, my sister rescues me, continuing the conversation with my hair stylist.

“Everyone has a right to choose where they want to go,” says Jane, boldly. “Those street-braiders have many customers too. And they’re probably much cheaper.”

“But they have no overheads!” snaps Sandile. “They don’t even have to pay a landlord. Do you know what my monthly rental is for this salon?”

Three hours later, with a head boasting boxed braids, Opele-pele, I saunter down the street, admiring my reflection in the store windows displaying the latest fashions. Pavement vendors vie for our attention, offering cell phones, peak caps, handbags and even fruit in this town, KwaDukuza, originally founded by King Shaka in the 1820s.

Intrigued by the clothes, I loiter, but Jane hurries me along. “I’m exhausted,” she says, cradling her stomach bump. At the end of this noisy street, we climb into an almost full taxi that has stopped abruptly at kerbside.

Holding onto the seat as we sweep around the first corner, under the watchful eye of a red robot, we almost collide with a pedestrian scurrying across the tarmac.

“That was close!” Jane yells, as tyres screech, breaks are engaged and we all experience whiplash, muttering under our breath. Disgruntled passengers shout at the driver, who drowns us out with the taxi’s sound system, catering not only for us in the taxi, but street pedestrians as well.

When the driver stops suddenly to pick up a passenger at The Chicken Den, I fall out of the taxi first, then help Jane climb out of the vehicle after me. While supporting her elbow, I can’t help looking at my hair in the taxi’s side mirror.

Flicking the braids off my face, I smile and follow Jane, who shuffles into the restaurant ahead of me, her shoulders pushed far back. “I have to sit, Anel. My back’s aching! Obuhlungu bayo!”

Dragging her feet, Jane finds the last vacant table in the corner of the restaurant. Bending her stiff knees, she eases herself slowly onto the red plastic-covered bench that sticks to her sweaty legs like glue. “Why isn’t this place airconditioned, Anel?”

Jane fans her face with the laminated menu as perspiration flows down her cheeks like a river.

Flipping over the menu, I’m unable to decide on my meal. The menu has changed since I was here last. There are many more options now, and I cannot choose between sticky wings or chicken nuggets with a Thai sauce.

Throwing my hands up in dismay, Jane says, “Thata isikahathi sakho. There’s no rush, Anele.” Jane is far more laid back than I am, and her patience astounds me.

Hungry as a dog on the prowl, I settle for a chicken burger and sloppy fried chips.

“We must not become dehydrated in this humidity,” says Jane, sipping iced water with lemon. “It’s been a really hot summer.”

Bored, I gaze out of the large window with the restaurant brand name, The Chicken Den, posted on the bottom right-hand corner. People are queueing outside at the take-out hatch and I suddenly think I recognise someone I know. “Isn’t that …” My gaze is fixed on a man as he leans over to pick up the young boy who is with him, while chatting to the woman next to him.

“Eish!” My eyes revert uneasily to my sister.

With heart pounding, I look again, craning my neck, but the objects of my gaze have disappeared.

“Just someone I thought I knew, but they’ve disappeared now …”

Our food arrives. Tearing into the soft white roll with my teeth, I notice oil from my sister’s drumstick sliding down her fingers. R and B thuds in the background, and I can still see the queue for take-aways outside that now stretches around the corner.

“So pleased we have a seat,” says Jane.

On the opposite side of the road, brightly coloured beach umbrellas shade more clothing sellers, who flaunt their wares to passers by. Next to them are vendors selling incema reed mats, roots, bulbs and other indigenous medicine.

“Gogo says the izihlambelo herb is good to take when you’re pregnant,” says Jane. “She says it will help the baby move around easily in my stomach. I should try to get some.”

Waiting for the bill, Jane asks, “Are you going to try out for the netball team this year, Anele?” My sister has a way of motivating me.

“The competition’s tough. Only made seconds last year.”

Jane explains that she was a striker in high school. “I even made the KwaZulu-Natal provincial netball team. We went to Pietermaritzburg for the inter-prov, and that’s where I first met Brian.”

When Jane sees she has my attention, she continues. “Our bus stopped at the service station for repairs to its brakes, and I met him in the shop there.”

I have always wondered where Jane met Brian, who is sixteen years older than her. Because he is a clothing representative and travels throughout South Africa, I just assumed that she met him at her place of work.

“Let’s ask Dad to put up a netball ring outside the garage. Then you can practice shooting.”

My eyes light up.

Finishing her meal, Jane grimaces and puts both hands on her stomach. “Anele, feel my stomach here. Our baby’s so active.” As my hand connects with her bulge, I can feel her baby kick.

“Have you named the baby yet, Jane?”

“What does Brian say?”

Jane does not answer me. She gazes at the queue outside and is lost in thought.

“So, will Brian be home for the birth?” I finish the last fried chip on the plate, dipping it into tomato sauce.

My sister glances down at the table. “I’m not sure. Hope so. Depends on his work.”