Indentured: Behind the Scenes at Gupta TV – revealing the true nature of the Zuma-Gupta cabal
More about the book! 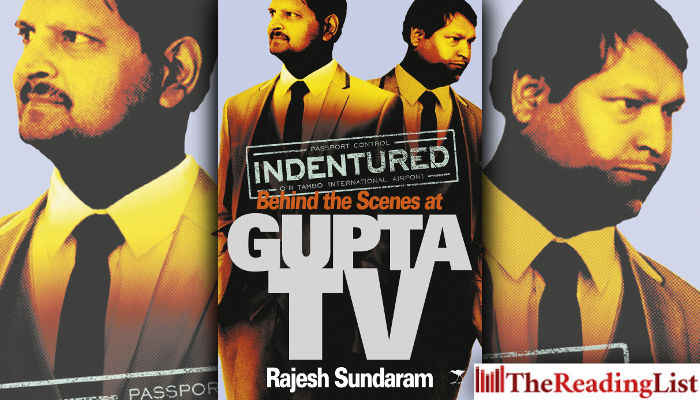 Indentured: Behind the Scenes at Gupta TV is Rajesh Sundaram’s story of launching ANN7, with the power-grabbing and money-hungry mogul Atul Gupta and his cronies breathing down his neck.

‘Why Zuma?’ asked Atul Gupta. ‘We have close relations with everyone in the ANC. If Zuma is ever ousted, I can tell you for sure that the next one in line from the ANC would be close to us as well. We are “Banias”, and we know how to keep our business interests protected,’ Gupta added.

A senior broadcast journalist from India is headhunted to lead the team that’s been tasked to launch the latest privately owned 24-hour television news channel in South Africa.

He is lured with promises of a unique professional challenge where he will have the chance to empower young black reporters to tell the stories of ordinary South Africans; train technicians in using the world’s best news gathering technology and state-of-the-art broadcast systems; and create a world-class product across the African continent.

But soon he will learn how the influential family who had hired him and the highest office in the country are inextricably linked in a bid to create a propaganda tool that will not only advance a clear political agenda, but also position itself to loot state coffers of millions of rand …

The Sunset Honeymoon-Literary fiction on HIV/Aids versus culture

A blessing in disguise? Join Angela Makholwa for the launch of The Blessed Girl at Skoobs

Don’t miss the Joburg and Cape Town launches of Bantu Holomisa: The Gamechanger