‘Great novels force us to think beyond our prejudices and to question where our empathies lie’ – Brent Meersman
More about the book! 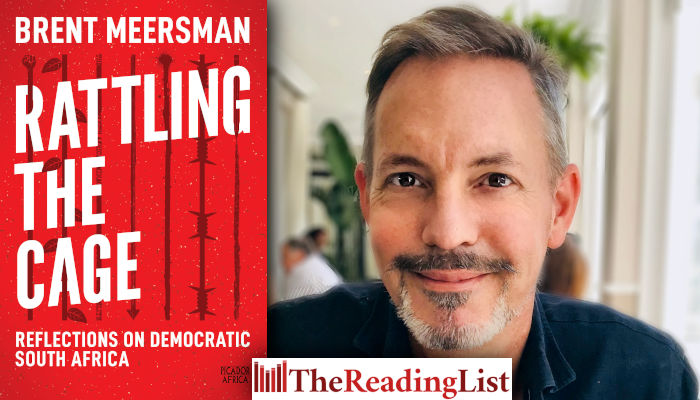 Brent Meersman ruminates on the power of a good novel. Meersman’s new book Rattling the Cage: Reflections On Democratic South Africa is out now from Pan Macmillan SA.

Not to be facetious, but as a novelist I think one of the problems with South African society, its politics and public discourse, is that not enough of us read novels. I’m thinking of great novels, not airplane reads or genre fiction. I mean novels in keeping with The Great Tradition of FR Leavis, and not just Anglo-Saxon or European, but the great African, Indian, Asian, and South American novels.

Although, as a first-year student, I found his tone haughty, Leavis did give me the basis of my literary philosophy, the conviction that novels are the best moral educators of our age. So, I read Jane Austen, George Eliot, Henry James and Joseph Conrad as Leavis prescribed, but also Patrick White, Llosa, Achebe, Proust, Dostoevsky, Kafka et al. Writers who explored the pinkish grey zones of our humanity, where we are all good and bad, hero and villain, victim and perpetrator, ugly yet beautiful; where we do wrong by trying to do good and often do good without having intended it – these were my moral educators. A great novel doesn’t simplify, it stays true to life by keeping as much of life’s complexity and ambiguity as the writer can achieve.

What I want from a novel, like a good theatre play, is an awkward situation. There needs to be a series of moments that take me by surprise, leaving me at a loss as to how to respond emotionally and intellectually at that moment. I must not know whether what is unfolding before me is right or wrong or whether I should laugh or cry. I want to be rendered vulnerable, transported to a place where I have no preconditioned response, the very opposite of being sentimental. And it occurs to me that to sincerely engage with South Africa, which routinely spares us no shortage of awkward situations, requires much more from us than the glib opinions of columnists, the sanctimonious performances of ‘opinionistas’ or the pontifications of the punditocracy – entertainments, which tend to pander to our tastes, reinforce and endlessly repeat what we know we already enjoy, that is to say a place of safe judgments, villains we hate, heroes we worship.

Entertainment is a bit like the delight we take listening to the echoes in a cave or a cathedral after we have clapped our hands. But a great novel on the other hand asks: what do those echoes say about space and time and perception? Such writers lead us outside of our comfort zone, while never quite letting go of our hand. A great novel must be ambitious enough to be worthy of its flaws. (As Leavis observed, while nothing is above criticism, an awful lot of writing is beneath it.)

Novels teach us about the moral complexity of this world, to not be so sure of our judgments of others. Villains and enemies are not so easily judged, nor heroes and friends too easily loved. A good novelist unmasks people who purposefully do dreadful things to others, but she will also show the tragic, unintended effects our behaviour has on those closest to us over time. We realise the terrible consequences of anger and of deceit and folly. The great novelists understand cruelty but believe in redemption. Our hearts will be broken one way or another, since that is the human condition, and that is also the territory of good novels. Interestingly, no matter who the main characters are, great novels usually seem to take the side of their women.

Great novels force us to think beyond our prejudices and to question where our empathies lie. Their lead characters are seldom comfortable inside their society. They are therefore almost always anti-war, and against oppression and hatred. They reveal to us the many sides of any social argument. They don’t bask in the glory of conquests. They mock stubbornness, social rigidity, prejudice and narrow-mindedness. They are never impressed by bling and materialism, or social class and power, but tend to subvert or debunk such delusions.

Our world would therefore be a much poorer place if serious writers disappeared, and they have been disappearing. The difficulty is that so few people buy novels in South Africa these days that a serious writer can barely scrape together a living. Not even the Nobel Prize winners for literature to our nation likes to lay claim – Gordimer, Lessing, Coetzee – would survive very long on their local royalties today. But the situation is far graver than a complaint about paltry remuneration. Without strong literature our culture is shallow.

Our book market is said to be unique: South Africans, unlike in the United States or the United Kingdom for instance, read more non-fiction than fiction, much of it current affairs, which dominates the bestseller lists. The perceived existential threat our torrid politics provides is possibly the reason. People want to know what is going on, someone to try to make sense of the facts, and they want them to predict where we are headed.

As a nation we also excel at definitive biographies of politicians and struggle heroes, painstakingly researched or autobiographical. I do become sceptical however when some of these biographers turn ‘psychological’, using pop-psychology to analyse their subject on a couch in another room. I suspect many of us never get around to reading these thick books, which would explain how public debates often reflect the ignorance that comes with such compartmentalisation. As narrative histories they are instructive. How many of us have read not only the biographies of Tambo, Mandela and Mbeki, but also De Klerk, Winnie Madikizela-Mandela, Zuma and Ramaphosa?

What South Africans do love to consume are the scandals our investigative journalists uncover, and such books top the sales lists, though the titles are short lived. The best read like the plots of thrillers, which our politicians’ stranger-than-fiction shenanigans amply provide. They give us validation that the scoundrels didn’t get away with it now that we at least know the truth about them, there in indelible ink, even as we notice that there have been no legal consequences for the miscreants. The Guptas have flown, Zuma dribbles on, Malema rises – years after they were unmasked.

It is not the job of these books to understand the people in them. Their job is to tell us what their subjects did or did not do, what they got right or wrong in the writer’s opinion. They make judgments and seldom entertain moral ambiguity.

We also have a wealth of surveys of our political and economic landscape, some truly excellent in explaining the mechanics and anatomy of it all. And finally, we have the national self-help books proposing solutions to ‘make South Africa work’. But work for whom?

The problem with reading almost exclusively books that set out with the best of intentions to be ‘non-fiction’ is that we lose much of the essential human dimension. Conjecture and bald facts have no inner life. Historical accounts seldom inhabit the people in it. They might superficially, on the level of the abstract noun, tell us what the author thinks historical actors felt and thought at the time, but if they stray too far along this path then they are rightfully discredited. It is the difference between reading a history of Napoleon’s invasion of Russia and reading Tolstoy’s War and Peace. It is because novels naturally have in their crosshairs the intersection of the individual and society, which is the fulcrum of history.

In our own country I can illustrate with the example of The Long Journey of Poppie Nongena by the late Elsa Joubert, a book spoken about in hushed tones when I was still at school. It was a revelatory work for many readers. In Dickensian tradition it exposed the reality of life in South Africa for a Black woman deported to the Ciskei.

The current lack of interest in novels points to much that could be done better in our country. The education system is not producing a numerate, let alone literate youth. The economic system has produced a society obsessed with gaudy baubles and materialism on the one avaricious end of the spectrum and a vast population on the other end who have little time or energy for pursuits beyond their survivalist strategies. An anti-intellectual national broadcaster, which should be a primary channel for developing our culture, neither values curiosity nor cultivates a love of art, philosophy or literature in public life; it is too busy trying to sell advertising. Worse, we tax books. Someone on the minimum wage in the United Kingdom can afford to buy a standard paperback novel after less than two hours of work. In South Africa, a cashier at a supermarket, for example, would have to labour for nearly two days on the minimum wage to buy a novel.

Some will cry, ‘who needs novels when we have unprecedented, direct access to the most incredible stories from all over the world via podcasts, social media and YouTube?’ Stiff competition to be sure, and perhaps social media is part of the reason that memoirs are in vogue.

In the past, untold stories from people in faraway lands and the marginalised voices from within our own society would have most likely only reached us through the pages of Malraux, Conrad, Hemingway, Greene or Waugh. But blogs and YouTubed testimonies, as fascinating as they are, don’t always make for a neat, aesthetically pleasing story. But a good writer can curate that reality – shape, contrast and develop it, to weave this raw fabric of lived experience into artefact. (Or is that all cultural appropriation now, the new challenge to us novelists?)

For a while, the rise of the golden age of the television series gave me hope we’d found a new cultural form that might supplant the moral work of the novel. Certainly, watching these has filled the time many of us once devoted to reading. These excellent miniseries include superb adaptations of the great novels, such as Bleak House, Middlemarch, Daniel Deronda and War and Peace, and also new inventions with complex antiheroes, moral dilemmas, layered narratives and richly textured storytelling, such as The Wire, Six Feet Under or the German series Heimat. But as excellent as many of these TV series are, they can never supplant the novel as they do not continuously articulate observation and ideas into words.

Writing is how I have always tried to make sense of the world, of the people around me and my country. Not only by writing journalism and non-fiction, because truth is much bigger than that, but through writing and reading fiction as well.

Brent Meersman’s latest book, Rattling The Cage: Reflections on Democratic South Africa (Picador Pan Macmillan), marries current affairs non-fiction with a novelist’s eye in a wide-ranging set of essays covering the economic, political and social transition of the country since 1994, addressing such varied issues as free speech, immigration, Fees Must Fall, state capture and climate change. His memoir, A Childhood Made Up (Tafelberg), was published in 2020.