‘Good luck with your murder …’ Read an excerpt from Amy Heydenrych’s twisty new thriller The Pact
More about the book! 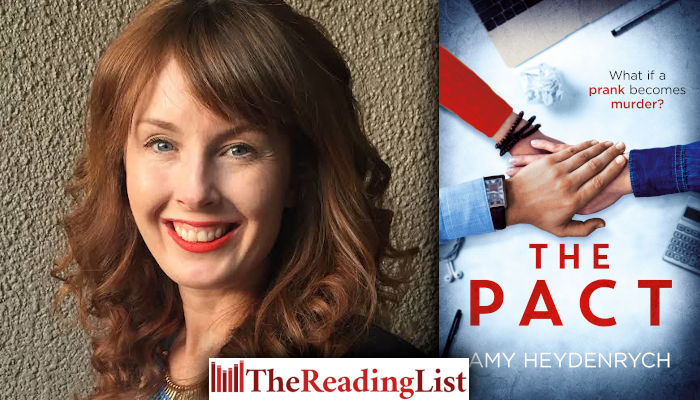 What if a prank becomes murder?

Jonathan Ball Publishers has shared an excerpt from The Pact, the new thriller by Amy Heydenrych.

Heydenrych’s debut novel, Shame on You, was acquired by UK publisher Bonnier Zaffre in a two-book deal and was published in 2018. She has been shortlisted twice for the acclaimed Miles Morland African Writing Scholarship and her short stories and poetry have been published in multiple anthologies including Brittle Paper, The Kalahari Review and the Short Sharp Stories anthologies. In 2018, she was nominated as one of the Mail and Guardian 200 Young South Africans.

It was supposed to be a prank, a stupid mistake that evaporated the next day. She never meant for her to die. Truth be told, she didn’t know exactly what she wanted. She hated herself while she did it and regretted it the second it was done. But later, beneath her begging and protestations, one fact remained: while she never meant for her to die, she did want to hurt her, just a little.

What actually happened on the night Nicole died was vague as a rumour, caught through snippets of conversation behind closed doors. By the time the neighbours had guessed at what was really going on, it was too late.

Who could blame them? It didn’t sound like death at first. A door creaked open. Her musical laugh suggested it was simply a friend stopping by. Nicole was well liked in the building, and always the first to off er a smile. Of course she would have friends over all the time! There were vague sounds – footsteps, clinking cutlery, the low hum of music through speakers. Nothing to cause alarm.

The apartments were packed like sardines, so the neighbours did what they always do. They turned the television up, they spoke a little louder, they put on music of their own. It was the usual competing cacophony that never got too loud or lasted after midnight.

But that night was different. The music got louder – the children in the building were unable to sleep. This was out of character for Nicole and inappropriate for a weeknight. The neighbours below her debated amongst themselves whether it was time to go upstairs and say something. Every sentence of her conversation was shouted, the laughter raucous. Some heard the high-pitched shriek of a woman, others the low growl of a man. The neighbours tried not to focus on it, not to let each word aggravate them further, but it was all they could think about. They should call someone, report it, it was far too loud.

Suddenly, the laughter turned hysterical. It was out-of control, hooting, belly-aching laughter, the kind that rips the breath out of your lungs. A voice. ‘What the hell?’ Then, a dull thud, like the sound of a bowling ball dropping to the ground. Something had shifted. It sounded strange, but not strange enough to investigate. The noise came to an abrupt end and all was silent.

Palpable relief flooded the building. Soon, the neighbours forgot their irritation and the strange end to the evening, and drifted off to sleep, while the killer stepped out and paced past their doorways, while Nicole’s blood spread like a halo around her, while she gasped her last breath.

Isla, the morning after the murder

‘You know what is at the heart of so many suburban murders? Politeness,’ says Isla. She wrestles with her old Ford’s dodgy steering to parallel-park it in front of an apartment building that seems too stylish to be a murder scene. It’s one of those newly gentrified areas in San Francisco where every pedestrian looks ready to be snapped for a street style editorial. Isla barely misses the exposed shins of a hipster in rolled-up distressed denims and a thick, curly beard.

‘Why do you say that?’ says her best friend, Lizzie, on the other end of the phone. In the background she can hear the now-familiar sounds of early evening in London, the roar of motorcycles, the hooting of a bus, the buzz of commuters’ voices. They haven’t lived in the same city for years, but they speak on the phone every day when the time difference allows.

‘Well,’ Isla says, leafing through her notebook while balancing the handset against her ear, ‘in these cases bystanders always say the same thing.

‘Murders just don’t happen in this part of town.’
‘We’re a very peaceful the neighbourhood.’
‘None of us saw this coming. The killer was an upstanding member of the community!’

‘Sure.’ Sarcasm burns fresh on her tongue.

Lizzie laughs down the line. ‘You really are a ray of sunshine when you’ve just woken up.’

If pressed for long enough, each the neighbour can recall something. The night the abusive husband took it too far and the argument ended with smashing glass. The tall, burly men who kept lurking outside the door of the smartly dressed businessman in 12A who was rumoured to have a gambling habit. Or maybe just a bad feeling that can’t be shrugged off.

Isla fiddles with the buttons on the elevator, trying to recall the message that communicated which floor the crime scene is on. ‘Listen, I better go. Good luck with your presentation today!’

‘Good luck with your murder …’

Without the crutch of distraction, a deeper anxiety crawls under Isla’s skin. The alert she received about today’s case made the hair on the back of her neck stand on end. A thirty-one-year-old woman – the exact same age as her – has been found brutally murdered, potentially by someone she knew. The clipped police statement noted no signs of forced entry and the neighbours have insisted they didn’t hear anything other than loud music, animated conversation and laughing. It brings back a memory of her own, a liquor-stumbling, stale-cigarette-kissed scene that she quickly pushes to the back of her mind. She’s safe now, right here, on the other side of the police tape. As a reporter, she has the control to shape the story and take the power back. Yet the past is never too far away. This morning, it is on the other side of that door.