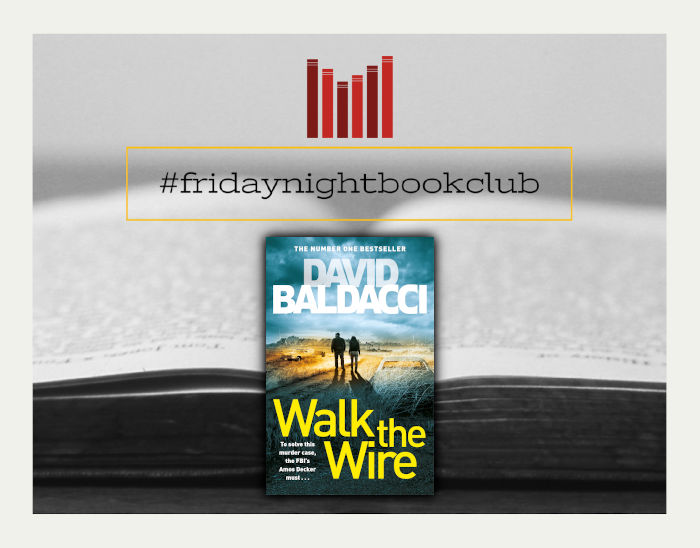 Staying in this evening? That’s still a yes! Get comfortable with a cup of something hot and an excerpt from Walk the Wire by David Baldacci!

Walk the Wire is the sixth book in the Amos Decker series. Once read, never forgotten.

A town with a secret.

A lone hunter discovers the remains of a woman in North Dakota’s Badlands. She appears to have had a postmortem performed on her reminiscent of those only seen on TV shows – but this time, there was no slab, morgue or camera in sight.

A victim without a past.

The reason why Irene Cramer’s death merits an FBI investigation becomes rapidly clear when key questions surface about her mysterious past. Little is known about this school teacher, where she came from or her true identity. She clearly had something to hide.

A hero with a unique skill.

FBI investigator, Amos Decker and his colleague, Alex Jamison, are summoned to seek answers in the local community of London, North Dakota, which sits at the very heart of the fracking industry. Enriched with oil money, jealousy and a deep-set rivalry lie beneath a veneer of glitz and opulence.

Decker soon realises that the nearby ‘eye in the sky’, the Air Force Station, may hold the vital clues and that this town holds secrets so explosive that they could destabilise the entire country …

HAL PARKER WAS RESOLUTELY closing in on his prey, and he felt his blood pressure amp up with every firm step he placed into the dirt. He could tell he was nearing his target by the frequency and volume of blood that had fallen onto the darkened ground, like dulled rubies scattered in the rich soil. He had obviously wounded rather than killed his quarry.

A carcass delivered was part of the deal if he was to earn his fee. He was heartened by the blood loss. It evidenced the inevitable, especially in an unforgiving climate like this.

He moved slowly and methodically forward. Fall was nearly here, but summer was still hanging on, dragging its heat-flamed and moisture-rich knuckles across the stark tundra. Right now, he felt like an egg in a heated skillet. If it were winter, he would be encased in special clothing, and Parker would never, under any circumstances, start to run after his prey. If you ran when it was fifty degrees below zero, your lungs would haemorrhage and you’d drown in your own engorged corpuscles.

Yet when it was this hot and humid, dehydration could kill you just as quickly, and you’d never feel it coming until it was too late.

Parker wore a bright tactical headlamp that literally turned night into day, at least on his narrow path. He figured he might be the only living person within many square miles. Clouds scudded across the sky, all bloated with moisture and surrounded by unsettled air. He was hoping the rain would hold off just long enough for him to finish the job.

He looked to his left, where Canada sat not too far away. Over an hour south was the town of Williston, which was the very centre of the fracking universe here in North Dakota. But the Bakken shale region was so enormous that the land under Parker’s feet held hundreds of millions of barrels of oil along with hundreds of billions of cubic feet of natural gas. Maybe more, he thought, because who the hell could really know the extent of it?

Parker squatted as he assessed his next move.

He gazed ahead, rotating a hundred and eighty degrees on the compass, calculating time and distance based on the size of the blood splotches. He rose and moved forward, picking up his pace slightly. He wore a hydration pack with a large camel bladder and a feed line next to his mouth. His clothing was lightweight, yet sturdy, constructed from self-wicking material. But he was still hot and sweaty at eleven o’clock at night. And each intake of air felt like he was popping habaneros. Mother Nature always had the upper hand over man, he knew, no matter how much fancy equipment they put on.

He wasn’t certain how his quarry, a wolf that had already killed two cows from his employer’s herd, had even gotten away. He’d had a decent sight line on it from about four hundred yards away. The thing had just been sitting there, still as a deer sensing trouble. His rifle round had entered the upper torso, he was sure of that. It had barely moved with the violent impact, so he was sure it had been a kill shot. But when he’d gotten to that spot, it was gone and the blood trail he was now following had commenced.

He cleared a slight rise in the ground. The area he was in was known as the Great Plains, which was somewhat of a misnomer, since the land could be quite hilly. But then the bumpy fringes of the northern Badlands crept up here, like the trickles of river water forming finger coves. But drab buttes and flat grasslands coexisted just fine for the most part. A night fog was sweeping in, eroding his visuals. He frowned, and though he was a veteran at this, he felt his adrenaline spike.

He heard the far-off rumble and then the whistle of a train probably carrying a column of tanker cars loaded with oil, and also with natural gas, which after being pulled out of the earth was then liquified for transport. The whistle sounded sad and hopeful to him at the same time.

Then another rumble came. This time it was from up in the sky. A storm was racing in, as storms often did around here. He had to pick up the pace.

He gripped his Winchester rifle tightly, ready to raise the night scope to his eye in an instant and to deliver, he hoped, the true kill shot this time. The next moment Parker saw something. Fifty feet and to his left. A shadow, a shade darker than its surroundings. He looked down at the ground, shining his light there. Now he was surprised and then puzzled. The bloody marks distinctly went off to the right. How could that be? His quarry hadn’t suddenly developed the ability to fly. Yet maybe it had sharply changed direction up ahead, wobbling on weakened legs before collapsing.

He trudged forward, wary of a trap. He drew within fifteen feet of the spot and stopped. He squatted down again, and under the brilliant beam of his tac light, he took a long look around at the vast space in front of him. He even gave a behind-the-back look just in case his quarry had managed to outflank him and was sneaking up from the rear. Parker had fought in the first Gulf War. He had seen the crazy shit that sometimes took place when living things were trying to kill each other. He wondered if this was one of those times.

Still squatting, he crab-walked forward to within ten feet of the spot. Then five.

He felt his gut tighten. He must be seeing things. He sucked on his water line to increase his hydration. But the thing was still there. It was no mirage. It was …

He gingerly rose and carefully treaded the final few feet to the spot and looked down, his powerful light illuminating every detail of the nightmare he had just discovered.

It was a woman. At least he thought it was. Yes, as he leaned closer, he saw the plump breasts. She was naked, and she had also been butchered. Yet there wasn’t a drop of blood to mar the pristine ground around her.

The skin covering her face had been cut from the back and then pulled down, coming to rest on the exposed bone of her chin. Her skull had been sawed open and the top part removed and laid to the side of her head. The revealed cavity was empty.

Where the hell was her brain?

And her chest. It had been apparently cut open and then sewn back together.

He glanced at the compact dirt around the body. His brow screwed up when he saw the distinct marks on the ground there. They seemed familiar to him. Next moment he forgot about these traces and slowly sank to his knees as it occurred to him where he had seen such suture patterns on a human chest before.

It was called a Y-incision. He had seen it in numerous TV cop shows and movies. It was the proverbial cut-up body on the slab in the morgue, only he wasn’t in a morgue. He was in the middle of expansive, unblemished North Dakota without a coroner or TV show in sight.

A postmortem had been performed on this unfortunate woman.

Hal Parker turned to the side and threw up mostly bile.

The soil was no longer pristine as the skies opened up and the rain began to pour down.