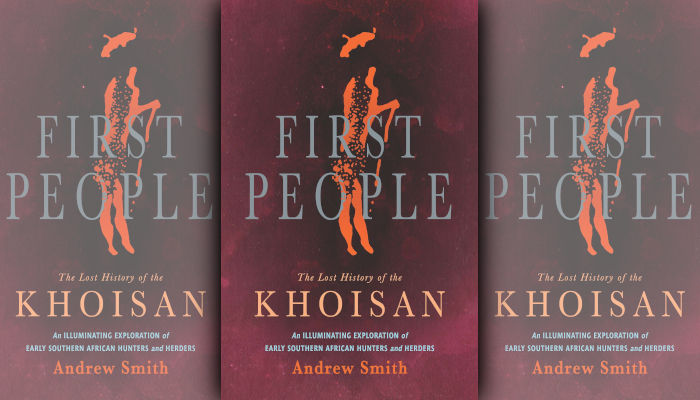 First People: The Lost History of the Khoisan by Andrew Smith is out now from Jonathan Ball Publishers.

Southern Africa’s first people communities are the groups of hunter-gatherers, representing the oldest human lineages in Africa, and herders who migrated from as far as East Africa to settle in what is now Namibia, Botswana and South Africa.

These groups, known today as the Khoisan, are represented by the Bushmen (or San) and the Khoe. In First People, archaeologist Andrew Smith examines what we know about southern Africa’s earliest inhabitants, drawing on evidence from excavations, rock art, the observations of colonial-era travellers, linguistics, the study of the human genome and the latest academic research.

Richly illustrated, First People is an invaluable and accessible work that reaches from the Middle and Later Stone Age to recent times, and explores how the Khoisan were pushed to the margins of history and society. Smith, who is an expert on the history and prehistory of the Khoisan, paints a knowledgeable and fascinating portrait of their land occupation, migration, survival strategies and cultural practices.

Professor Andrew Smith is an archaeologist and researcher who has excavated in the Sahara and Southern Africa, working with Tuareg pastoralists in Mali, the Khoekhoen descendants in South Africa, and the Ju/’hoansi Bushmen in Namibia. He has joined expeditions to Egypt and has done research in Ghana, Mali, and Niger. Professor Smith is an emeritus professor in the Department of Archaeology at the University of Cape Town. He has written and published eight academic books on the subject.