Find out what Marilyn Monroe has in common with the ugliest bird in the world in an excerpt from Cat Among the Pigeons by David Muirhead
More about the book! 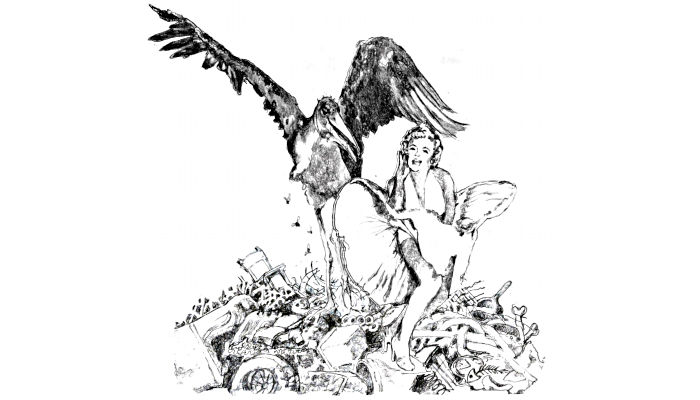 Cat Among the Pigeons, the new book from David Muirhead, is out now from Penguin Random House!

Cat Among the Pigeons is another collection of Muirhead’s unrespectable creatures, following his successful book of hilarious animal stories, The Bedside Ark.

Muirhead’s mix of humour, mythology, anecdotal tales and folklore builds quirky and captivating portraits of each animal, and makes for a lighthearted, funny – as well as illuminating – read.

Most folk think that Marilyn Monroe had nothing in common with the ugliest bird in the world, and they are, of course, right. Except for those feathers. The marabou stork and Ms Monroe shared that cosy little secret. She occasionally wore them to adorn her shoes and, quite probably, her unmentionables, whereas the marabou wears them, or rather grows them, on its tail.

Down feathers from the marabou are a sought-after item in the fashion industry, mainly used to create feather boas, and to add frills to clothing and hats. But this, alas, is as close as the stork gets to the dizzy peaks of haut couture, let alone the social soirées of the beautiful people.

Imagine a cantankerous 90-year-old granddad, a man who had smoked two packs a day from the age of eight and knocked back a case of brandy once a week, and you will start to form a picture of what a marabou stork looks like when it hatches from the egg. From that point on, it’s straight downhill, at least in terms of appearance. Adult birds are bald, blotchy, hunched and have a floppy pink pouch hanging from their throat; throw a tatty black cloak, borrowed from a Victorian undertaker, over their shoulders, clip on a prodigious pterodactyl beak, and, voila, the ensemble is complete.

Not that the birds would give a bat’s entrails what we think. Once upon a long time ago, some of us were lunch as far as they’re concerned. Archaeological digs on the island of Flores have unearthed some evidence that ancestors of the modern marabou, over 2 metres tall and just as ugly, preyed on the miniature proto-human inhabitants. They may even have contributed to the eventual extinction of this little race of Flores hobbits, as they are endearingly if somewhat colloquially known to science.

The modern marabou hasn’t shrunk much, still reaching a height of about 1.5 metres, but modern humans have grown bigger, or at least fatter, largely thanks to our penchant for wolfing down just about every other organism on the planet. We are no longer on the menu, but in sub-Saharan Africa, where marabous now live, they still like to keep a beady eye on us, or more particularly on our vast and ever-expanding rubbish dumps. Scavenging has always been a way of life, but the storks have not previously experienced a bonanza on this scale; the result has been a measurable increase in their numbers, at least in their East African stronghold.

Never in a good mood at the best of times, marabous living in close proximity to human settlements are known to get quite testy if the supply of edible crap dries up. The local inhabitants can expect a lot of belligerent bill clattering and muttered reminders about Flores if they toss out nothing but broken appliances, old mattresses, cracked crockery and other inedible rubbish.

Back in the pristine wild lands, marabous live a more conventional life. They often join vultures, the other baldies of the savanna, sticking their heads into the gory cavities of dead elephants and other deceased creatures. If a large animal dies of natural causes and is still intact when it keels over, marabous have to wait for the vultures to unzip the carcass, but when that’s done, they lord it over all, pushing the smaller birds aside and taking what they want.

But it’s not all about making do with dead stuff. These storks also hunt live creatures of manageable size, and particularly so while raising a brood of chicks. Any caring parent wants what’s best for its young, and marabous are no exception. Adults may be able to swallow week-old carrion and other rotting leftovers loaded with just about every conceivable strain of ghastly bacteria, but the chicks need health food. Small rodents and reptiles, fish, frogs and the young of other birds are all items routinely added to the menu. Around the lakes of East Africa’s Rift Valley, marabous occasionally cause consternation among camera-clicking tourists by preying on young flamingos, an event akin to an ogre slaughtering a dainty princess in the capricious human imagination.

Like other storks, marabous are community breeders, building large nests of sticks lined with grass, and featuring other modest creature comforts, on the top branches of flat-topped acacias and similar suitable trees. The nests are safe from the ground but vulnerable to the wide-open African sky, which is amply loaded with raptors. Having vigilant neighbours helps, but both parents need to share the 30-day incubation process, and then generally take turns to be in attendance for three to four months until the chicks have fledged.

Marabous know where babies come from, or more likely, don’t give it any thought. It’s safe to assume, though, that they don’t subscribe to the belief that the bundles of joy are delivered in pristine napkins by their sissy white stork cousins.