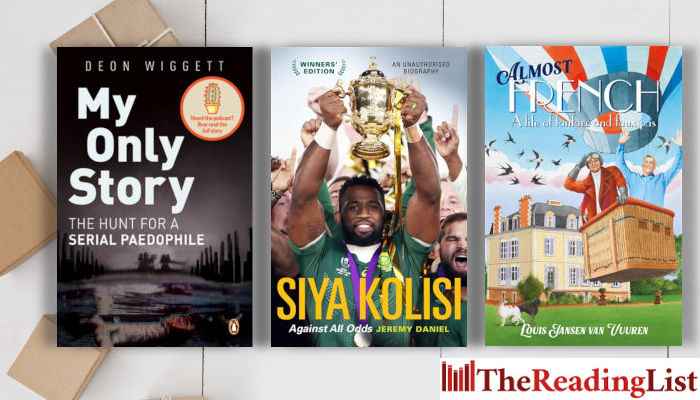 The festive season is a time for giving, and what better gift is there than a book? Have a browse of these recently published biographies and memoirs for inspiration!

From personal memoirs to stories of overcoming great odds, our selection has something for everyone. 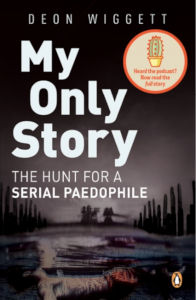 My only story: The hunt for a serial paedophile by Deon Wiggett

In November 2019, Deon Wiggett’s sensational weekly podcasts held South Africa in thrall as he hunted down the paedophile who raped him as a schoolboy. Now, in My Only Story, he completes his exposé of Willem Breytenbach, the once brilliant teacher and later media luminary who led a predatory life.

While investigating men who prey on boys and girls, Deon devises a model that anyone can use to identify paedophiles in their midst. In his own words: ‘It’s pleasant to pretend that men don’t rape children, but once you accept that they do, it becomes surprisingly easy to recognise their trickery. Once you match a universal pattern to a specific man’s profile, you can spot the deceit before it is too late.’

My Only Story is a riveting, thoughtful and often irreverent account of one man’s determination to overcome childhood trauma, to help others face their demons, and to extract some beauty from the boyhood he lost. 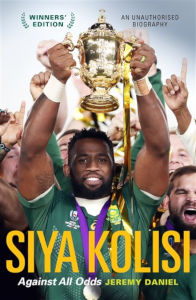 Siya Kolisi: Against All Odds by Jeremy Daniel

This is the new edition of the highly successful unauthorised biography of Springbok Captain Siya Kolisi. It includes all the games at the Rugby World Cup in Japan in 2019, and the tumultuous victory tour around South Africa when the team brought home the cup.

Victory at the Rugby World Cup is the crowning glory of an incredible journey that began on the impoverished streets of Zwide, a township outside Port Elizabeth. As the first black South African to captain a Springbok rugby team, Kolisi’s remarkable story is unique and deserves to be heard.

Author Jeremy Daniel tracks Siya’s journey from his childhood days on the streets of Zwide, through some crucial games in high school, into the Western Province rugby set-up and his fight to become Springbok captain. He goes deep inside the systems that identify junior talent, the characters who shaped his journey and the moments where he showed who he really was. 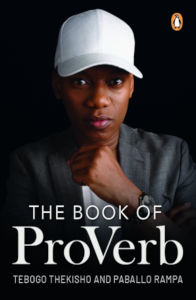 The Book of ProVerb by Tebogo Thekisho and Paballa Rampa

As a teenager he sought music wherever he could find it, and recorded his first demo at age 15, using his mom’s hi-fi. From there, he hustled his way into a multifaceted, award-winning media career in music, radio and TV, crafting a reputation on platforms such as Channel O, Jam Alley and YFM. For over a decade he has been a regular on TV screens as the host of Idols South Africa.

In this memoir, Tebogo pays tribute to the people who’ve helped make him the person he is, especially his parents, his grandmother and his siblings. He shares the lessons he’s learnt through the different phases of his life with infectious positivity, but also gets frank about the dark times he’s endured, including his painfully public divorce and attempted suicide.

The Book of ProVerb is a memoir, a hustle manifesto, and a wholesome guide to life from one of South Africa’s brightest stars. 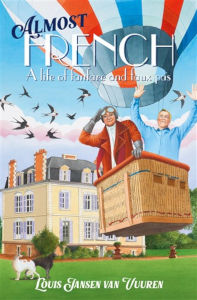 When the artist Louis Jansen van Vuuren first visited Paris he could never have imagined that he would end up owning a château in rural France.

Almost French is the highly entertaining account of his induction over the past 21 years into all things French: snooty waiters, high-brow countesses, numerous faux pas with the French language and of course, several encounters with the infamous French bureaucracy.

Turning the dilapidated château into a boutique hotel with his life partner, Hardy Olivier, required patience and perseverance. Many lessons were learnt the hard way. Four heaters are not enough to heat an entire château and they will blow your power supply.

Louis interweaves the stories about his life in France with fascinating snippets of history, culture and tradition. A must for all Francophiles.

Freedom Writer: My Life and Times by Juby Mayet 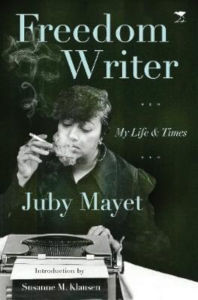 Legendary journalist Juby Mayet, who passed away in 2019, was a force of life.

Her autobiography Freedom Writer: My Life and Times takes us from life as a youngster growing up in Fietas, Johannesburg, through marriage, life as a ‘girl reporter’ for first The Golden City Post, then Drum magazine, and on through apartheid and her resistance to it.

Written in her inimitable style, thumbing a nose always at convention or those in authority, it gives a unique insight into one of the only women writers at Drum – and one who could drink just as hard as Can Themba or Nat Nakasa. 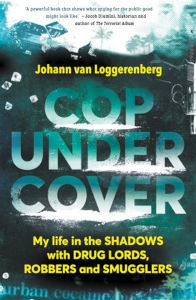 Cop Under Cover: My Life in the Shadows with Drug Lords, Robbers and Smugglers  by Johann van Loggerenberg

In the 1990s deep-cover police agent RS536 took on the Durban underworld as part of a new organised crime intelligence unit. He rubbed shoulders with drug lords, smugglers and corrupt cops, and was instrumental in busting an international drug ring and foiling a bank heist, among many other dangerous engagements.

But then, as the country’s new democracy birthed a struggle between the old and the new guard in the South African Police Service, his identity and his life came under threat.

In this action-packed account, Johann van Loggerenberg describes how, as a young policeman, he worked closely with the investigative team of the Goldstone Commission to uncover the ‘third force’ – apartheid security forces that supplied weapons to the Inkatha Freedom Party to destabilise the country. 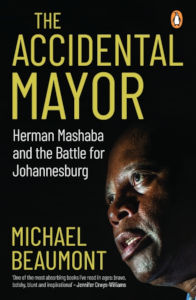 The Accidental Mayor: Herman Mashaba and the Battle for Johannesburg by Michael Beaumont

The Accidental Mayor is a candid insider’s account of Johannesburg’s successful but short-lived coalition government, and provides fascinating and often surprising insights into the workings of the DA, EFF, ANC and other political parties.

The Accidental Mayor details the challenges and achievements of Mashaba’s mayoralty and explains the mechanics of the coalition government.

It also provides a compelling argument about what South Africa needs to succeed in the future. 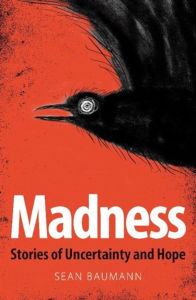 Madness: Stories of uncertainty and hope by Sean Baumann

Sean Baumann spent decades as a psychiatrist at Valkenberg Hospital and, through his personal engagement with patients’ various forms of psychosis, he describes the lived experiences of those who suffer from schizophrenia, depression, bipolar and other disorders.

The stories told are authentic, mysterious and compelling, representing both vivid expressions of minds in turmoil and the struggle to give form and meaning to distress. The author seeks to describe these encounters in a respectful way, believing that careless portrayals of madness cause further suffering and perpetuate the burden of stigma.

Baumann argues cogently for a more inclusive way of making sense of mental health. With sensitivity and empathy, his enquiries into the territories of art, psychology, consciousness, otherness, free will and theories of the self reveal how mental illness raises questions that affect us all. Madness is illustrated by award-winning artist Fiona Moodie. 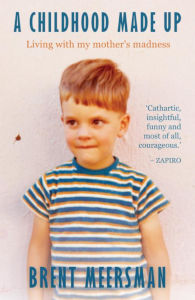 A Childhood Made Up: Living with my mother’s madness by Brent Meersman

I remembered how, when I was a small child supposed to be asleep, my mother would slip into bed behind me and hold me. She would be trembling. She couldn’t hide it no matter how young I was. ‘Go to sleep, go to sleep,’ she’d say, as if that would save us.

Brent Meersman’s poignant memoir of a humble and eccentric upbringing in Cape Town, South Africa, in the 1970s and ’80s reads as a stirring eulogy to his mother, and a vivid snapshot of the times. His adoring mother, a horse-loving artist, received only rudimentary treatment for her schizophrenia; while his father battled a vicious whirlpool of alcohol-fueled depression.

A Childhood Made Up is beautifully observed and filled with wry humour. Delicate yet brutal, this story pays testament to the power of love and the quiet heroism of resilience. 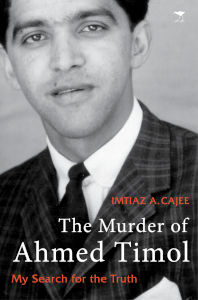 The Murder of Ahmed Timol: My Search for the Truth by Imtiaz A Cajee

27 October 2019 marked the 48th anniversary of the murder of political detainee Ahmed Timol.

‘The passage of 21 years [since the TRC] has led me to this Pretoria courtroom, and to the appearance of this giant man who, 46 years ago, claimed to have been the only eye witness to Uncle Ahmed’s suicide.

‘Joao Rodrigues was the state’s star wit-ness at the 1972 inquest. He would have been deemed pretty perfect for the job of covering up the murder of Uncle Ahmed. A white South African of Portuguese descent, he worked as an administrative clerk at security police headquarters in Pretoria. After more than 10 years of service he had ascended just one step up the police hierarchy, to the rank of sergeant – proof, if nothing else, of his loyalty to the cause and for his role in covering up the murder of Uncle Ahmed.’