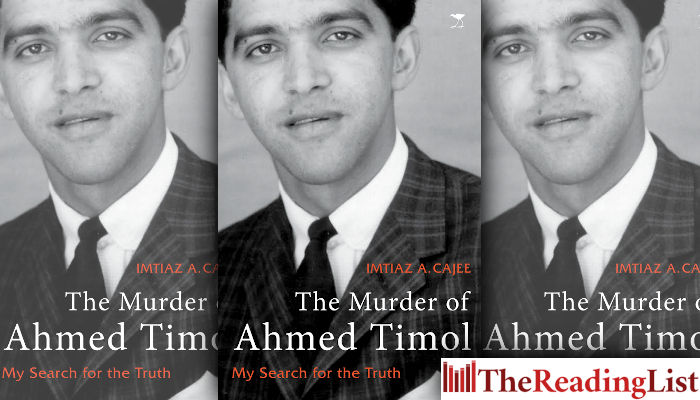 The Murder of Ahmed Timol: My Search for the Truth by Imtiaz A Cajee will be out in March 2020 from Jacana Media.

27 October 2019 marked the 48th anniversary of the murder of political detainee Ahmed Timol.

‘The passage of 21 years [since the TRC] has led me to this Pretoria courtroom, and to the appearance of this giant man who, 46 years ago, claimed to have been the only eye witness to Uncle Ahmed’s suicide.

‘Joao Rodrigues was the state’s star wit-ness at the 1972 inquest. He would have been deemed pretty perfect for the job of covering up the murder of Uncle Ahmed. A white South African of Portuguese descent, he worked as an administrative clerk at security police headquarters in Pretoria. After more than 10 years of service he had ascended just one step up the police hierarchy, to the rank of sergeant – proof, if nothing else, of his loyalty to the cause and for his role in covering up the murder of Uncle Ahmed.’

Only one man remained alive who could tell the truth, a clerk from the police, who was in the room when Timol was pushed. Joao Rodrigues has now been charged with murder and defeating and or obstructing the administration of justice.

The book is a wonderful evocation of a time and places; Johannesburg, London, Mecca, Moscow. The last years of Timol’s life, the woman he loved, and his commitment to a non-racial and free South Africa. His last days are detailed here; the roadblock that was set up to catch him and his treatment by the security police.

Not content with finding his uncle’s murderer, Cajee has been on a quest for justice for other murdered victims of apartheid, whose killers never applied to the TRC and who were never charged, despite the information being available. Cajee investigates the possible deal that was done between the National Party and the ANC during the early 1990s, and asks how it is possible that so many murderers and torturers were not prosecuted. He is adamant that now is the time to find these people and prosecute them.

In order to commemorate Ahmed Timol’s life, a dedicated website, www.ahmedtimol.co.za, was launched in 2012 to keep memories of his contribution to the anti-apartheid movement alive, and to provide a platform for the further exploration of the unsolved case. The website contains a complete record of just about all the information about Timol’s death, and includes the partial inquest records and the historic findings of the 2017 inquest.

The Murder of Ahmed Timol will be published in March 2020. Contact sales@jacana.co.za to place an order.