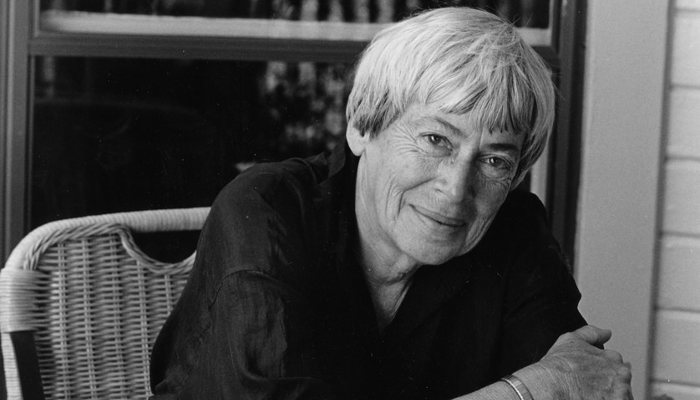 Le Guin passed away at her home in Portland, Oregon. She was 88. Her son, Theo Downes-Le Guin, confirmed her death but did not specify a cause, although the author had been in poor health for some months.

Le Guin is the author of more than 20 novels, as well as children’s books, short stories, poetry, and essays, her most popular work being The Left Hand of Darkness, which won the Hugo and Nebula awards in 1970, and the Earthsea series. With her 1974 novel The Dispossessed she became the first person to win both the Hugo and Nebula Awards for Best Novel twice for the same two books.

During her career Le Guin won the Hugo Award, Nebula Award, Locus Award, and World Fantasy Award, each more than once. In 2014, she was awarded the National Book Foundation Medal for Distinguished Contribution to American Letters.

“It is good to have an end to journey towards; but it is the journey that matters, in the end.”
— The Left Hand of Darkness

Tributes to the author are pouring in on Twitter, from writers such as Neil Gaiman, Stephen King, Hari Kunzru, Rabih Alameddine, Helen Macdonald and Stephen Fry:

I just learned that Ursula K. Le Guin has died. Her words are always with us. Some of them are written on my soul. I miss her as a glorious funny prickly person, & I miss her as the deepest and smartest of the writers, too. Still honoured I got to do this: https://t.co/U4mma5pJMw

Usula K. LeGuin, one of the greats, has passed. Not just a science fiction writer; a literary icon. Godspeed into the galaxy.

Ursula Le Guin spoke to all writers: "The name of our beautiful reward is not profit. Its name is freedom." I was lucky enough to spend an afternoon with her, drinking green tea and asking her questions https://t.co/1YQELvESEk

Sad, sad news. Ursula Le Guin passed away. One of our greats.https://t.co/0wDZVDqF7Z

The world is a smaller darker place without Ursula Le Guin. Huge sorrow at her passing.

Sorry to hear that Ursula Le Guin has died. She was one of the greats. “Words Are My Matter” is my favourite book on the subject of writing itself.