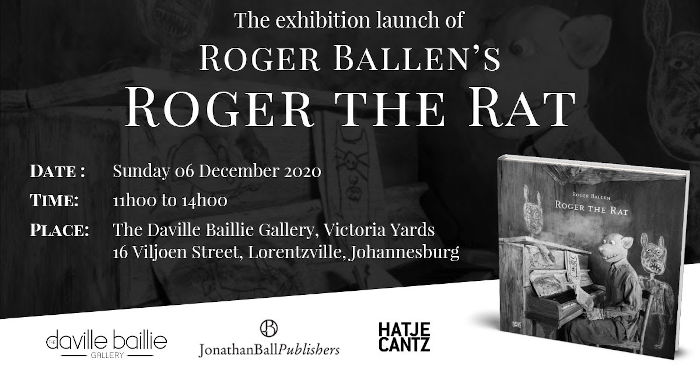 The Daville Baillie Gallery and Jonathan Ball Publishers invite you to the opening of the exhibition Roger the Rat by renowned photographer Roger Ballen.

The event coincides with the publication of Ballen’s new book Roger the Rat.

Born in New York City and living in South Africa since 1982, Ballen is one of the most important and original art photographers working today. He is best known for his probing, often challenging images that exist in a space between painting, drawing, installation, and photography. His universally recognised style is now commonly referred to as a ‘Ballenesque’.

A selection of images from the artist’s series Roger the Rat will be exhibited until February 2021. The opening event, to coincide with the First Sundays gatherings at Victoria Yards, will include a launch of the book published by Hatje Cantz (Germany) and distributed by Jonathan Ball in South Africa.

Released in the Year of the Rat, the photographic series and book Roger the Rat is surreal, refined and disturbing.

Roger Ballen has made a name for himself with his special eye for what is usually considered minor or outside, yet is nevertheless profound and touching. In his hands, the documentary power of the camera merges with the ingenious power of his imagination to peer into the soul and get under the viewer’s skin.

Elaborately produced between 2015 and 2020, his new project is fresh and, amazingly, alive with pop art elements.

In impressive, sharp black-and-white shots, he follows the life of a creature whose body appears human, but who has the head of a rat. We witness absurd scenes that, deconstructed and wrested from everyday gestures, reveal the suppressed aspects of human existence.

5 reasons to read The Wren Hunt, the thrilling new book by Mary Watson