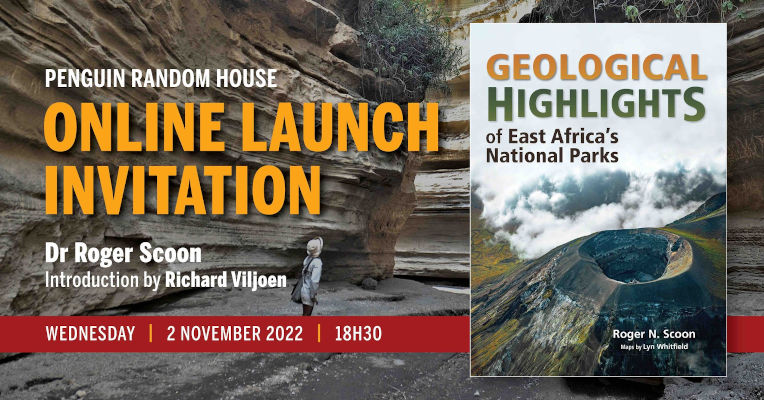 Join Penguin Random House for an online book launch and visual presentation by Dr Roger Scoon, with an introduction by Dr Richard Viljoen.

Scoon is the author of the new book Geological Highlights of East African National Parks.

The national parks and reserves of East Africa are widely known for their rich and abundant wildlife. This book presents a new and exciting angle – the geological highlights of the region’s intriguing landscape.

East Africa’s cataclysmic volcanic legacy, caused by rifting of the landmass, has resulted in a rich source of geological wonders. These range from the seemingly endless, peaceful plains of the Serengeti to the stark skyscraper walls of extinct calderas and the belching vents of the Nyiragongo Volcano.

This handy guide escorts users around all the major – and some minor – parks of Kenya, Tanzania and Uganda, and the Virunga Mountains along the border of Rwanda and the Democratic Republic of the Congo.

Descriptions of each park and its wildlife, both fauna and flora, preface discussion of the geological origins, influences and current conditions. Key geosites in the parks, and how to access them, are indicated. Maps, satellite images and diagrams, along with vivid photography, help explain the dramatic landforms.

For anyone planning a safari to the legendary East African game parks and reserves, this book adds an exciting new dimension.

Dr Roger Scoon is a Senior Researcher at Rhodes University, author, and internationally recognised authority on the geology of the Bushveld Complex, South Africa. He has published scientific articles in local and international journals and led field trips for international conferences to the Bushveld Complex and northern Tanzania. His interest in the influence of geology on national parks and historical sites has resulted in the publication of this, his second book on geotravel. He is a Fellow of the Geological Society of South Africa, the Society of Economic Geologists, and the Geological Society of London.

Dr Richard Viljoen is a graduate of Wits University. During his doctoral studies in the Barberton area, he and his twin brother, Morris, discovered and described an important new class of volcanic rock called Komatiite. After 30 years in the mining industry, he took up a post at Wits in 1998 and later, in 2008, co-founded VM Investments, which now includes two AIM listed companies, Bushveld Minerals and Afritin. He is currently heavily involved in the promotion of Geoheritage and Geotourism particularly in southern Africa.

Join Dr Emmanuel Taban for a book signing to celebrate the publication of The Boy Who Never Gave Up: A Refugee’s Epic Journey to Triumph (10 Apr)

Don’t miss the launch of Future Tense: Reflections on My Troubled Land by Tony Leon at Exclusive Books Ballito (21 Apr)