New book alert! All Rise: Resistance and Rebellion in South Africa – A Graphic History
More about the book! 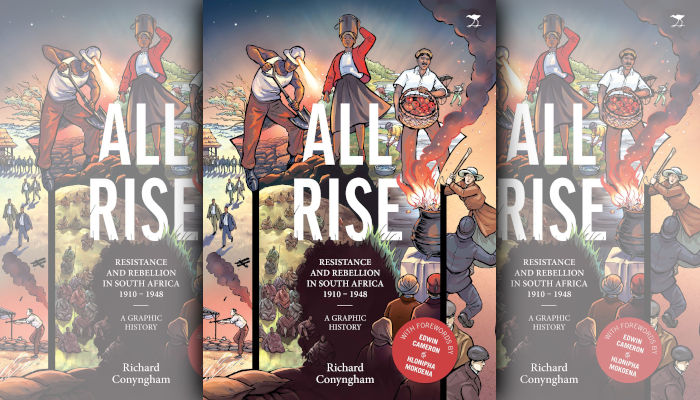 ‘All Rise is a giant step for South African comics: an inspired mix of archival sleuthing and graphic vision. Conyngham and his all-star team of artists have dug up a hoard of resistance history, and brought it to glittering life.’ – Carlos Amato, Mail & Guardian

The book revives six true stories of resistance by marginalised South Africans against the country’s colonial government in the years leading up to apartheid.

In six parts – each of which is illustrated by a different South African artist – All Rise shares the long-forgotten struggles of ordinary, working-class women and men who defended the disempowered during a tumultuous period in South African history.

From immigrants and miners to tram workers and washerwomen, the everyday people in these stories bore the brunt of oppression and in some cases risked their lives to bring about positive change for future generations.

This graphic anthology breathes new life into a history dominated by icons, and promises to inspire all readers to become everyday activists and allies. The diverse creative team behind All Rise, from an array of races, genders, and backgrounds, is a testament to the multicultural South Africa dreamed of by the heroes in these stories – true stories of grit, compassion, and hope, now being told for the first time in print.

With forewords by Edwin Cameron and Hlonipha Mokoena.

Author Richard Conyngham will be in conversation with artists André Trantraal and Mark Modimola.

The contributors will reflect on their creative processes, the enduring significance of the stories they’ve told, and the book’s overarching purpose: to attract a diverse, atypical readership while shaking up the way that history is traditionally revived.

Richard Conyngham is the author of All Rise. He is a writer, researcher and designer originally from KwaZulu-Natal but currently living in Mexico City. He has an honours degree from the University of Cape Town (UCT) and an MPhil in English Literature from Cambridge University. Richard has worked for civil-society organisations Equal Education, Ndifuna Ukwazi and the Social Justice Coalition; the London publisher and literary quarterly Slightly Foxed; and the educational technology companies Hubble Studios and MakeTomorrow. In 2016, collaborating with the Trantraal Brothers, he wrote the book Safety, Justice and People’s Power, an illustrated companion to the O’Regan-Pikoli Commission of Inquiry into policing in Khayelitsha. In the same year, he began researching and writing All Rise.