The shadows hide a deadly story … Find out more about 1979 – the new book from Val McDermid, the Queen of Crime
More about the book! 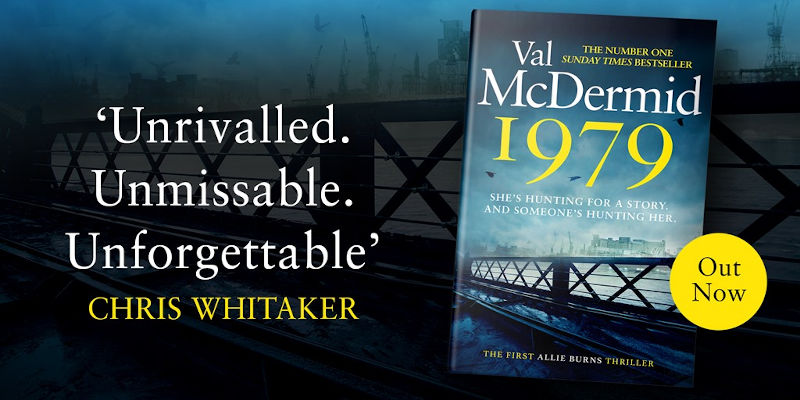 1979 – the atmospheric, heart-pounding first novel in a gripping new series by the Queen of Crime Val McDermid.

‘Val McDermid is the absolute QUEEN. It’s great that this is the first of a new series. Allie is a fabulous character, I’ll go wherever she takes me and I’m dying to see what she does next.’ – Marian Keyes

‘A fast-paced triple whammy of a thriller, with all three plots, each credible, running simultaneously. It uses all the crime-writing skills she has honed over the years, and adds something else – a pin-sharp portrait of tabloid journalism in its messy, misogynistic 1970s heyday. Allie Burns is off to a flying start, and well worth following down the decades.’ – The Scotsman

She’s hunting for a killer story …

1979. It is the winter of discontent, and reporter Allie Burns is chasing her first big scoop. There are few women in the newsroom and she needs something explosive for the boys’ club to take her seriously.

When she discovers a home-grown terrorist threat, Allie comes up with a plan to infiltrate the group and make her name. But she’s a woman in a man’s world … and putting a foot wrong could be fatal.

Val McDermid is a celebrated and bestselling Scottish crime writer, whose novels have been translated into 40 languages, and have sold over 17 million copies. She is best known for a series of suspense novels The Wire in the Blood, which have been adapted for television. She has won many awards internationally, including the CWA Gold Dagger for best crime novel of the year and the LA Times Book of the Year Award. She was inducted into the ITV3 Crime Thriller Awards Hall of Fame in 2009, was the recipient of the CWA Cartier Diamond Dagger in 2010 and received the Lambda Literary Foundation Pioneer Award in 2011. In 2016, Val received the Outstanding Contribution to Crime Fiction Award at the Theakston Old Peculier Crime Writing Festival and in 2017 received the DIVA Literary Prize for Crime, and was elected a Fellow of both the Royal Society of Literature and the Royal Society of Edinburgh. Val has served as a judge for the Women’s Prize for Fiction and the Man Booker Prize, and was Chair of the Wellcome Book Prize in 2017. She is the recipient of six honorary doctorates, is an Honorary Fellow of St Hilda’s College, Oxford and a Professor at the University of Otago in New Zealand. She writes full time and divides her time between Edinburgh and East Neuk of Fife.