A Table Full of Strangers: Read the first chapter of Michael Ondaatje’s new novel Warlight
More about the book! 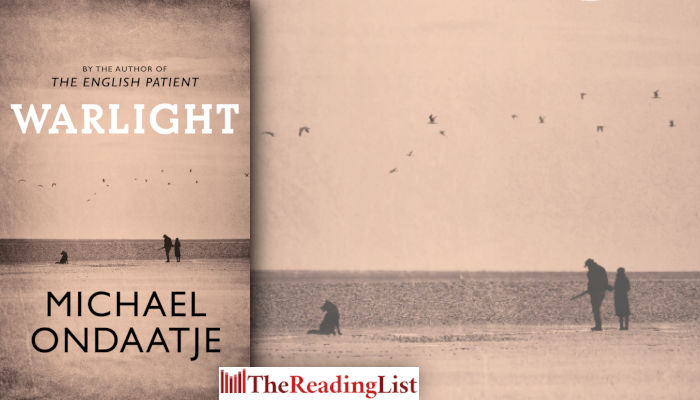 A mesmerising new novel from Michael Ondaatje, the internationally acclaimed, bestselling author of The English Patient, Warlight is a novel of violence and love, intrigue and desire.

Set in 1945, when London is still reeling from the Blitz and years of war. 14-year-old Nathaniel and his sister, Rachel, are apparently abandoned by their parents, left in the care of an enigmatic figure. A dozen years later, Nathaniel begins to uncover all he didn’t know or understand in that time.

A Table Full of Strangers

In 1945 our parents went away and left us in the care of two men who may have been criminals. We were living on a street in London called Ruvigny Gardens, and one morning either our mother or our father suggested that after breakfast the family have a talk, and they told us that they would be leaving us and going to Singapore for a year. Not too long, they said, but it would not be a brief trip either. We would of course be well cared for in their absence. I remember our father was sitting on one of those uncomfortable iron garden chairs as he broke the news, while our mother, in a summer dress just behind his shoulder, watched how we responded. After a while she took my sister Rachel’s hand and held it against her waist, as if she could give it warmth.

Neither Rachel nor I said a word. We stared at our father, who was expanding on the details of their flight on the new Avro Tudor I, a descendant of the Lancaster bomber, which could cruise at more than three hundred miles an hour. They would have to land and change planes at least twice before arriving at their destination. He explained he had been promoted to take over the Unilever office in Asia, a step up in his career. It would be good for us all. He spoke seriously and our mother turned away at some point to look at her August garden. After my father had finished talking, seeing that I was confused, she came over to me and ran her fingers like a comb through my hair.

I was fourteen at the time, and Rachel nearly sixteen, and they told us we would be looked after in the holidays by a guardian, as our mother called him. They referred to him as a colleague. We had already met him—we used to call him “The Moth,” a name we had invented. Ours was a family with a habit for nicknames, which meant it was also a family of disguises. Rachel had already told me she suspected he worked as a criminal.

The arrangement appeared strange, but life still was haphazard and confusing during that period after the war; so what had been suggested did not feel unusual. We accepted the decision, as children do, and The Moth, who had recently become our third-floor lodger, a humble man, large but moth-like in his shy movements, was to be the solution. Our parents must have assumed he was reliable. As to whether The Moth’s criminality was evident to them, we were not sure.

I suppose there had once been an attempt to make us a tightly knit family. Now and then my father let me accompany him to the Unilever offices, which were deserted during weekends and bank holidays, and while he was busy I’d wander through what seemed an abandoned world on the twelfth floor of the building. I discovered all the office drawers were locked. There was nothing in the wastepaper baskets, no pictures on the walls, although one wall in his office held a large relief map depicting the company’s foreign locations: Mombasa, the Cocos Islands, Indonesia. And nearer to home, Trieste, Heliopolis, Benghazi, Alexandria, cities that cordoned off the Mediterranean, locations I assumed were under my father’s authority. Here was where they booked holds on the hundreds of ships that travelled back and forth to the East. The lights on the map that identified those cities and ports were unlit during the weekends, in darkness much like those far outposts.

At the last moment it was decided our mother would remain behind for the final weeks of the summer to oversee the arrangements for the lodger’s care over us, and ready us for our new boarding schools. On the Saturday before he flew alone towards that distant world, I accompanied my father once more to the office near Curzon Street. He had suggested a long walk, since, he said, for the next few days his body would be humbled on a plane. So we caught a bus to the Natural History Museum, then walked up through Hyde Park into Mayfair. He was unusually eager and cheerful, singing the lines Homespun collars, homespun hearts, Wear to rags in foreign parts, repeating them again and again, almost jauntily, as if this was an essential rule. What did it mean? I wondered. I remember we needed several keys to get into the building where the office he worked in took up that whole top floor. I stood in front of the large map, still unlit, memorising the cities that he would fly over during the next few nights. Even then I loved maps. He came up behind me and switched on the lights so the mountains on the relief map cast shadows, though now it was not the lights I noticed so much as the harbours lit up in pale blue, as well as the great stretches of unlit earth. It was no longer a fully revealed perspective, and I suspect that Rachel and I must have watched our parents’ marriage with a similar flawed awareness. They had rarely spoken to us about their lives. We were used to partial stories. Our father had been involved in the last stages of the earlier war, and I don’t think he felt he really belonged to us.

As for their departure, it was accepted that she had to go with him: there was no way, we thought, that she could exist apart from him—she was his wife. There would be less calamity, less collapse of the family if we were left behind as opposed to her remaining in Ruvigny Gardens to look after us. And as they explained, we could not suddenly leave the schools into which we had been admitted with so much difficulty. Before his departure we all embraced our father in a huddle, The Moth having tactfully disappeared for the weekend.

So we began a new life. I did not quite believe it then. And I am still uncertain whether the period that followed disfigured or energised my life. I was to lose the pattern and restraint of family habits during that time, and as a result, later on, there would be a hesitancy in me, as if I had too quickly exhausted my freedoms. In any case, I am now at an age where I can talk about it, of how we grew up protected by the arms of strangers. And it is like clarifying a fable, about our parents, about Rachel and myself, and The Moth, as well as the others who joined us later. I suppose there are traditions and tropes in stories like this. Someone is given a test to carry out. No one knows who the truth bearer is. People are not who or where we think they are. And there is someone who watches from an unknown location. I remember how my mother loved to speak of those ambivalent tasks given to loyal knights in Arthurian legends, and how she told those stories to us, sometimes setting them in a specific small village in the Balkans or in Italy, which she claimed she had been to and found for us on a map.

Experimental fiction and toxic relationships: Chwayita Ngamlana explains the inspiration for her debut novel If I Stay Right Here

Win a copy of the ‘ingenious and thrilling’ new John le Carré novel!