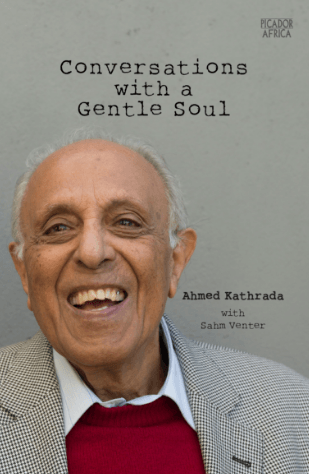 Seeing himself as an ordinary member of the ANC, Kathrada had always been reluctant to comment on domestic politics. Then, on 31 March 2016, the Constitutional Court ruled that Zuma had failed to uphold‚ defend and respect the Constitution, in relation to his refusal to comply with a Public Protector’s report ordering him to pay back the money spent on Nkandla. It was then that Kathrada decided to commit his thoughts to paper.

The result was an open letter that spread like wildfire around the country, calling for Zuma to resign.

Just recently, former president Kgalema Motlanthe received a standing ovation when he read from the letter at Kathrada’s funeral.

The letter is reproduced in full in Conversations with a Gentle Soul.

Read the letter in full:

I have agonised for a while before writing this letter to you.

I am just a rank-and-file member of my ANC branch. However‚ even before the ANC opened its membership to non-Africans in 1969‚ I was involved in the activities of the ANC‚ the South African Indian Congress‚ the SACP and Umkhonto weSizwe.

In the Defiance Campaign Trial of 1952, I was among the 20 accused who were sentenced to nine months’ imprisonment‚ suspended for two years;

In the 1963-1964 Rivonia Trial I was among the eight accused sentenced to life imprisonment. Together with comrade Walter Sisulu and others‚ I was released in 1989. Comrade Madiba was released about four months later.

I am immensely grateful to the ANC for the privilege of serving on the first national executive committee after its unbanning. In 1997‚ I stepped down. I also benefited from the experience of serving for one term as parliamentary counsellor to President Mandela.

I am of course aware that this does not automatically bestow on me the right to address this letter.

However‚ in all these years it never occurred to me that the time would come when I would feel obliged to express my concerns to the Honourable President. It is painful for me to write this letter to you. I have been a loyal and disciplined member of the ANC and broader Congress movement since the 1940s.

I have always maintained a position of not speaking out publicly about any differences I may harbour against my leaders and my organisation‚ the ANC. Today I have decided to break with that tradition.

The position of president is one that must at all times unite this country behind a vision and programme that seeks to make tomorrow a better day than today for all South Africans.

I did not speak out against Nkandla although I thought it wrong to have spent public money for any president’s private comfort. I did not speak out‚ though I felt it grossly insulting when my president is called a “thief” or a “rapist”; or when he is accused of being “under the influence of the Guptas”. I believed that the NEC would have dealt with this as the collective leadership of the ANC.

When I learnt of the dismissal of Minister Nene and the speculated reasons for this‚ I became very worried. I’m fully aware the appointment and dismissal of ministers is the prerogative of the president. This might be technically correct‚ but in my view it is against the best traditions of our movement.

My concern was amplified when it emerged that the deputy finance minister reported that he was offered the finance minister post by members of the Gupta family. The resultant crisis the country was plunged into indicated that the removal of the minister was not about the interests of the people.

The unanimous ruling of the Constitutional Court on Nkandla has placed me in an introspective mode and I had to ask myself some very serious and difficult questions.

Now that the court has found that the president failed to uphold‚ defend and respect the Constitution as the supreme law‚ how should I relate to my president? If we are to continue to be guided by growing public opinion and the need to do the right thing‚ would he not seriously consider stepping down?

I am not a political analyst‚ but I am now driven to ask: “Dear Comrade President‚ don’t you think your continued stay as president will only serve to deepen the crisis of confidence in the government of the country?”

And bluntly‚ if not arrogantly‚ in the face of such persistently widespread criticism‚ condemnation and demand‚ is it asking too much to express the hope that you will choose the correct way that is gaining momentum‚ to consider stepping down? If not‚ Comrade President‚ are you aware that your outstanding contribution to the liberation struggle stands to be severely tarnished if the remainder of your term as president continues to be dogged by crises and a growing public loss of confidence in the ANC and government as a whole?

I know that if I were in the president’s shoes‚ I would step down with immediate effect.

I believe that is what would help the country to find its way out of a path that it never imagined it would be on‚ but one that it must move out of soon.

To paraphrase the famous MK slogan of the time‚ there comes a time in the life of every nation when it must choose to submit or fight.

Today I appeal to our president to submit to the will of the people and resign.

More about the book:

Without much fanfare Ahmed Kathrada worked alongside Nelson Mandela, Walter Sisulu and other giants in the struggle to end racial discrimination in South Africa. He faced house arrest and many court trials related to his activism until, finally, a trial for sabotage saw him sentenced to life imprisonment alongside Mandela and six others.

Conversations with a Gentle Soul has its origins in a series of discussions between Kathrada and Sahm Venter about his opinions, encounters and experiences. Throughout his life, Kathrada has refused to hang on to negative emotions such as hatred and bitterness. Instead, he radiates contentment and the openness of a man at peace with himself. His wisdom is packaged within layers of optimism, mischievousness and humour, and he provides insights that are of value to all South Africans.