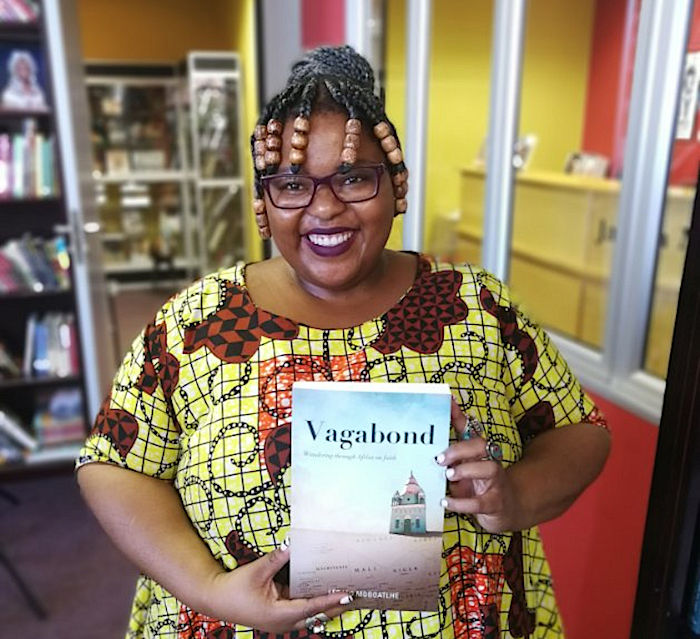 Vagabond: Wandering Through Africa on Faith by Lerato Mogoatlhe is out from BlackBird Books in April 2019!

‘Sometime in November 2007 while working as an entertainment and lifestyle journalist, a job that had seen me party and hang out with local and international stars, including John Legend, I realised that I was over my life in South Africa. My job was fab and my life should have been great but it wasn’t because who cares if you get to pose with Beyoncé? I had had enough of writing about people living their wildest dreams. It was time to see what the story of my life would be. I had always had wanderlust, especially for Africa. And so I made the decision to leave South Africa, an urgent need that consumed me and almost drove me to a point of insanity. I planned to spend three months in Senegal, Mali, Burkina Faso, Ghana, Ivory Coast, Togo and Benin.’

Here's @MadamAfrika holding her book for the very first time… She says she responds to Ms Mogoatlhe now…. Happy publication day. IN STORES FROM NEXT WEEK…. pic.twitter.com/sILTppO8Jv

When Lerato Mogoatlhe left South Africa for a planned three-month break to West Africa little did she know that those three months would turn into five years.

Vagabond is her hilarious and honest account of her five years of living as a drifter in Africa. In between the borders, foreign architecture and interesting new ways of life, Mogoatlhe found passion, love, laughter and heartbreak.

On these pages you will find capsules of time spent in 21 countries in five regions of Africa. You will be regaled by the tales of how she tries to worm herself into hotels when she has no money because of unpaid invoices back home.

You will be mortified and proud of how she navigates herself out of difficult situations like being misread by a man who tries to force himself on her.

Mogoatlhe’s book is a travel memoir driven by the belief that whatever else Africa is, it is first and foremost a home. It is punctuated with a deep urge to know the continent differently.

Lerato Mogoatlhe is a journalist who worked for eight years at publications that include Sunday Times, City Press, DRUM, True Love and Cosmopolitan. She has written for Mail & Guardian, Marie Claire, Hercules Spain and Sunday Independent. She has also worked extensively in digital marketing.