The Friday Night Book Club: ‘The streets of Joburg are paved with gold, but they will have to dig deep to get close to it’ – Read an excerpt from Sue Nyathi’s The Gold Diggers
More about the book! 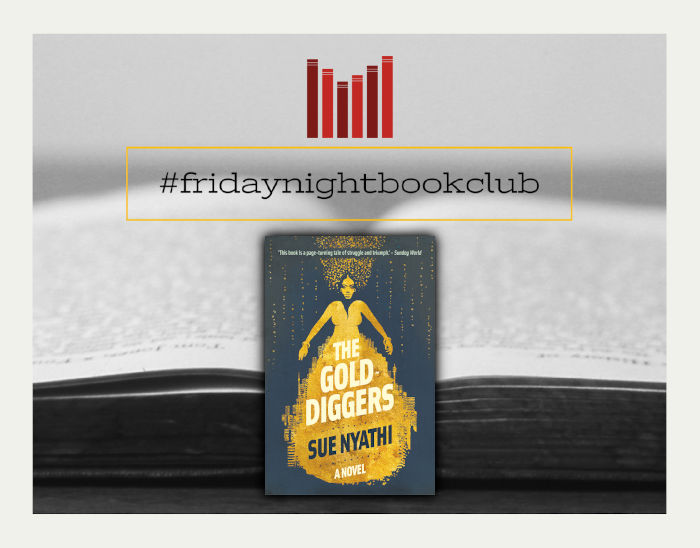 Staying in this evening? Get comfortable with a glass of wine and The Gold Diggers, the much-anticipated second novel from Sue Nyathi.

The Gold Diggers is a novel told with brave honesty and bold description. Out now in stores!

Sue Nyathi was born in Bulawayo, Zimbabwe, and raised and educated there. She has a Master’s Degree in Finance and worked for over five years as a research associate for an economic and strategic planning consulting firm in Johannesburg, where she currently resides. The Polygamist, her debut novel, was published in 2012.

It’s 2008 and the height of Zimbabwe’s economic demise. A group of passengers is huddled in a Toyota Quantum about to embark on a treacherous expedition to the City of Gold. Among them is Gugulethu, who is hoping to be reconciled with her mother; Dumisani, an ambitious young man who believes he will strike it rich, Chamunorwa and Chenai, twins running from their troubled past; and Portia and Nkosi, a mother and son desperate to be reunited with a husband and father they see once a year.

They have paid a high price for the dangerous passage to what they believe is a better life; an escape from the vicious vagaries of their present life in Bulawayo. In their minds, the streets of Johannesburg are paved with gold but they will have to dig deep to get close to any gold, dirtying themselves in the process.

Told with brave honesty and bold description, the stories of the individual immigrants are simultaneously heartbreaking and heart-warming.

The journey south began on Leopold Takawira Avenue, named for a liberation struggle hero who met his demise in the seventies. Some still referred to it as Selbourne, its former name that celebrated a lord from another era. Even when mothers threatened their kids with a hiding they would hiss between gritted teeth, ‘Uzaqonda nta njengo Solobhoni.’ I’ll straighten you out like Selbourne.

The road was wide and welcoming, lined with jacaranda trees that formed a canopy of shade from the merciless heat in summer. When the jacarandas flowered, they painted the city’s skyline with hues of lilac, purple and lavender. Leopold was the main artery from the city, which led to the eastern suburbs. It cut through the heart of Centenary Park and nestled on the grounds of the park was the Natural History Museum of Zimbabwe. However, this is not what the park was renowned for; rather it used to be a popular venue for newlyweds to pose for photographs. Cameramen lived off bridal parties that would descend on the park on Saturdays in noisy convoys spilling out of cars in all their splendour and finery. The park, with its blooming flowers and beautifully landscaped gardens, was the ideal background for the nuptials being celebrated weekend after weekend. Couples would wrap themselves around the trunks of trees whilst the ebullient moment was captured on a Kodak camera.

Melusi recalled with fondness how he used to court girlfriends of the past in that park. They would take long leisurely walks, hands entwined. Then they would pause to buy ice cream from either the Dairibord or Lyons Maid vendor. When exhaustion took over they would sit on the lawn under the shade of a cypress tree. He almost blushed at the memory of how, like many lovers in the park, they would kiss and caress unabashedly; bodies rolling over the lush green lawn.

Except the green was gone now, replaced by long overgrown grass. Even the locomotive train that chugged through the park had gone off the rails. The park was now littered with dirt and debris. A few perennials still bloomed but for the most part they were a rare sight. The park had lost its former appeal and was now a refuge for beggars and vagrants. A walk through the park could get you raped or mugged. Even the Anniversary Fountain, which had sprayed out jets of water, had dried up like the rest of the city. Melusi was filled with more angst and turned his eyes back on to the road.

Leopold Takawira cut through the heart of Suburbs, a quintessential neighbourhood with palatial homes whose architecture was reminiscent of the city’s colonial past. It was the first suburb of Bulawayo and was ironically named that too as if the City Fathers had lacked creativity. Melusi came to a jarring halt at the intersection of Townsend Road almost trampling the population of schoolboys in blue shirts who were waiting to cross the road. At this point, Leopold Takawira Avenue changed identity and became Old Gwanda Road. They traversed through Khumalo, another suburb for the rich and uppity.

When things were good, the residents here shopped at the Ascot Piazza and met for drinks at the Holiday Inn. Now that supermarket shelves were devoid of the bare necessities Melusi shopped across the border on their behalf. His clients drew up long grocery lists which included treats like Cadbury chocolate bars to two-ply Baby Soft toilet paper to wipe their delicate arses. So every month when he made the deliveries to their opulent homes he got a glimpse into their luxurious suburban lifestyles.

He admired the sweet-smelling madams who were no longer white but black with long flowing silky hair that reached their waists. Even in the darkest days when the city was plunged into gloom their diesel generators roared. Their money cosseted them from the vagaries of the life that the rest of them were forced to endure. It did fill him with envy because deep down he also wanted a piece of that life. Wanted it so badly. The longing made his heart ache even more as they drove further down past Selbourne Park, named after the lord, also housing people with ‘airs’. It was a new and mushrooming suburb for Bulawayo’s upper middle class. A new breed that had risen by gambling on the rising and falling fortunes of the Zimbabwean economy.

On its left stood NUST, the National University of Science and Technology, which churned out thousands and thousands of graduates into an economy that could not absorb them. Still its doors opened year after year, admitting hopeful students on one end and spitting out disillusioned graduates on the other. Further and further he steered the car till there was no sight of suburbia; only sprawling plots of lands with lone homesteads falling apart at the hinges. Unploughed fields of maize were populated with drooping maize stalks with dried leaves. These were interspersed with stretches of sprawling savannah grassland and acacia trees. The boundaries of some of these plots were demarcated by straggly strands of barbed wire, hugged fiercely by dead thorny tree branches.

The mundane scenery carried them as far as Esigodini whose decrepit exterior did not allude to the fact that it housed Falcon College, one of the country’s prestigious boys’ schools, which grew from the floundering remains of the Bushtick Mine. Esigodini faded into the distance as the road led them to Mbalabala, traversing the waterless Mzingwane River. Melusi slammed on the accelerator hoping to escape the dreariness of the savannah bushland.

They stopped in Gwanda to refuel and pick up one more passenger; a middle-aged man whom Melusi referred to as ‘Malume’ settled into the car. For over a distance of 50 kilometres they were all subjected to Malume’s diatribe about his ordeal of being laid off by a cement company he had served for over ten years. For the remainder of the time he regaled them with jokes. Momentarily their anxiety about the journey was forgotten.

It was close to midnight when they finally drove into Beitbridge. All Melusi’s cargo was fast asleep; including Malume. Beitbridge was a small border town south-east of Bulawayo. Naked billboards and ghost road signs greeted them. Once upon a time there had been a fabulous idea to connect Beitbridge and Bulawayo by rail. It was another of those grand ideas that had lost steam; got derailed. Still Beitbridge lived on in all its noisy commotion. Night or day, the border town never closed its eyes. Its gateposts were always wide open like the thighs of a prostitute ready to receive and expel the constant stream of traffic that descended on the border town. The Express Holiday Inn thrived by selling bed nights to the more discerning traveller. As did the prostitutes who derived an income by selling their bodies to horny truck drivers at the service stations. The commercial activity survived by virtue of those who made passage through the town. Beitbridge was nearly always enveloped by a blanket of heat. There were no seasons; it was hot 365 days a year.

That night was no different; the heat was merciless and showed no signs of abating. The air was dry; not even a breeze to gently flirt with the skin. As Melusi drove through the town, the streets were lined with men and women hustling to feed the mouths they had left at home. He left it all behind as he drove to the outskirts of Dulibadzimu Township. He would leave his cargo here for the merciless crossing and hopefully find them again on the other side. The onus was on Givemore to marshal the cargo across the mighty Limpopo, also known as the River of Death. Those deep murky waters were home to scaly, menacing crocodiles. As ominous as these creatures were, they were not a deterrent for hungry Zimbabweans who traversed the river in search of the bright lights of Egoli. The great expanse of water, that spanned a kilometre, stood between them and their dreams. A dream that had swallowed and swept away countless others only to spit out their souls into the depths of the Indian Ocean.