South Africa has something approaching a crisis of undiagnosed mental health issues – Rebecca Davis chats about her new book Self-Helpless: A Cynic’s Search for Sanity
More about the book! 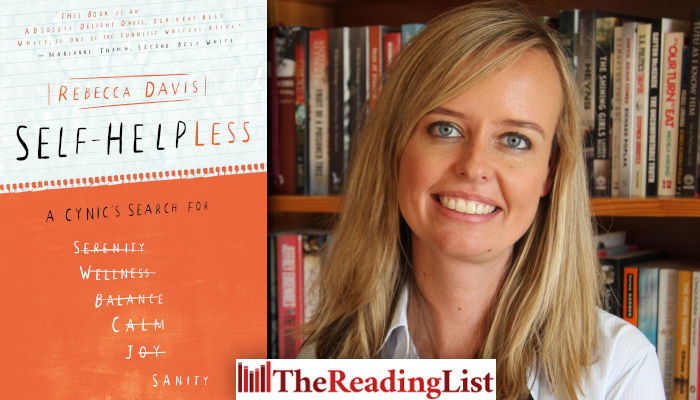 Rebecca Davis chatted to The Reading List about her new book Self-Helpless: A Cynic’s Search for Sanity, a humorous take on the self-improvement industry, out now from Pan Macmillan!

In Self-Helpless, Davis’s razor-sharp wit combines with her acute powers of observation to produce social and political commentary that will have you in stitches even as it informs and provokes you to think seriously about the topics she discusses.

The Reading List: You’ve spoken about how the self-help industry is not a new thing – and how anxiety pills, for example, began being prescribed in America in the 1950s – but do you think we’re reaching a new level of mental fragility?

Rebecca Davis: This is a very difficult question, and I’m totally unqualified to answer it, but that’s never stopped me before! I think there is definitely evidence that we are paying more attention to mental fragility than ever before: in terms of both the numbers of prescriptions written for anti-anxiety drugs and anti-depressants, and the explosion of the self-help industry.

But this alone doesn’t suggest that we are, as humanity, less resilient than ever before. I just think that in the last 20 years in particular, the idea of seeking help for emotional and mental health as well as physical wellbeing has become more acceptable in the mainstream.

The obvious caveat is that this is certainly both age-specific and culturally-specific up to a point. In terms of age, the fact that we’ve seen younger members of the British Royal family talking openly about struggling with depression – to give one example – suggests that there’s less of a stigma attached to that discussion for younger people. One can hardly imagine the Queen or Prince Philip initiating that conversation in public.

And for evidence that this is culturally specific too, we know that in very religious or traditional or conservative environments people are less likely to seek help for mental health issues. South Africa in general, I would say, has something approaching a crisis of undiagnosed mental health issues resulting from both the experienced and inherited trauma and guilt of apartheid.

There’s a lot of carping these days about snowflakes and so on – but in general, I think it’s a good thing that people have found a language in which to discuss vulnerability and anxiety more openly.

The Reading List: This book was sparked by you giving up alcohol – before this, did you ever write and drink? If so, did you find you faced any writer’s block after giving up drinking, or did your writing process change?

Rebecca Davis: When I drank heavily I could barely walk, let alone write. And writing was the last thing I wanted to do when I was drinking: I was drinking to get out of my head, not further into it. Now I’m very grateful for that, because I don’t have any emotional association between drinking and writing at all. Maybe it would be different if I were a novelist – but I write journalism and non-fiction, and I don’t find that booze and facts mix well at all.

The Reading List: You mention a recent trend of soothing self-help books that allow ‘adults to regress to an infantile state of safety and comfort’, and how this trend is not confined to the self-help industry. What do you make of the rise of ‘kidult’ culture? Why do you think it’s so appealing?

Rebecca Davis: Kidult! That’s great. I mean, I think this links to my first answer – I don’t think necessarily that a desire to regress to childhood is a new thing, just that it’s more acceptable to explore. Although I must note that adult colouring-in books, for instance, never explicitly market themselves as enabling you to retreat to childhood. These tactics still get packaged as very adult-appropriate stress-relief methods – so I think we’re still a little way off being able to openly admit that sometimes all we want is for someone to tuck us in and tell us it’s okay to suck our thumbs.

The Reading List: I loved this quote from the book: ‘If traditional religion was the opium of the masses, spirituality is the Oprah of the masses.’ Most of the schemes and remedies you tried out were linked in some way to consumerism. It seems, ultimately, that that is part of the problem. Would you agree?

Rebecca Davis: Yes absolutely – and linked in more or less overt ways. Sometimes the remedies in question simply cost quite a lot of money, which is one aspect of this. The other is the way in which they promise types of self-improvement which basically translate to you being able to perform more productively and more compliantly in the modern labour market, or being able to remove obstacles in your life which prevent you from accessing greater personal prosperity.

And to be fair, maybe that’s a reflection of the stuff I chose to do: if I’d gone all out and joined some ‘Wild Wild Country’-style cult, maybe I would have been exposed to paths to self-enlightenment which involved an eschewal of the capitalist system rather than collaboration with it.

The Reading List: You begin each chapter of the book with a brief description of your experiences in the present tense, which really draws the reader into the story. I was wondering if you picked out any writing tips of value from the – mostly bad – self-help books you read during your research?

Rebecca Davis: When I was a child, my father owned a number of books by one of the pioneering American self-help writers, Norman Vincent Peale. Peale was effectively writing The Secret half a century before The Secret, promising readers they could do anything from beat cancer to get rich by visualising their dreams and thinking positive. Anyway, I loved those books – not for their hokey self-help elements but for the endless stream of case studies that Peale described. I think the most compelling self-help books just tell a lot of stories about people’s experiences, and I’m all about that. I try to use the same trick in my feature writing.

The Reading List: In your Acknowledgments, you mention some authors that you recommend, including Oliver Burkeman, Barbara Ehrenreich and Viktor Frankl’s Man’s Search for Meaning, but do you have a favourite among the more seedy books that you delved into?

Rebecca Davis: There was a part of me that genuinely loved Marie Kondo’s The Lifechanging Magic of Tidying Up, because I found Kondo herself so fascinating and utterly unrelatable. I’m certain she would view me with a kind of pitying disdain.

The Reading List: One thing that I was wondering was, after your dispiriting experience with Dr Musa, did you consider consulting with another Sangoma who was perhaps more … sincere?

Rebecca Davis: Yes. I tried to set up interviews with two sangomas I know personally and I also reached out to the leader of a kind of sangomas’ union, because I really did want a contrasting view there, but I couldn’t make it work in terms of time. It is something I still feel a bit uneasy about, but I hope I make it at least a bit clear that Mr Gumtree Sangoma shouldn’t be taken as representative of every sangoma ever.

The Reading List: Something that struck me as I reached the end of the book is that you come to no clear-cut conclusion. Is this because the journey towards wellness is such a personal thing? Or could we also read it as a more general statement or reaction against the black-and-white thinking that seems to dominate public conversations at the moment?

Rebecca Davis: Both. All this stuff is definitely subjective – which was made clear to me by the fact that my longsuffering wife Haji accompanied me on a few expeditions and we often had extremely different experiences while doing the same thing. And that’s inevitable, right, because the effects of these remedies are largely supposed to be internal, and we all have varying internal worlds – and varying internal states on any given day.

But I also love your second analysis, which makes me sound much cleverer than I actually am. Let’s go with that.