Deon Meyer’s new thriller The Dark Flood will be out in November! 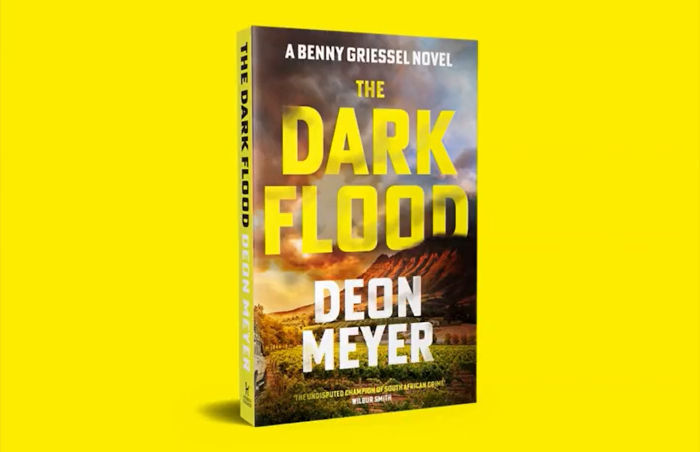 The Dark Flood – the new thriller from bestseller Deon Meyer – is out in November from Jonathan Ball Publishers!

A frustrated Vaughn Cupido looks at Benny Griessel. ‘Benna, just explain one thing to me: Where’s the logic? We live in a country with a huge crime rate, the SAPS has had the biggest brain drain and loss of experience in its history these past ten years, there’s a helluva problem with corruption in said Service, and they let the country’s two best former Hawks detectives search for a student on a binge weekend because his mobile was stolen. Where’s the logic?’

‘I’ve been thinking about that all weekend. There’s a snake in the grass, Vaughn,’ says Griessel.

We are very excited to be revealing the cover of THE DARK FLOOD by @MeyerDeon which is releasing 11 November!

One last chance. Almost fired for insubordination, detectives Benny Griessel and Vaughn Cupido find themselves demoted, exiled from the elite Hawks unit and dispatched to the leafy streets of Stellenbosch. Working a missing persons report on student Callie de Bruin is not the level of work they are used to, but it’s all they get. And soon, it takes a dangerous, deeply disturbing turn.

One last chance. Stellenbosch is beautiful, but its economy has been ruined by one man. Jasper Boonstra and his gigantic corporate fraud have crashed the local property market, just when estate agent Sandra Steenberg desperately needs a big sale. Bringing up twins and supporting her academic husband, she is facing disaster. Then she gets a call. From Jasper Boonstra, fraudster, sexual predator and owner of a superb property worth millions, even now.

For Sandra, the stakes are high and about to get way higher.

For Benny Griessel, clinging to sobriety and the relationship that saved his life, the truth about Callie can only lead to more trouble.

Taut with intrigue, murder and suspense, exploding with action and excitement, The Dark Flood is a masterpiece from the author of Trackers and The Last Hunt.

‘One of the best crime writers on the planet.’ – Daily Mail