She tells it like it is, and some don’t want to hear it – USA Today features Koleka Putuma
More about the book! 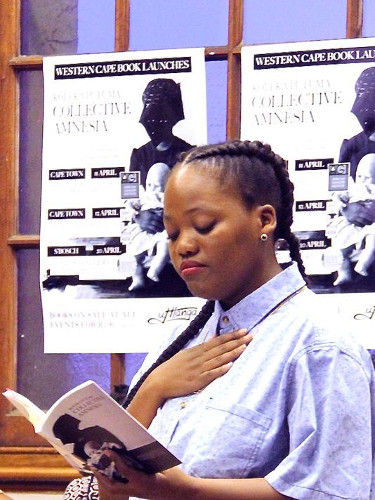 South Africa’s new generation of slam poets, with Koleka Putuma the ‘leading light’, has been featured by Alexa Cole for USA Today.

‘Her voice is velvet. But her words cut like a knife,’ Cole writes.

‘I definitely consider myself the kind of poet that says the things that nobody wants to say, in many ways that can disturb the peace,’ Putuma tells Cole.

Race, religion, womanhood and sexuality: In a society still healing the wounds left by apartheid, Putuma tackles the touchiest subjects with verse that inspires some to stand and cheer; others to blush and squirm.

At 26, she is widely acknowledged to be a leading light in a new generation of “slam” poets who are using the oral traditions of the country’s indigenous cultures, its dazzling array of languages — and blunt honesty — as a path to the future.

Click on the link above for the full story.