Road to Glory series for younger readers puts the spotlight on South Africa’s sporting legends
More about the book! 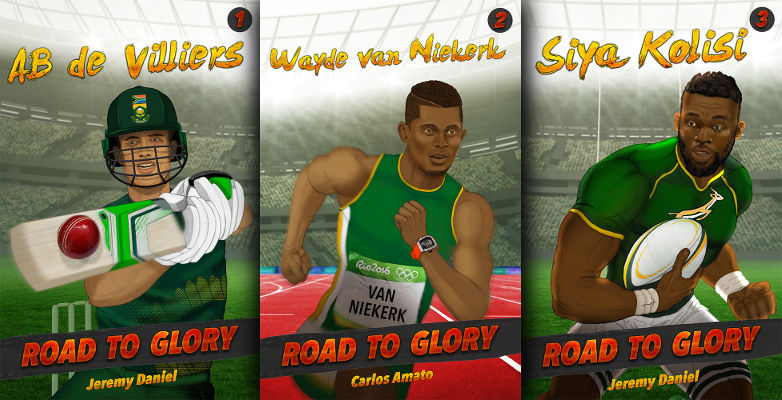 AB de Villiers, Wayde van Niekerk and Siya Kolisi are the first three books in the Road to Glory series, which covers South African sporting legends as they set out on their journeys to becoming national and international stars.

Written specifically for youngsters aged 10–14, it takes the reader close to all the action, and all the ups and downs.

Wayde was quick off the mark from the day he born: two months premature and weighing no more than a litre of milk, his life was in danger. But little Wayde survived and grew to become the world’s leading sprinter.

Wayde van Niekerk tells the extraordinary tale of a boy who defied the odds, time and again. He was small and skinny but he tackled big rivals on the rugby field. And just when he was about to become a world sprinting star, Wayde suffered a series of terrible hamstring injuries. At one point, he was so depressed he almost gave up athletics for good. But his faith, courage and dedication – along with his magnificent talent – kept him going.

We learn that Wayde was deeply motivated by his mother Odessa’s brilliance as a sprinter before his birth – back in the apartheid era when black athletes were unable to shine on the biggest stage. Wayde’s sense of honour also shines through in the story: how he stands up for the weak against bullies, and gives generously to those less fortunate than himself.

In the climax of the book, Wayde flies his family to the Olympics in Rio de Janeiro, where his greatest moment awaits him.

This is a moving story of the rise to fame from humble beginnings of one of South Africa’s most popular rugby stars, written specifically for young readers.

Early on his life, Siya discovered that rugby could be his route out of the grinding poverty in which he had grown up in the Eastern Cape. He worked hard, made sure he was noticed and managed to secure a scholarship to the prestigious Grey College. But he had to adapt quickly to a world he had never encountered, while keeping his roots in the community that he knew and loved.

His hard work and natural ability saw him moving to Cape Town to join the Stormers, trying to break into the Springbok team, and learning to adjust to life at the top of the game that is a national obsession.

Siya Kolisi is part of the ‘Road to Glory’ series, which covers some of South Africa’s sporting legends as they set out on their journeys to becoming national and international stars.

‘AB hopped over the boundary rope and onto the field, grinning at the sight and sound of a packed Wanderers Stadium. He swung his bat from side to side and listened to the crowd roaring his name.’

So begins the wonderfully entertaining story of the rise to fame of one of South Africa’s favourite sporting stars. Written specifically for youngsters aged 10 – 14, it takes the reader close to all the action and the ups and downs.

AB was already building a name as a great schoolboy tennis and rugby player, but when he decided to focus on cricket, the word spread quickly about a talent that could not be contained.

With two brothers a lot older than him, AB learned early how to play hard and never give up. In this inspiring story we watch as AB progresses through high school, then varsity, and learns how to play against the best. In his first Test series, AB struggles and wonders if he’s good enough to make it at this level. However, the outcome is an inspiration to sports fans and readers who love a good story.